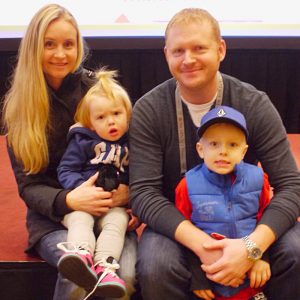 (labeled for reuse on flickr.com)

I don’t often dispense marital advice. Anyone who thinks they have all the answers for every marriage is either quoting platitudes or they are delusional. But I do know a little bit about how men think, and the power women have over the man in their life. This bit of wisdom about finances is for those marriages where you can wisely apply it. This won’t work in some relationships. It is up to you to figure out whether it applies to you.

I’m going to talk about Jerry and Susan. They are fictitious, but their situation is not. In Jerry and Susan’s marriage Jerry happens to earn most of the money. Susan does have a part-time job to help with some of the expenses. In their marriage Susan controls the purse strings. She pays the bills.

Over time, Jerry and Susan decided that they would like to feel like they were making progress in their finances, so they chose to make the move to their parent’s town. As luck would have it, Jerry found a job in the new city even before they made the move. Everything was beginning to look up. They were excited about their prospects.

They moved into their parent’s home until they could find a place to rent. Time went by, one month, two months, three months, five months, and still no place they felt they could afford to rent. Jerry was making decent money, but they didn’t feel it was enough to pay the higher rent.

The dream starts to fall apart

After trying her luck with every government entity in town, Susan was beginning to lose faith in the opportunity promised them by their parents. She could get W.I.C. and Medicaid for the children, but they made too much for food stamps. Susan, who paid the bills became more negative and began to mourn the loss of their old situation in their previous town. Their apartment had been small, but affordable. “Nothing” in her opinion was affordable in their new town.

“It can’t be done. We can’t afford anything here. It is all too expensive.” This became her mantra, and everyone heard it constantly. Eventually Susan got a part-time job on swing shift to try to fill the perceived gap between current wages and their hoped-for prosperity. But after several months she didn’t feel they were any closer to being able to afford an apartment of their desired size any more now than they could when they first made the move.

Her complaints escalated to a constant barrage of negativity that the situation was hopeless. They were actually making as much money each month as their parents, in whose home they were living. They still made daily runs to the local stores for groceries, drinks, and snacks. They continued to buy personal items to add to their collections, and birthdays were still celebrated with store-bought cakes with decorated themes.

The parents tried to talk to them about where their money was going each month, but Susan was insistent that they were accounting for every penny. The relationship between parents and their children was becoming strained.

Eventually, the parents started to look for places they could help them get into that would be theirs, and not just a rental, but it didn’t matter what they presented to Jerry and Susan, Susan insisted they couldn’t afford any rent at all.

Finally, Jerry decided that they would have to move back to where they came from. He was sure he could do better there than they were doing in their new home. When Susan was asked why Jerry was so insistent that they move, her response was that he felt he just couldn’t get ahead in the place where he worked (he was the highest paid employee), and that they knew they could make it in their old town.

So what killed the dream? Were the parents at fault for wanting to offer them the opportunities living in a larger town could give them? Did either Jerry or Susan fail to not work hard enough?

It has been my experience in life that if my wife is unhappy then “ain’t no one happy.” It has also been my observation that when a spouse complains about a lack of money all the time, the other spouse, wanting to please his/her spouse, begins to feel negatively about their current job. After all, “If it paid enough my spouse would be happier. I must be doing something wrong.”

Over time everything gets tainted with the negative flow of words from the person who is supposed to be in charge of the budget. There is an implicit trust in that person and their opinion. If there wasn’t then they wouldn’t be in charge of the budget. If the person controlling the purse strings keeps on bemoaning their inability to make ends meet then what else is a spouse supposed to feel, except that they are personally inadequate in some way.

Humility can go a long way

When I was growing up I used to hear about the women who took their husband’s meager earnings and found ways to make it stretch. Women like Tiny Tim’s mother. Bob Cratchit had grasping Scrooge for a boss, but somehow Mrs. Cratchit kept the home atmosphere positive and upbeat. There was no reason for the children to know they were as poor as they really were.

Look at those women who stretch a dollar in miraculous ways so they can stay home with their children and live on one income. Of course it is not easy, but they praise their husband and make him feel like he is heroically carrying the weight of the world on his shoulders all by himself. And in their world, he is!

Is it any wonder that Jerry eventually soured on his new position, which initially he felt was more rewarding than any job he had ever had? All he ever heard was a message of gloom and doom from his wife that he was a failure at appropriately providing for the family.

Did she ever come out and say such an unkind thing? No, she didn’t. But her constant whining about how impossible it was to make any progress because they couldn’t afford anything said it for her. He heard the message loud and clear.

If our spouse is constantly unhappy, and it is apparent to us that their unhappiness is connected with our job performance or job choice then you can bet we will become unhappy about where we work and will start to seek employment elsewhere. We all read each other’s emotional state and react to what we think is going on with our spouse.

If our spouse appears to be proud of what we are doing, and is making it seem like there is sufficient for our needs in the home then we can feel good about our work, because it is accomplishing what it is intended for, the support of our family. If our spouse is always in a state of misery about our “impossible” financial situation then how can we be pleased with our job if it isn’t doing what our job is intended to do – support our family?

Sometimes a job truly isn’t enough to support a family. And in those circumstances it is important to seek different work or get an additional job. But the peace and happiness of our home is in the balance if the spouse of the person earning the main wage for the home spends all the time available complaining that there is never enough.

It all boils down to the spirit in which we approach our life situation. We can improve our home life if we seek to be supportive and are willing to make the sacrifices so often needed in a marriage.