Why Was Job Considered Perfect?

Why Was Job Considered Perfect? 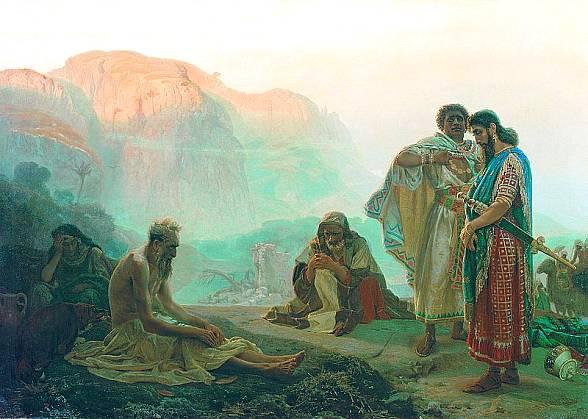 Sometimes I am uneasy about my standing before the Lord, especially when I am suffering in some way. Am I unworthy enough that when I meet him I will want to bury myself under a mountain to hide from his face? Am I worthy enough that we could embrace and I would feel like I am right where I want to be? How do I go from feeling like fleeing to feeling like I have finally found my long-lost friend? The difference is in how much confidence I will have in my relationship with God. If I have failed to live the commandments and learned how to be like Him then when I meet him I will feel woefully out of place and would rather be anywhere else. If I have kept the commandments and become like Him then I will feel right at home in His presence, for we will be alike.

I was reading the Book of Job in the Old Testament. I marveled that he was so confident in his own worthiness before God, especially as his friends tried their best to convince him he must have sinned if he was suffering, because all sinners suffer in this life. NOT.

If you recall, the Book of Job begins by referring to Job as one who was “perfect and upright, and one that feared God.” The Lord had blessed Job abundantly with material things, but Satan approached God and said that it was little wonder that Job feared God and obeyed him, God had blessed Job with so much that Job would be a fool to do otherwise. God did not agree. Satan told the Lord that if he (Satan) was allowed to take away all that Job had that Job would curse God and die. The Lord was so confident in Job’s righteousness that he said Satan could strip Job of everything, and do anything to Job, except take his life. That is what Satan did. Not only did he kill all his children, ruin his businesses, and destroy his flocks and herds, but he afflicted him from the crown of his head to the soles of his feet with boils – painful, itchy boils, oozing with puss.

Learn to minister and how to receive the revelation you need to do it.

Lessons we can learn

Job felt right sorry for himself, and his friends commiserated with him, until Job started to insist to his friends that he had done nothing wrong before the Lord. His friends turned on him and accused him of all sorts of awful crimes against God, but Job said, ‘Bring me to Him and let me argue my case. I know what he will say. He will acquit me, for I have done nothing wrong.’ Job 23:3-7. In the New Testament (Matthew 4:4) we are told that “Man shall not live by bread alone, but by every word that proceedeth out of the mouth of God.” Job pre-echo’s this sentiment when he says this in Job 23:11-12 –

11 My foot hath held his steps, his way have I kept, and not declined.

12 Neither have I gone back from the commandment of his lips; I have esteemed the words of his mouth more than my necessary food. [Italics added]

In chapter 28 Job says that wisdom is the most valuable thing in the world, but it comes only from God, and from nowhere else. Job 28:28 tells us how we gain wisdom and understanding from the Lord.

“… Behold, the fear of the Lord, that is wisdom; and to depart from evil is understanding.”

In Job chapter 29 he tells us what he did to show how he feared or respected God and how he departed from evil. He did it by doing good. This is his own list of good deeds – Job 29:12-17

12 Because I delivered the poor that cried, and the fatherless, and him that had none to help him.

13 The blessing of him that was ready to perish came upon me: and I caused the widow’s heart to sing for joy.

14 I put on righteousness, and it clothed me: my judgment was as a robe and a diadem.

16 I was a father to the poor: and the cause which I knew not I searched out.

17 And I brake the jaws of the wicked, and plucked the spoil out of his teeth.

In the New Testament James 1:27 gives us the definition of pure religion. It is this:

7 Pure religion and undefiled before God and the Father is this, To visit the fatherless and widows in their affliction, and to keep himself unspotted from the world.

In Doctrine and Covenants 121:45 tells us what happens to us if we practice pure religion.

45 Let thy bowels also be full of charity towards all men, and to the household of faith, and let virtue garnish thy thoughts unceasingly; then shall thy confidence wax strong in the presence of God; and the doctrine of the priesthood shall distil upon thy soul as the dews from heaven.

Job lived the doctrine taught in the New Testament and in the Doctrine and Covenants. He practiced pure religion (Charity) and as a result his confidence grew strong in his relationship with the Lord. Even when the Lord stripped Job of everything he had, including his children and his health, when Job evaluated his life he could find no cause for alarm. He knew he was suffering for some reason other than sin. He trusted that God knew the reason, and even though he was not getting answers to his prayers, his faith in his Lord did not falter, for his confidence in their relationship with each other was great. He was willing to suffer, even to death, if that was what God wanted for him, but he would not turn on his Maker or accuse him unjustly. Job knew God too well to do that.