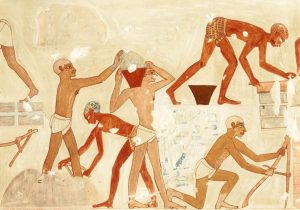 Have you ever wondered why God allowed His covenant people to become slaves for almost 400 years? How could He possibly be okay with that?

This is being written under the category of Gospel Shorts, so it isn’t supposed to be long. The idea is meant to be more thought provoking than it is a definitive explanation of something.

In my experience, most of the troublesome questions in the gospel trip us up because we don’t know the background of the issues at play. We may not understand the customs of the times, the needs of the people, or even the full history that would give the event that troubles us more meaning. In other words, for something to feel comfortable to us, it helps to know all the facts and reasons for what and why something happened the way it did. This is true in politics, history, and in God’s dealings with His children.

I see two issues at play in the story of Israel’s children becoming, and remaining, slaves in Egypt. As a side note – I call it slavery, because they were not allowed to leave and they were in forced servitude. But the scriptures refer only to the Israelites being in bondage to the Egyptians. I’m not really seeing any substantial difference. At any rate, the two issues here, as I see them, have to do with whether the Israelites knew what was going to happen to them when they moved to Egypt, and why the Lord was okay with them becoming slaves.

Did they know what they were in for?

As far back as Abraham, their family knew of what was to come. Here are the words of the Lord to Abraham before Isaac was ever born (Genesis 15:13-16).

13 And he said unto Abram, Know of a surety that thy seed shall be a stranger in a land that is not theirs, and shall serve them; and they shall afflict them four hundred years;

14 And also that nation, whom they shall serve, will I judge: and afterward shall they come out with great substance.

15 And thou shalt go to thy fathers in peace; thou shalt be buried in a good old age.

16 But in the fourth generation they shall come hither again: for the iniquity of the Amorites is not yet full.

As time went on more information was given to Abraham and his posterity. They knew they would spend 400 years in bondage to the Egyptians before it would be time for the Lord to take them into their Promised Land. Abraham was well aware that he would live to see none of his promises of a great posterity fulfilled in this life.

Verse 16 is important as background information. The nation they were to dispossess for God to fulfill His promises to them still wasn’t wicked enough to be destroyed. But they would be in another 400 years. Now there is a piece of information only God could know. So we know that the Israelites couldn’t enter the Promised Land until they had been in bondage 400 years, just long enough for their former tenants to be ready to be destroyed for their wickedness.

The Israelites were a people without a home. They, like Abraham, Isaac, and Jacob, were wanderers relying on the hospitality of others to graze their animals, which was their livelihood. They were a small band then, but before they could take over whole countries they needed to become a nation themselves. Where could they go to accomplish this? The answer the Lord gave Abraham and his descendants was Egypt.

Despite the difficulties of being in bondage to another country for centuries, the blessings outweighed their trials. In those 400 years the family of Israel grew from a tiny band of 70 people to a nation of millions. Exodus 1 tells us of the Egyptians’ efforts to curtail their growth, but to no avail. The Lord continued to prosper them by making them more fruitful than their host nation, despite all of Pharaoh’s efforts to the contrary.

By being in bondage the Israelites were held in one place so they could become a nation. They were no longer forced to wander as nomads as Abraham, Isaac, and Jacob were. In Egypt they put down their roots and began to grow in numbers. And they no longer had to graze their animals in random regions of country. Goshen, on the east side of the Nile was one of the best spots in all of Egypt. And it helped that the Egyptians viewed people who raised animals as filthy. Because of this life view, the Egyptians left the Israelites alone. This began the habit of Israel keeping to itself and not mingling with other cultures. All those centuries by themselves made them into a very self sufficient people.

The Lord has never promoted nor approved of people owning one another. But slavery was a part of life in those times. Almost every country practiced it. And in this case, though not an ideal situation to be in, bondage to the Egyptians was the best answer to the Israelite’s dilemma of how to become a nation without becoming a threat to other nations while they grew in numbers.

The Lord blessed them to grow, despite their difficult circumstances. He never actually “forgot” them. The whole time they were in Egypt He was grooming them to fulfill His promises to their forefathers. He told them before Joseph of Egypt died that one day a deliverer would come, and that his name would be Moses. They were looking for that day. And when Moses showed up declaring that it was time for their deliverance the Elders of Israel believed him.