What Is the Point of the Millennium?

What Is the Point of the Millennium? 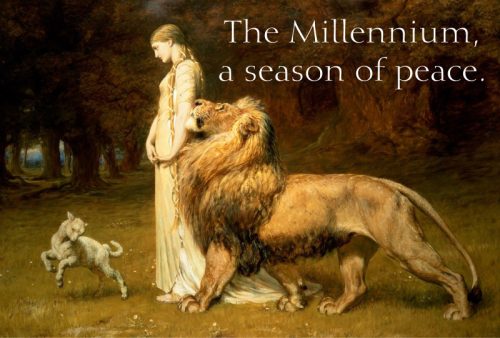 (Labeled for reuse on wikimedia.com)

The title for this article popped into my head in Church today. It was then followed by several versions of the same question. So this article is answering my own question to myself. Does there have to be a thousand year period (millennium) at the end of the world before the judgment? If so, why? Who declared the need for this long period of time, and why does it need to be a whole thousand years?

What we already know

We also know that the transition from what we are experiencing now to the way life will be lived then is known as the second coming. At this time all that is wicked and evil, tainted or polluted in the earth, i.e. all things telestial, will be burned away with Godly fire, leaving only those things which are pure or righteous. The righteous people will be caught up into the air to meet the Savior when He comes with the hosts of heaven, and those remaining behind will be consumed by the brightness and heat of His/their glory.

The Savior’s coming will cause a transition in the earth from being in a telestial state (in time) to a terrestrial state (out of time and in eternity). And the earth will move back to a terrestrial sphere, like where it was before Adam and Eve caused the Fall, which moved the planet out of its place to where we are now.

Those living during that thousand years will not live in sin, but will be righteous. Children will not die at childbirth or in infancy, and people will live to the age of a tree (don’t ask me for an exact number on this) and then, instead of dying they will be translated into an immortal state.

We also know that resurrected beings will walk among us during that time. They will act as messengers, bringing us information on records that need to be revealed so we can perform the temple ordinances for those who have lived since the days of Adam. The Lord will reveal many things, so much so that our knowledge will expand until our knowledge of the Lord covers the earth, sort of like the ocean now covers the earth. Now that sounds exciting. We will learn how the earth was created and the purpose of its creation. We will learn the truth about that which is above, on, and under the earth.

Satan will be bound because of the people’s righteousness. No one will listen to him, so he can’t hurt anyone. The righteousness of the world’s population will last until the end of the thousand years, at which time those who are born will grow up to rebel against God. Satan will once again have great influence over the hearts of many of the people, and the final war will take place, ending with the permanent expulsion of Satan and all those who follow him into perdition. I won’t even address the various stages of the resurrection that are taking place during this period of time.

The period of a thousand years was set aside as the minimum amount of time it would take to get all the temple work done that needed to be done before the final resurrections took place. The prophets have told us that it will take us working 24/7 in the temples for the whole 1000 years to complete the necessary work on time, and even then it will be nip and tuck. Doing ordinance work for many billions of people is a lot of work.

In the premortal world when our Father in Heaven presented to the whole family His plan for our time on earth and for our redemption, that plan included a Savior/Redeemer, the use of agency, and the promise that no one would be denied the path back to living with God if they wanted to walk that road.

The use of our agency means that many will choose, while in mortality, to walk a different path than what the Lord has given us to return to Him. But the Lord has promised that all of the ordinances that will connect us back into the family of God will still be done for every child, without exception, even for those who will eventually decide they would rather not have to make the changes necessary to go back and live with God.

This way no one can say they weren’t given a fair chance to return home. Everything will be done to pave their way back to their Father in Heaven. The only thing stopping any of us from returning to His presence are the choices we make. If we each choose to repent then there is nothing that can prevent our return to live with God. If we choose not to repent, once we have been taught correct doctrine then there is nothing that can allow us back into God’s presence. God is truly giving each of us our heart’s desire.

This really shows the extent of our Father’s mercy. He knew that leaving His presence would mean everlasting separation unless there was a Savior who would pay the eternal price of redeeming His children. He had to be willing to place our care and keeping into the hands of this Redeemer, this Savior. The promise of the chosen Savior was that everything would be done such that if every one of God’s children repented that they would all be able to return home triumphant.

So we do the work for every last living soul, whether or not they choose to accept the work that will save them. We are helping our Savior honor His promise to God that we will all receive the same chances to return home. No one will be disadvantaged.

Part of the Plan

Our Father in Heaven divided mortality into dispensations. As He knew ahead of time how often His children would reject the gospel message he would send among them, He prepared prophets to restore the truths and priesthood authority for the people. These periods of time when the gospel would be on the earth are called dispensations. Every time God’s children reject His message of salvation to them, and kill the prophets He sends them they require a new revelation, a restoration of the gospel all over again. This starts the next dispensation.

Each and every time a dispensation was opened, it was revealed to the prophets that the people would eventually reject the message from the Lord and the gospel would disappear again. But it was also revealed to the prophets that the time when the gospel was to be restored before Christ’s second coming would be different from all the other dispensations. The promises made to all of God’s children to have ordinances of eternal consequence that would pave the way for their eternal salvation would be gathered together in one place in that day, and temples of God would begin to cover the earth.

The promises made to our fathers was that we who were reserved to come in this last dispensation would begin to build the temples that would cover the earth during the Savior’s reign. We would begin to do the ordinance work for them that they could not do for themselves during their lifetime. The last dispensation of time, before the Savior returns to take the earth out of time and back into eternity, is when all the promises of God begin to be fulfilled to offer in physical fact the ordinances of salvation to all of God’s children from every previous generation of time.

The Savior’s commitment to our Father is to make sure this work is done for every child of God to ever come into mortality. He has had all of God’s children committed into His care and keeping, and Jesus cannot go back to our Father and tell Him the work He was commissioned to do is finished until these ordinances of the priesthood have been completed for every person.

As I mentioned before, it will take a thousand years of temple work running 24/7 for us to barely complete this promise before we run out of time. (bad choice of word since we won’t actually be in time any longer).

So the answers to my questions are these:

Who decided there needed to be a millennium? The answer is our Father in Heaven. He made that call before the earth was even created. The point of the millennium is that a period of time is needed to complete the temple work for all of God’s children. Why does it have to be a thousand years? It has to be a thousand years because of the number of children needing ordinances done in the temples. And this means temples running 24 hours a day, seven days a week! Who decided we needed a thousand year period for this work, a millennium? Again, it was our Father’s call.

The millennium has to precede the judgment, since the Savior cannot judge someone until their work has been done for them and they have either accepted it or rejected it. The millennial period, in fact, is the fulfillment of the promise to all of God’s children that their ordinances would be completed for them before they would have to face their judgement with Christ. This levels the playing field and gives every child of God an equal opportunity to repent and accept Christ’s atoning sacrifice before being resurrected and being assigned a kingdom based on the kind of body they receive upon resurrection.