What Is the Gift of Tongues?

What Is the Gift of Tongues? 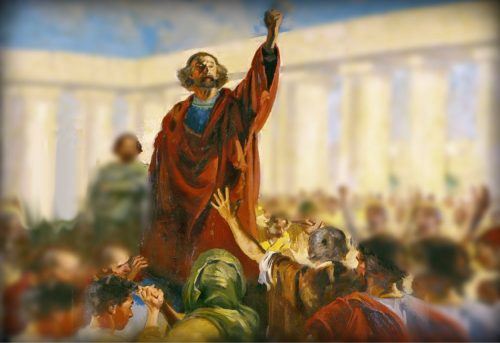 The gift of tongues is one of those spiritual gifts that leaves many members of the Lord’s restored Church scratching their heads.

When most people talk about speaking in tongues, the day of Pentecost is almost always mentioned in the conversation. The day of Pentecost was the day the apostles received the full endowment of the gift of the Holy Ghost. As the apostles spoke to the crowd in Jerusalem, people from all over the Mediterranean were in attendance, and each of them heard the gospel taught in their own language. This begs the question as to who had the gift of tongues, the apostles who were speaking or the people who were hearing their own language – all from the same speaker?

Obviously one speaker couldn’t speak in more than one language at a time, yet everyone heard the sermons being preached in their own language. This outpouring of the Holy Ghost is the first demonstration of the Holy Ghost on a large scale in the New Testament record. This is why everyone refers back to it as a defining experience of this gift.

How does the world see this gift?

If you do a search online for the “importance of speaking in tongues” you will find that the Christian world is very divided in their opinions as to what the gift is, its importance, usefulness, and its need or lack thereof for evidence that the Holy Ghost is present. Some people teach that no believer can ever experience the Holy Ghost without this Pentecostal experience, while others teach that just as the day of the Apostles is over, so too is the need for speaking in tongues.

What do the scriptures teach?

Let’s look at 1 Corinthians 14 to see what Paul taught the Corinthian Saints about the use of this gift. I would like to point out first and foremost here that Joseph Smith, in his JST (Joseph Smith Translation of the Bible) substitutes “another tongue” for every instance the Bible translators used the words “an unknown tongue.” This is an important difference. Using the phrase “another tongue” can easily refer to any other language than that which is the native language of the speaker. Using the phrase “an unknown tongue” could include languages of heavenly origin that are unknown to humans. This is often how the Christian world views this phrase as they try to interpret the meaning of Paul’s passages on this subject.

Here are five points Paul makes about how the gift of tongues works.

Point one: A person who speaks in a language others in the room cannot understand edifies or instructs only himself, since no one else knows what he is talking about. This means the person talking could be discussing the mysteries of heaven, but it would mean nothing to the crowd, because there is no understanding of the language except by the person speaking. Verse 2 says:

2 For he that speaketh in an unknown tongue speaketh not unto men, but unto God: for no man understandeth him; howbeit in the spirit he speaketh mysteries.

Point two: Paul wishes we all could speak in tongues if there is an interpreter available so that all can understand. Without an interpretation of what is being spoken, the gift is pretty much useless except to the person doing the talking. Again, being able to be edified or taught the principles of the gospel is the main reason for the use of this gift. Verse 5:

5 I would that ye all spake with tongues, but rather that ye prophesied: for greater is he that prophesieth than he that speaketh with tongues, except he interpret, that the church may receive edifying.

6 Now, brethren, if I come unto you speaking with tongues, what shall I profit you, except I shall speak to you either by revelation, or by knowledge, or by prophesying, or by doctrine?

Paul belabors this point by saying that even though we should all enjoy the gift of tongues, without understanding by those we speak to, we will just sound like a savage or a barbarian. The whole point of any spiritual gift is to edify or uplift and teach others. Verses 11-12:

12 Even so ye, forasmuch as ye are zealous of spiritual gifts, seek that ye may excel to the edifying of the church.

Point four: The purpose of the gift of tongues is as a sign to the unbeliever of the power of God. It is not meant to be a sign for the believer. The sign for believers is the gift of prophecy (I address that gift in Understanding the Spirit and Gift of Prophecy). Verse 22:

Point five: Without an interpreter present someone who wants to speak in another language should keep quiet and keep their comments to themselves. Verses 27-28:

27 If any man speak in an unknown tongue, let it be by two, or at the most by three, and that by course; and let one interpret.

28 But if there be no interpreter, let him keep silence in the church; and let him speak to himself, and to God.

Latter-day evidence of the gift of tongues

The speed with which the missionaries learn the language, and master their appointed language is the marvel of the world. There is no other organization, no software, no government in existence that can teach people another language as quickly or as well as The Church of Jesus Christ of Latter-day Saints can do it. Many have tried to copy and imitate what happens in the language training centers, but they always fall short of duplicating the Church’s success. Why? Because the purpose of the gift of tongues is to convert people, and that is also the purpose of the calling of a missionary.

The following paragraphs are separate thoughts given by Joseph Smith about the gift of speaking in tongues. I would like to point out that Joseph Smith warns us about being too insistent in pursuing this gift, as it can prove to be a snare and a trap for us by the devil. This is what it has turned out to be for many Christian churches, for many of them base much of their teachings on the importance of being able to speak in tongues.

The following quotes are from Teachings of Presidents of the Church: Joseph Smith.

“Tongues were given for the purpose of preaching among those whose language is not understood; as on the day of Pentecost, etc., and it is not necessary for tongues to be taught to the Church particularly, for any man that has the Holy Ghost, can speak of the things of God in his own tongue as well as to speak in another; for faith comes not by signs, but by hearing the word of God.”

“Be not so curious about tongues, do not speak in tongues except there be an interpreter present; the ultimate design of tongues is to speak to foreigners, and if persons are very anxious to display their intelligence, let them speak to such in their own tongues. The gifts of God are all useful in their place, but when they are applied to that which God does not intend, they prove an injury, a snare and a curse instead of a blessing.”

“We have also had brethren and sisters who have had the gift of tongues falsely; they would speak in a muttering, unnatural voice, and their bodies be distorted … ; whereas, there is nothing unnatural in the Spirit of God.”

“Speak not in the gift of tongues without understanding it, or without interpretation. The devil can speak in tongues; the adversary will come with his work; he can tempt all classes; can speak in English or Dutch. Let no one speak in tongues unless he interpret, except by the consent of the one who is placed to preside; then he may discern or interpret, or another may.”

“If you have a matter to reveal, let it be in your own tongue; do not indulge too much in the exercise of the gift of tongues, or the devil will take advantage of the innocent and unwary. You may speak in tongues for your own comfort, but I lay this down for a rule, that if anything is taught by the gift of tongues, it is not to be received for doctrine.”

Paul moves on to say that “God is not the author of confusion, but of peace …” Speaking in tongues is alive and well as a spiritual gift in the Lord’s restored Church. Most have experienced it through either seeing others learn languages rapidly when they are called to teach the gospel or some few have actually witnessed someone speaking in their own language, but the hearers hear the words in their own language. Either way the gift is for the edification and understanding of those who need to be taught. Babbling in an unknown language is not the gift of tongues, for it does not lead to understanding, which is the key to this gift.