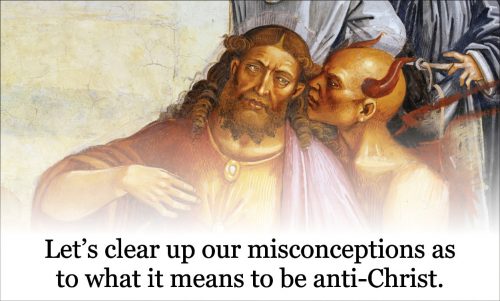 This article was originally published as part of the Come, Follow Me lesson commentary for the Book of Mormon for Alma 30-31. I felt it needed to stand alone as well. What we often think of as the definition of an anti-Christ is usually far too restricted. We need to broaden our horizons.

I challenge you to think deeply about what it means to be anti-Christ. The Book of Mormon names a few men specifically as anti-Christ, because they came out in open opposition to God’s revealed plan for our salvation. They taught their beliefs publicly in opposition to God’s prophets. But notice the differences in the plans they presented. Nehor altered God’s plan by teaching that God would save His children, but stated that He would save all of us in the end, regardless of how we live our lives (hence no accountability for our actions). Korihor was completely different in that he taught that there was no God at all, and that whatever we do in this life is fine, for there is no such thing as sin.

The point I am trying to make by comparing these two men is that there is more than one kind of anti-Christ. Being anti-Christ can be demonstrated in many, many ways. For a moment I would ask that you think about Satan and his attitude toward Christ and we who went against Satan in the premortal world. Do you think or believe that it is even possible for him to do anything to us or for us that would demonstrate in any way whatsoever love, concern, tenderness, or compassion? Remember, Satan is the spiritual polar opposite of Christ. If we ascribe charitable motives to Satan we must also be willing to ascribe the possibility of uncharitable motives to Christ and God, Himself. The plan of salvation is based on this polar opposite model.

If you accept that Satan hates us with the same level of perfection of feeling with which Christ loves us, your ability to see those who are anti-Christ will vastly increase in this life. To be anti-Christ is to preach anything that is in opposition to Christ’s revealed doctrine. It is to teach and espouse philosophies that lead us away from Christ, to elevate man over God, or to deny God and His existence, or His ability to save us. All of these things are inspired by Satan, and promoted by Satan to lead us away from our Father in Heaven. Here is the definition from the Bible Dictionary, as quoted in the manual on page 107.

… one who would assume the guise of Christ but in reality would be opposed to Christ (1 John 2:18-22; 4:3-6; 2 John 1:7). In a broader sense it is anyone or anything that counterfeits the true gospel or plan of salvation and that openly or secretly is set up in opposition to Christ.

People like Nehor and Korihor are good examples of people who set themselves up to take the place of Christ. But institutions and philosophies taught by the world are just as deadly when they don’t lead us back to Christ. In many cases they can be more deadly than a person, because what they promote is an attitude that is often difficult to trace to a specific person or cause, but its teachings are just as dangerous as those taught by people like Korihor. I’ll give examples in a moment.

Just today I ran across this quote from Joseph Fielding Smith.

Satan has control now. No matter where you look, he is in control, even in our own land. He is guiding the governments as far as the Lord will permit him. That is why there is so much strife, turmoil, and confusion all over the earth. One master mind is governing the nations. It is not the President of the United States; it is not Hitler; it is not Mussolini; it is not the King or government of England or any other land; it is Satan himself. (Doctrines of Salvation, Vol. 3, page 315)

Think about how the whole world is governed, the philosophies used to make decisions from the lowest levels of government and courts to the highest levels of both. Are any of them seeking to bring us to Christ? Are they promoting God’s agenda for strengthening the family or trying to help us return to God? As I understand life at this time, the world is increasingly dismissing God as a fantasy of the deranged mind, the same philosophy taught by Korihor. Those who believe in God, let alone Christ, are not to be trusted as being mentally stable. More and more, governments are taking over the control of our families and our homes, dictating how we will raise our children and deciding what our children should be taught. And nothing they are taught leads them to Christ.

As an example of how the world is leading us steadily away from Christ, think about all the ways in which Christ is being erased in the minds of the people. We are discouraged or forbidden to put up Christmas decorations in public places that used to be common and actually promoted to do so. We are not supposed to say “Merry Christmas” because it has become politically stigmatized. We are no longer allowed to pray in schools. There are those who want to remove the term “In God We Trust” from the US coins. The list grows longer every year. These are all ways in which Christ is being erased from the minds of the people.

My point here is not to paint a doomsday scenario, though that is where we are headed. My point is that we need to be aware that we live in a generation of time in which being anti-Christ is not only fashionable, but is demanded of us by those who are already ungodly. In the Church, we teach each other to look to God and His Son for salvation. This is unique in all the world, for The Church of Jesus Christ of Latter-day Saints is the only church on earth that has a correct concept of who and what God is, and about Christ’s role in God’s plan for our salvation. This knowledge is precious. It is the only knowledge that can save God’s children and bring them back into His presence. We need to cherish it and teach it to our family and loved ones. We also need to recognize that we are surrounded and steeped in the doctrines of anti-Christ thinking and philosophies. Only by persistent and consistent work will we pass along to our children the truth about Christ. We just need to be aware that this is the condition of our modern world.

I end today with another quote from President Joseph Fielding Smith, also from the Doctrines of Salvation, just a couple of paragraphs down from the first quote.

Well, Satan certainly has dominion over his own, for his is the power of confusion, strife, bitterness, and class distinction. His is the power of delusion and not one of peace and righteousness. Where can righteousness be found in the world? In Europe, in Asia, in the United States? I say unto you, you are not going to have peace in the United States or anywhere in the world until the Prince of Peace comes to bring it.

Men have taken the law in their own hands, have defied law and order. When strikes are settled in one place, they will break out in another. Why? Because Satan has power over his own dominions, and even among our legislators and the men sworn to preserve the Constitution, we find those who encourage this lawlessness and lend to it their support. This condition does not come out of the kingdom of God. These things will increase until the prophecies will all be fulfilled, and eventually the earth will be cleansed, and Christ will come as King of kings.

Click the link below for a PDF file you can print.