What Happens When “I Live My Truth”?

What Happens When “I Live My Truth”? 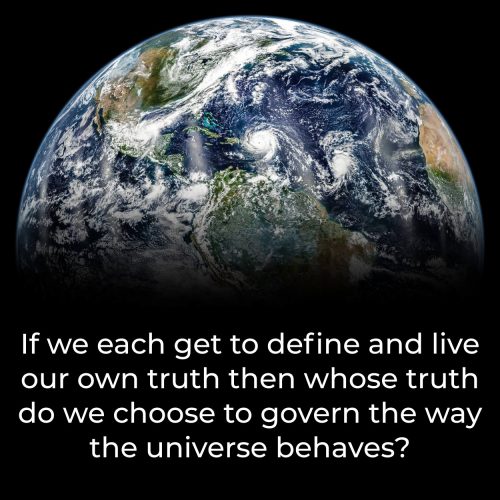 “Live your truth.” That is a popular saying these days. But what does that saying really mean? What is the result of actually sticking by your right to “live your truth”? And finally, how is our truth, whatever we define it to be, going serve us in the eternities?

To live your truth is used in many ways, all of which have slight variations of meaning, depending on who is using it and how it is being applied. That broadness is part of what makes this statement both so difficult to pin down and so appealing to the masses. In effect, it can mean whatever you want it to mean, because you can apply it equally well in any way you choose to apply it.

Here are some examples of how people use the phrase. Tom is into meditation and some of the eastern ways of thinking. In his yoga classes and his meditation readings he is told to look within himself and find his true self. Once he is in touch with his true self whatever this true self dictates he do with his life is what he should pursue. This is how he will be true to himself and live his own truth.

I’m not exactly sure what any of that means, or how it applies to Tom’s life, but there are whole libraries full of books these days that all tell you to look within yourself and find out who you really are and to be true to that identity, whatever it is. By remaining true to your perception of yourself, your personal identity, you are living your truth.

Becca feels she has found her truth in the herbs and natural healing products she makes and sells. They have changed her life and have given her a sense of purpose. She promotes them through her online store and in her social media posts. Living healthy through natural medicines and eating more herbs is her truth.

Bob feels stifled by the Church’s restrictions on how he lives his life. He sees nothing wrong with the love he feels for his significant other. His truth is being denied by the suffocating rules and regulations of his religion, so he goes and finds a different one that will either approve or at least not be critical of how he has chosen to live his life. He can now feel fulfilled, because there is no one condemning how he lives his life, and he feels his happiness can now be lived unfettered by conventional biases toward his choices.

What do these three example have in common? Each person is living their truth in a different way, yet all three are basing their truth on the same thing. All three of them are finding their individual truth in the same location. Can you identify it?

I did a search on the Internet (where else do we search these days?) and found more than half a million references to books, movies, videos, posts, talks, etc. of people advocating living your own truth. That is a lot of people weighing in on this topic, and a lot of people making money off selling this philosophy.

As I look at each of just the three examples I presented previously, the overriding attribute of one’s own truth is that your truth is whatever you decide it is. If your truth comes from a source outside of yourself then it isn’t really YOUR truth, now is it? Hmmm. This could be problematic. Have you ever asked a room full of children or young adults (or older adults for that matter) what they would like to do? In a room of 50 people, how many of the same response do you get? That is the very problem with defining truth in such a personal way. When we are each allowed – nay, encouraged – to define our own truth then no one else can tell us our truth is wrong.

When we live a system of “truth” that is individual and unique to each one of us, doesn’t that make us a society of one – a country of one inhabitant? This brings up the question, “What is truth?” Is truth really so malleable that each person can mold it into whatever shape or definition they choose? Is that how we think the universe is built?

It is precisely because our society has begun to think we can define truth for each individual, and no one has a right to contradict any one person’s truth, that such things we always were taught were absolute, like gender, has now entered the realm of “gender fluid.” If I want to define my gender as non-binary today, but as a toadstool tomorrow, who are you to contradict me? And how dare you use a pronoun to address me that is inappropriate for a spore-bearing fungi!

25 And whatsoever is more or less than this is the spirit of that wicked one who was a liar from the beginning.

Many years ago a politician became filthy rich by making a movie called “An Inconvenient Truth.” Interestingly enough, most of what he presented in his movie was not based on truth at all. And this is the nature of all things that do not measure up to the Lord’s definition of truth. Any principle that cannot stand the test of time becomes suspect as to its truthfulness. And since we only know one source who has, who is, and who will be living in eternity (God) we must rely on His definitions for what truth really is, as anything else falls short by definition.

Now this is an inconvenient truth, that if we want to live a life that is based on actual truth, things as they really are, have been, and really will be, we must get it from an eternal source. Any other source is prone to change. We see this all the time in the sciences. What they promoted as God’s own truth that the earth was flat, fell flat in the end. What they promoted as an earth-centric celestial system, didn’t fly either. Everything that science tells us is the truth today is susceptible to be changed to a different truth as soon as the next discovery is made. The truths of this world are always and forever only as good as our current information, so our “truth” is constantly changing. The only eternally relevant truths must be had from God, who is the only one who knows them.

The manual for Come, Follow Me (Mosiah 4-6) has this quote in it – “I can’t change. That’s just the way I am.” This is what people say who want to live their own truth. The truth of the matter is this. We can live our own truth for as long as we are in mortality, but the rest of the universe is based on the truth as God understands it. All celestial laws are based on His understanding of the way the universe works, not ours. So we may live a lie for as long as we are here on earth, but the moment we leave here and return home, we are back on His turf, living by His rules. So where does living our own truth get us?

In Abraham 3:25 the Lord told Abraham that we were all on earth to be proved, or tested.

25 And we will prove them herewith, to see if they will do all things whatsoever the Lord their God shall command them;

Why are we here? Is it to find our own way by defining our own truth? Are we supposed to decide for ourselves how we will live? (That was a trick question, because the answer to that is yes, we do decide, but if we don’t choose to obey our Father then we have to answer to His laws for our disobedience.)

The purpose of our mortal lives is to see if we will conform to God’s will. Without conforming to His will and doing things His way we will never become like Him and be able to live with Him. That is the whole purpose and point to having scriptures, prophets, priesthood, revelation, prayer, etc., etc. These tools are given to us by our Father in Heaven to help us change to become like Him. We don’t have to, of course, but if we ever want to return and live with Christ and our Father, we will have to accept the truth that there is only one source for truth in the universe, and it isn’t mine, and it isn’t yours.