What Can I Expect From A General Conference Of The LDS Church?

What Can I Expect From A General Conference Of The LDS Church? 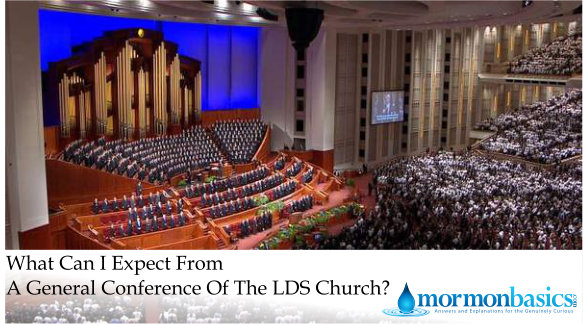 I will admit that this was a learning process for me. I was raised in The Church of Jesus Christ of Latter-day Saints. The semi-annual (twice yearly) General Conference is as normal to me as Sunday Services. What I was not prepared for when I sat down to write this was how other people have “church” conferences.

I’ve been to business conferences, tech conferences, association conferences, but never a religious conference put on by another faith. I had to do some research for that. What I found was that much of what is out there for a religious conference is like a business conference, except that everyone is there to learn how to solve administrative and ministerial challenges in their individual churches. You pay a conference fee, book your flight, hotel, and car. You go and mingle and get inspired and hopefully come back with great ideas for how to spread the word and meet your challenges. This is ABSOLUTELY nothing like the LDS General Conference. We are not even talking the same language here.

Since there is so little in common with conferences that are had in other faiths, let’s lay some definitions and ground rules for the General Conference that The Church of Jesus Christ of Latter-day Saints holds every April and October, like clockwork.

1.  This conference is a gathering of the entire church population around the globe. We tune in by way of television, radio, satellite feed, and Internet. This conference is for every member of the church, old and young, singles and families, church leaders and lay members – everyone.

2.  The first weekend in April and the first weekend in October is when it is held. We have held them for more than 183 years this way. Each April Conference is the annual meeting. Each October meeting is the semi-annual meeting. Every year, twice a year, the entire church gathers around the radio, television, in church houses, and at the headquarters of the church in Salt Lake City to listen to our leaders speak to us as the members of the Lord’s church.

3.  As a general rule, only the leaders of the church speak. These leaders include members of the following groups:

4.  Not everyone in #3 above speaks. Thank heaven’s. No one can sit still that long. Only selected members of these organizations speak. Oh, and the leaders of the Relief Society, Young Women’s, Primary are always female.

5.  We don’t have all of them speak in one meeting. A week before the General Conference there is a General Relief Society Conference for all the women of the Church. That meeting is now held only at the October Conference. They hear from a few selected leaders (men) of the church and from the leaders of the Relief Society, and of the Young Women’s organization.

6.  The weekend of General Conference on Saturday, there are two, two-hour meetings called sessions. The first session opens with a talk that is generally a welcome given by the prophet, followed by talks from several leaders of the church. The Saturday afternoon session is the business session. This session is where we learn about the growth of the church worldwide, we hear the audit report and learn about the number of new chapels, stakes, missions, and temples being built around the world. In one of these sessions the plans for the new temples to be built are announced to the membership. It is very exciting to see where the next ones are going to be.

7.  On Saturday evening there is a General Priesthood meeting for all the men in the church. This meeting is now held only during the April Conference. It is also a world-wide broadcast and is especially important to the fathers and their sons who hold the priesthood. Since we are a lay church, all worthy men and young men hold the priesthood.

8.  Sunday also has two, two-hour sessions that are broadcast around the world.

Okay, that is all the boring statistical stuff that you will experience the first time you watch Conference anyway. What makes General Conference such a big deal is this – we believe in continual revelation. The words of our prophets and apostles are the Lord’s counsel to our families for the next six months. To be able to listen to the Lord’s servants deliver to us what the Lord wants us to focus on for the next six months is a privilege. These talks are inspirational, doctrinal, funny, and serious. We all have our favorite speakers, and hope to hear from them at each Conference.

We do not get up and wave our arms or walk around during General Conference. The only people who go anywhere are the speakers, who go from their chairs to the podium and back. We do get to hear from amazing choirs, like the world-famous Tabernacle Choir. We also hear from young adult choirs, youth choirs, and other choirs who all sing beautiful and reverent music that stirs the soul.

Do some research on what the members of the church are saying about Conference. Do a search on #ldsconf to see who is writing about the church’s General Conference. Spiritually speaking, it is like having Thanksgiving or Christmas twice a year. This is something we all look forward to.

If you would like to participate in the next General Conference of The Church of Jesus Christ of Latter-day Saints, go to lds.org. The link to the conference information is on the front page. You can listen to the talks in any one of many, many languages. They are translated live as they are given so that people from around the world can hear the conference in their own language.