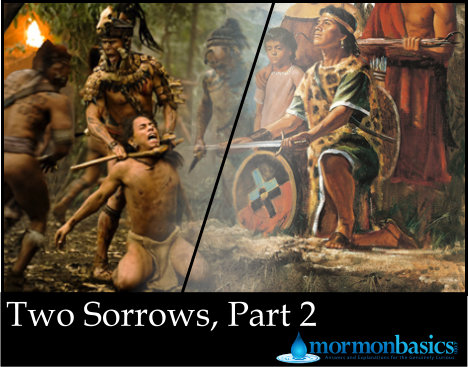 The scriptures refer to godly sorrow and worldly sorrow, or the sorrowing of the damned. In this two-part series we look at the difference between the two, so you will be better equipped to judge which kind of sorrow you experience when you sin. Come on, fess up, you know you do it. We all sin. The question is what kind of sorrow do we express when we sin?

In part one of this article we discussed worldly sorrow or the sorrow of the damned as it is sometimes called. In part two we look at godly sorrow or the kind of sorrow that brings repentance.

When discussing and describing sorrow in the scriptures, more attention is placed on godly sorrow than on worldly sorrow. Worldly sorrow or the sorrowing of the damned is counterproductive, and only brings ruin in its wake. Godly sorrow, though difficult, is ultimately productive, because it produces humility, repentance, a change of heart, and righteous living, which brings joy. But isn’t sorrow, sorrow? How can sorrow bring such different results?

Attitude. It is all in the attitude. We all sin. That is a given, but why we sin or how we choose to react when we sin, and especially when we recognize that we have sinned, is what makes all the difference. Meet Francine and Bonnie. Francine and Bonnie do not know each other. Both women are basically good people, and have led a decent life up to this point, but a parting of the ways is about to happen.

Francine and Bonnie are both in real estate, and have similar sales come across their desks. Both women have some financial pressures building up at home, and could really use some extra money right now. As they are looking through their paperwork for this particular sale, they both overlook a small, but significant mistake in the paperwork that could net them several thousand additional dollars on this deal, money they both really need. Innocently, they both close their deals, and are ever so grateful for the extra cash. But now the sellers come back and call them on the mistake, and want their money back. 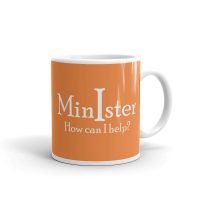 Let people know you are available to help with an I Minister mug. No words needed.

Francine recognizes that it was her mistake, and feels that honesty, reputation, and a clear conscience are more important to her than the hardship losing this money will cause. She apologizes for the error, and arranges for the money to go back to the seller. Bonnie, on the other hand, feels a sudden sense of indignation. She is frustrated with life right now. She worked hard for this commission, and technically the seller’s signature was on the document, and she didn’t legally have to give back the money. She feels put upon for feeling like she has to do this, and her resentment grows as she struggles to decide what to do. She convinces herself that she is entitled to that money, and her friends agree that she shouldn’t have to give it up. There are words exchanged with the seller, and not pleasant ones. She finally gives back the money, but holds on to her resentment for having to lose those precious funds.

This is the difference between godly sorrow and worldly sorrow. Francine can meet the seller anywhere at any time and they can be friends. She struggled at home, but learned to make due without the extra cash, and Francine worked harder to make her next sale. She has a clear conscience, and is right with the Lord and those around her. She is free, physically, socially, emotionally, and spiritually.

Bonnie, who fought the feelings of guilt and the pricking of her conscience, is bitter, and resentful. She feels cheated and put upon. She has ruined any real chance at having a friendship with her seller. She has justified to herself her own behavior, and is now more protective of the wording in her contracts than ever before. She has damaged her reputation. She is still free physically, but she is fettered or chained to some degree socially, emotionally, and spiritually. Each time she fights her conscience she will become more of a prisoner to her feelings and behavior, and more addicted to her self-centered attitude.

This example is meant to demonstrate how the same situation can bring about either kind of sorrow. One sorrow comes from God, and the other from Satan. Which we choose to experience is up to us. Ask yourself which sorrow was really and truly easier to experience. Bonnie is still suffering from the results of her sorrow. Francine let her’s go early on and it is a thing of the past. Bonnie has restricted herself a little by cutting off an opportunity for a friendship, limiting her ability to have a clean reputation, is harboring resentments, and justifying her destructive behavior. Each time Bonnie chooses to experience worldly sorrow, she will go through more of the same. Each time Francine chooses to go through godly sorrow, she will experience more of the same for her as well. She will have a clear conscience, better reputation, more confidence with those around her, and with the Lord.

Do both women suffer for the sin when they commit sin in their lives? Of course they do. But the outcome of that sorrow takes them in opposite directions. Look at the picture at the top of this article. On the left are people who have rejected the truth and embraced a life of selfishness and self indulgence. They have become ultimately prepossessed with their own wants, and are now willing to kill to take what they want, and when offended, are willing to kill for the offense. Satan’s “virtues” of hate, pride, greed, and revenge have become their ruling passions.

On the right are some people who have been like the people on the left, but decided that they weren’t happy that way, so they are burying their weapons of war, and they made a covenant with God to never kill again. Rather than kill, they suffered themselves to be killed in cold blood so they could face their maker with a clean conscience and a pure heart. These are the people of anti-Nephi-Lehi in the Book of Mormon. Their lives were ruled by Christ-like virtues of meekness, patience, forgiveness, inner peace, and love for one another. They went from one set of virtues to the other by choosing to experience a different kind of sorrow.

As long as someone has not sinned away the ability of the Holy Ghost to touch their hearts, anyone can repent and be converted. All of us have to suffer for the sins we commit, but the beauty of the atonement is that we will only have to suffer for part of the sin, not all of it. Christ has already paid for the sin, we only have to suffer enough for him to see that we are truly sorry for our sin. When he forgives us we are free from the guilt and pain of what we have done. Does that free us of all consequences of our sins? No, it does not. If I smoke today, and quit five years from now, my quitting does not erase the damage I have done to myself during the years of smoking. I may still get cancer. But I can live with the consequences of my actions if I know I have been forgiven for my sins.

The Lord wants us to have joy in this life AND in the world to come. We can gain peace and happiness in this life by learning to be humble and obedient to the Lord’s requirements for our forgiveness. There is no need for us to suffer the spiritual consequences of unrepented sins. There may be darkness and suffering tonight, but there is joy and light in the morning if we seek the Lord in all our ways, all our days.