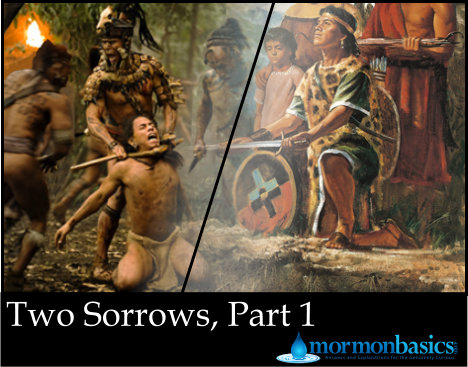 The scriptures refer to godly sorrow and worldly sorrow. In this two-part series we will look at the difference between the two, and you will be better equipped to judge which kind of sorrow you experience when you sin. Come on, fess up, you know you do it. We all sin. The question is what kind of sorrow do we express when we do?

In Mormon 2:8-15, Mormon is leading the Nephite armies. For a brief moment he believes they are repenting of their sins. His hope begins to rise, knowing that if they experience godly sorrow they will find joy. But as he watches them he realizes that they have the sorrow of the damned, and he explains why.

Mormon knows that repentance will prevent their destruction, but the people have hardened their hearts and will not repent, so destruction is guaranteed. Their wickedness led to blood and carnage throughout the land. All civil order had long since vanished.

9 And now, the Lamanites had a king, and his name was Aaron; and he came against us with an army of forty and four thousand. And behold, I withstood him with forty and two thousand. And it came to pass that I beat him with my army that he fled before me. And behold, all this was done, and three hundred and thirty years had passed away.

10 And it came to pass that the Nephites began to repent of their iniquity, and began to cry even as had been prophesied by Samuel the prophet; for behold no man could keep that which was his own, for the thieves, and the robbers, and the murderers, and the magic art, and the witchcraft which was in the land.

Why did he think they were repenting? Because they were crying as had been prophesied. There was so much witchcraft and sorcery in the land that no one could keep anything. Nothing was safe.

11 Thus there began to be a mourning and a lamentation in all the land because of these things, and more especially among the people of Nephi.

12 And it came to pass that when I, Mormon, saw their lamentation and their mourning and their sorrow before the Lord, my heart did begin to rejoice within me, knowing the mercies and the long-suffering of the Lord, therefore supposing that he would be merciful unto them that they would again become a righteous people.

Mormon had received forgiveness for his sins, and knew of the mercies of the Lord. He assumed that their sorrow would lead them back to God and that they would receive these same mercies, so he rejoiced in his heart.

13 But behold this my joy was vain, for their sorrowing was not unto repentance, because of the goodness of God; but it was rather the sorrowing of the damned, because the Lord would not always suffer them to take happiness in sin. 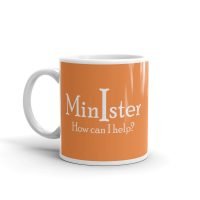 Let people know you are available to help with an I Minister mug. No words needed.

Their worldly sorrow had grown into the sorrow of the damned, and is the individual suffering caused because they could no longer find any happiness in their sin. They sinned because it had become so ingrained that it now defined who they were. They sinned because they were used to doing so, not because it brought them any joy to do it. And even though it brought them only suffering and misery, they had lost the will and ability to chose not to sin, so Satan had complete hold over their hearts, and drove them on to destruction.

14 And they did not come unto Jesus with broken hearts and contrite spirits, but they did curse God, and wish to die. Nevertheless they would struggle with the sword for their lives.

They cursed God because he would not allow them to do what they wanted without consequences. They were suffering for their behavior, but they could no longer change their behavior. They only wished for a speedy death to escape the misery of this life, yet they had no choice at that point but to keep fighting.

15 And it came to pass that my sorrow did return unto me again, and I saw that the day of grace was passed with them, both temporally and spiritually; for I saw thousands of them hewn down in open rebellion against their God, and heaped up as dung upon the face of the land. …

It is not true that it is “never” too late to repent. If we persist in sin, if we insist on sin, and we do it long enough, and with enough passion and determination, the day comes that the Spirit can no longer touch our hearts. We become “past feeling.” At this point it is no longer possible to repent. At this point we are wholly Satan’s servants, and Satan seeks our destruction. This is what happened to the Nephites. They had deliberately sinned away all their opportunities for grace, for forgiveness. So when they died, they died in open rebellion against their God.

If you have ever caught someone in a lie or in a crime, and they are upset, but not willing to repent for what they have done, and they are only upset that they have to suffer the consequences of their sin, you have seen the sorrowing of the damned. This is sorrow that is not unto repentance, but only sorrow for not being able to continue to find joy in the sin. This kind of sorrow is completely counterproductive, and serves no good purpose. People who “sorrow unto sin” only become angry with God when the results of the laws they break begin to be required at their own hands. These are they who curse God and wish to die.

What I have described is only the final stages of worldly sorrow. The beginning stages are evident in all of us when we try to find excuses for our sins. We look for justifications, for reasons to hide our sins. We see this when someone confronts us about our sin and we get upset that someone is “making such a big deal about it.” We seek to excuse our behavior so that we can continue in it. For many it is shown in the hiding of the sin, in secrecy to prevent detection. But when we have persisted in our addiction – and all sin is addictive – long enough, we finally get to the point where we no longer care who sees us sin, we have convinced ourselves that we have a right to our behavior, and we parade our misconduct publicly, no matter who it hurts. Now to the sinner, the sin is all that is important, whether it be pornography, gambling, drinking, stealing, criticizing the Lord’s Anointed, or any other sin.

Seeking to hide our sins, to cover them up, make excuses for them, defend them, or parade them openly – all these behaviors eventually lead to the sorrowing of the damned described so clearly by Mormon.

In part 2 of Two Sorrows, I will talk about the other kind of sorrow, the one that changes us for the better, and brings about forgiveness and joy.