Thy Peace be as a River

Thy Peace be as a River 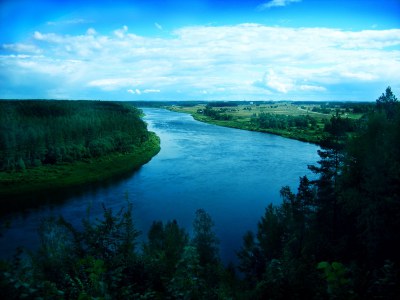 I ran across a verse in the Book of Mormon that talks about peace being as a river. This was one of those arresting moments when your eye just stops on the page and you can’t move forward for a moment. The mental image of peace being like a river had to settle in first.

O that thou hadst hearkened to my commandments — then had thy peace been as a river, and thy righteousness as the waves of the sea.

The Lord is saying, ‘I am the one who is teaching you how to live and behave. If you had listened to and followed my commandments (harkened) then your peace would be like a river, and your righteousness like the waves of the sea.’

What does it mean to be like a river? Picture a river in your mind. What is the setting? Rivers are guarded on both sides by banks of earth. This means they are protected and channeled. Sometimes rivers are shallow and are lined on the bottom with large rocks, so you have rapids and they can be dangerous. That is not the normal condition of a river. Most of a river’s course lies in deeper channels, so the water, though traveling swiftly, appears calm and smooth from above.

When we obey God’s commandments we are guided by those commandments like the banks of earth that channel the river. Our lives, though rocky at times, even out and flow more smoothly and quietly than open water, like in the ocean. When storms come the river may swell, but it is still normally kept within its banks, and quickly subsides to its normal flow. The Lord is asking Israel, ‘Which would you rather have, the tempestuous and uncontrolled rolling about of the open seas or the quiet calm of the river my commandments supply?’

Waves of the sea

In that same verse he uses another water symbol, the waves of the sea to make a point. He tells Israel that if they keep his commandments their righteousness will be like the waves of the sea. The aspect he is referencing here is the constancy of the water’s movement. It is true that waves are bigger at some times and smaller at others, but they never stop. There is always movement in the water. Those who obey God’s commandments will become like the ocean wave, constant and consistent in their performance of good.

The use of natural processes is a powerful tool in the Lord’s teaching arsenal. But in order for us to be able to connect with that arsenal of tools, we need to have had some kind of contact and exposure to the natural world around us. If we have never planted seeds and tended the plants until they were fully grown, we would not have any real idea what was being taught by the parable of the sower. If we have never seen anyone broadcast seeds, which means to take a handful of seeds and scatter them with a horizontal swing of the arm, we won’t know where many images come from in the scriptures. The Lord expects us to stay connected with the natural world around us so we can grasp the imagery and make the connections he uses to instruct us.