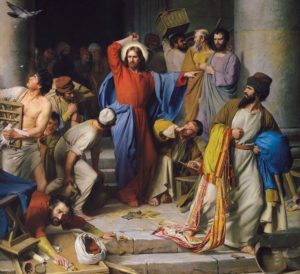 The Come, Follow Me lessons consistently state that their lesson outlines are merely starting points for our study of that week’s material. This week I was struck with some powerful impressions about the emotions that could have accompanied Christ’s cleansing of the Temple. First I would like to present a couple of other ideas that struck me while I read John 2-4.

The first thought that pressed upon me when reading John 2 was that Jesus was doing his master’s will. Immediately I thought, “Wait, Jesus had a master?” The whole point of discipleship is for the initiate to become like the master, the person who has already become what the initiate wants to be like in the future. Jesus is our master. We are his disciples. God was his master, Jesus was His disciple. Jesus states over and over again in the scriptures that he came to do his Father’s will.

As perfect as Jesus was, he was still mortal, and mortality is all about proving ourselves to see if we will do all things we are commanded to do. The exaltation doesn’t happen until after our resurrection. As perfect as Jesus was in the flesh, he couldn’t enter into his exalted state until he had proven himself in mortality by doing the will of his Father. So just as we look to Christ to prove ourselves, he looked to God to prove himself.

Each of us has only so much daily access to the Holy Ghost. We receive more of His influence in our life as we live worthily. Jesus had full access to the Spirit. Through the Spirit Jesus was able to know all things even as a mortal. When John 3:34 refers to “he” you can substitute the name Jesus.

34 For he whom God hath sent speaketh the words of God: for God giveth not the Spirit by measure unto him.

Now look at the Joseph Smith Translation of this verse. The part in red is from the JST.

34 For he whom God hath sent speaketh the words of God: for God giveth him not the Spirit by measure, for he dwelleth in him, even the fullness.

That last “he” must be the Holy Ghost. I believe that this is how Jesus was able to perceive the amount of faith a person had, how he was able to cast out even the most difficult of evil spirits that others would have to fast and pray to cast out, how he knew when it was right to raise the dead, and much more. Because Jesus had the fulness of the Spirit with him, he also had the fulness of all the spiritual gifts as well.

As the Messiah, Jesus was on earth to show all of God’s children God’s love for them. For Jesus to fully fulfill his calling to do God’s will, he needed more access to the Holy Spirit than any mortal has ever had. Only he who was ordained to the holy Messiahship could responsibly handle this kind of access to spiritual knowledge and God’s active will.

I have tried to imagine the emotions that might have gone through Jesus as he contemplated needing to go clear out the money changers in his Father’s house. He took the time to braid a small whip for the purpose. I find it difficult to imagine that he was motivated by anger. Disgust and disappointment perhaps, but not rage. If I had to perform this service for my Father in Heaven, I can imagine that it would require a certain amount of assertiveness.

But what would happen once I started to overturn tables and command people to leave? Surely there were those who tried to resist or who said some rather unkind things in return for the treatment they were receiving. Might I be tempted to feel insult or personal hurt by such comments? Being that demanding and assertive in a public display of power would, for many of us, be a slippery slope of emotions. Such a display could go to one’s head. And how do you keep it all business as you throw people’s livelihood on the ground and chastise them for money changing in your Father’s House?

Not for one second do I believe that Jesus was ever out of control, that he was spiteful or vengeful in his actions to these men in the temple. He was doing what needed to be done to make a point, like destroying Sodom and Gomorrah was making a point. It needed to be done, and as the Messiah it was his responsibility to do it. That is a level of maturity that is beyond my current grasp. Jesus still loved these men with perfect love. He would suffer and die for their sins, just like he did for me and you. Isn’t it interesting that Jesus acted as judge of the people only twice in his ministry, and both times it was to cleanse the Temple of the people’s iniquity.