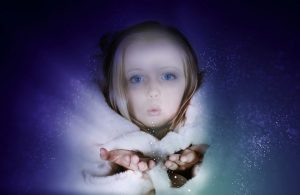 I have been steeped in a Facebook group called Latter-day Saint Ministering. My heart has been moved by the many stories of service, heartache, and kindness talked about in the group. Many of those who are most involved in ministering to the needs of others are, themselves, in the greatest need of being ministered too. But instead of feeling angry that they have been abandoned or ignored by others, they are exercising the charity that drives them and doing all they can to serve others. This story was born of my thoughts and feelings from their stories.

A long time ago, in a village far from here, lived a little girl named Bertie. She was sweet natured as a whole, and very trusting. All in all she was a delight to be around and to have a round. But Bertie had developed a problem; she had become cold. No one could seem to warm her up. Everywhere she went the air grew cool and people had to put on sweaters just to be in the same room with her.

Bertie didn’t appear to notice the difference. She walked around the village as though all was well, while others were bundling up and trying to avoid her because of the cold. The avoidance of others didn’t help her disposition any, and she began to be moody. The gloomier she became the colder it got. This is when things began to get out of control.

After a while, Bertie’s presence began to cause frost on the leaves around her. The water in the pail near her began to freeze around the edges. At the height of summer when Bertie came near, you could see your breath. Clearly Bertie was becoming an issue in the village. Something had to be done.

Poor Bertie couldn’t understand why no one wanted to be around her. It saddened her that she was made to be alone and on the outskirts of the village each day. She seemed oblivious to the changes her very presence created. Loneliness began to take its toll on her. And the more she moped about being lonely, the colder things got. No longer was there just a chill that accompanied her as she walked about. Now there was a genuine cold that enveloped her presence.

The people of the village were used to the cold of winter, but to have winter in their homes at the height of summer was asking too much. Bertie was  no longer welcome in people’s homes. She was now shunned for her icy disposition. As the attitude of the villagers cooled toward Bertie, so did the temperatures around the village. Before long the flowers in the window boxes were wilting, and the vegetables in the gardens were not flowering or producing. Bertie had to go.

There were those who genuinely worried about Bertie, but they couldn’t get passed the chill that surrounded her long enough to find out what had happened to her to cause this frosty demeanor. So they stayed away, and left her to herself. She felt abandoned, and they felt safer.

The sense of urgency among the village elders came when their water source, the lake nearby, began to freeze over. They depended on the fish from the lake for much of their food. Something had to be done about Bertie. She was clearly a danger to everyone.

But what were their options? They couldn’t just abandon her outside of the village, she was only a child. No one could take her into their home because of her frigid presence. What were they to do?

When all seemed lost, and all the grownups were at their wits end trying to solve the problem of Bertie’s chilly presence, a child about Bertie’s age named Sal volunteered to go talk to her. There were some concerns about her safety and health, but they were overridden by the nature of the emergency. It was decided that if the child was willing to risk it, so was the village.

Sal was a year or so younger than Bertie and remembered what Bertie had been like before this frost problem came about. She missed the old Bertie she remembered. Her parents bundled her up in her warmest clothing and stood at the edge of the village while she walked out to the lake to find Bertie.

Sal found Bertie near the edge of the frozen lake. The trees had been green, but the frost on their leaves were quickly turning them brown. The ground was covered in a thick layer of frost and ice. The path to the lake was slippery and the going was slow. Bertie was brooding on a large boulder on the lake shore.

With all the innocence of a child, Sal climbed up on the boulder and sat down next to Bertie. Bertie’s reaction was to wince and lean away, but Sal was unmoved. She reached out a gloved hand and put it on Bertie’s knee and began to talk to her. What did they talk about? I don’t know. Sal just talked about what was in her heart. They must have sat there the better part of the day.

The amazing thing about that day was the change that came over the whole area. It started in the outlying areas first and worked its way in toward Bertie. Things began to thaw. Water dripped from all the frozen branches and leaves, and the grass became visible under foot again. Was it their imagination, or did the sun’s rays actually feel warmer that day?

By late afternoon the whole village seemed to be nearly back to normal. The gardens were perking up. The birds had started singing again, and the warmth of the sun had taken away the chill in everyone’s bones. And out on the lake shore the boulder was now empty.

Bertie and Sal were walking hand in hand back to the village. Sal was no longer wearing her coat and gloves, and Bertie’s countenance was beaming. Everyone was amazed at the transformation. But they were equally puzzled by the change.

Most of the village never did learn the cause Bertie’s frosty disposition, but Sal did. She kept that her secret. Someone had hurt Bertie and made her feel unloved. She withdrew into herself, and as she did so, all around her became colder and colder. When people felt her icy presence they withdrew from her, causing her to feel even more alone and abandoned, which only made the cold worse for those around her.

It was Sal’s personal warmth that had touched Bertie’s heart and helped her to feel loved and accepted once again. It was Sal’s willingness to brave the frosty demeanor Bertie had put up for all to see that thawed her frozen heart. In the end it was love that healed her.

Chances are good that you have met a Bertie at some point in your life – someone who was hurt by the callused comments or treatment of others. The Berties of this life can often be difficult to get close to. They can be aloof, distant, and difficult to talk to. Sometimes they can be downright cold.

The chances are also pretty good that you have me a Sal at some point. The Sals of this life don’t regard the outward appearance or behavior of a person. They look at the person’s worth or value and treat them accordingly. They are unpracticed, unrehearsed, real, genuine, warm, accepting, and loving. It doesn’t matter to a Sal what a Bertie has done in the past, because the Sals of this life aren’t looking at past behavior, they are only seeing someone worth loving.

As we minister to our assigned families or individuals, and as we look for opportunities to serve all those around us, we will most likely run into some Berties who have been hurt by life and unthinking or unfeeling people. They are not damaged goods, but they are in pain. We can all be a Sal and reach out to them, ignoring their knee jerk reactions to protect themselves and just loving them anyway.