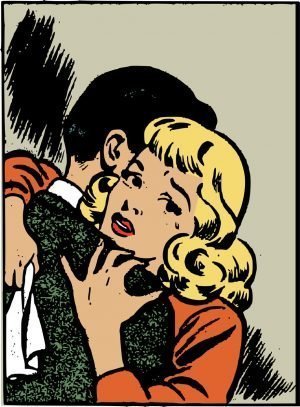 Christlike love, charity is so often talked about in Church and in the scriptures. But what is it really? How do we learn it, and how do we recognize it when we see it? I don’t claim to fully understand it yet, but I have come to understand one aspect of charity I never comprehended before, and that is that despite what else charity might be, one of its defining characteristics is that it is never deserved.

I would like to illustrate what I mean by my statement that love is never deserved by relating several short stories.

I just heard a story that caused many pieces of the charity puzzle to fall into place for me. A man was talking about an experience he had on his mission when he got a new companion. His new companion had been out much longer than he had been, and was cold, unfriendly, unsympathetic, unsociable, and in short, very unlovable. He hated everything about his new companion. He felt like his entire mission was being ruined by this completely unlovable person who was squashing his whole missionary experience.

For several nights he continued to plead with the Lord to help him find some way for him to learn to love his completely unlovable companion. Again, he was told to tell his companion, in the dark, right before they went to sleep, that he loved him. Finally, after several days of this, his companion quietly replied in the dark that he loved him. This experience was never repeated again on any other subsequent night. That night when his unlovable companion replied that he loved him too the missionary said that the Spirit filled their apartment. It was unmistakable, and palpable. From the next morning on they quickly became the best of friends and he said his new companion became one of the best companions he ever had.

They never discussed what happened. It took them a while to overcome the awkwardness of what had happened in the silence of the night, but the Spirit had changed something in both of them that made it possible for this young Elder to love and work amicably with his more experienced companion. And his companion was able to change how he interacted with his younger companion that allowed them to work productively together from then on.

Randall and Isabel (names changed to protect the innocent) had been married for many years. Both were at that stage in life where they needed machines to help them sleep at night. Both needed humidifiers to help them breath more easily during the night. Night after night Isabel would fill Randall’s water reservoir for him before bedtime so he wouldn’t have to worry about having to do it before going to bed. But Isabel noticed that Randall never filled her reservoir for her. If she was lucky he would put the water for filling it next to the machine, but would simply never actually fill it for her. He gave an excuse for not doing it, but Isabel felt like the task was such an easy thing to do that she never believed that his reason was valid.

For years it bothered her that the situation never changed. Night after night she silently filled his reservoir for him, but most of the time she got neither thanks, recognition, nor acknowledgement for what she did. He acted like he just expected it to be done for him. He never complained if she didn’t fill his machine with water, but neither did he ever demonstrate any gratitude for all the times she filled his machine for him.

Inwardly she railed against him for this unjust and unrequited kindness. She felt she deserved to have her sacrifices for him at least acknowledged, if not returned in kind. It was such a small thing that she was embarrassed that it upset her so much.

She prayed to learn how to continue to do this “act of kindness” every night without feeling so negatively about it. She couldn’t find a valid reason for not doing it each night, but neither could she do it without noting to herself that this was a very one-sided kindness.

One night as she filled his water reservoir she thought to herself, “He doesn’t deserve this.” And almost before the thought was completed another thought pushed its way into her mind that said, “It doesn’t matter.” Isabel wrestled with that thought for a while. Why didn’t it matter? Shouldn’t it matter? Didn’t she deserve to be acknowledged for what she was doing for her husband? Shouldn’t Randall be somehow required to respond to what she was willing to do for him? It didn’t matter what questions Isabel shot back to the Spirit as she tried to argue her point, the response was always the same, “It doesn’t matter.”

As I was journaling about a paragraph from the 2019 Come, Follow Me manual on the New Testament (page 94), I was stopped in my tracks by these words.

In every word and deed, Jesus Christ exemplified pure love—what the Apostle Paul called charity (see 1 Corinthians 13). At no time was this more evident than during the final hours of the Savior’s mortal life. His dignified silence in the face of false accusations demonstrated that he “is not easily provoked” (1 Corinthians 13:5). His willingness to submit to scourging, mocking, and crucifixion—while restraining his power to end His torments—showed that He “suffereth long” and “beareth all things” (1 Corinthians 13:4, 7). His compassion toward His mother and His mercy toward His crucifiers—even during His own incomparable suffering—revealed that He “seeketh not [His] own” (1 corinthians 13:5). In His final moments on earth, Jesus was doing what He had done throughout His mortal ministry—teaching us by showing us. Indeed, charity is “the pure love of Christ” (Moroni 7:47).

In Randall and Isabel’s case, Isabel finally realized that it is possible to love someone with a purity of heart and a completeness of commitment even when nothing is being done to apparently “deserve” that love. Having love returned for love given is not a requirement for love being given. Love, in and of itself, has its own rewards. We can love our children, our neighbors, our enemies, and even our spouses with a pure heart full of love, without any expectation of reward, acknowledgement, or reciprocity (return). And the amazing thing is that we can still find joy in that service.

Our ability to love others, independent of their response, heals us, makes us happy, and brings us peace of mind and heart. This is what I am learning about loving ungrateful children, unkind family members, rough or intolerant neighbors/businesses, and about those who don’t see the world in the same way I do. This is a lesson we can take from the Savior’s last hours in mortality, and from His sacrifice in Gethsemane.

What allowed Jesus to suffer like He did without feeling ill used, indignant, abused, neglected, unacknowledged, unappreciated, and a hundred other negative emotional descriptors? The answer is that His love does not depend on our response. He loves us even though we don’t deserve His love. We haven’t done anything to warrant or deserve the suffering he went through on our behalf. Despite our ignorant behavior, our rebellions, our selfish attitudes, our judgmental comments, and unkindness toward others, He continues to love us because the very act of loving us makes Him happy.

I think this is the secret to learning how to be charitable. We need to seek the Spirit and ask Him to teach us to love others independent of their behavior, their responses, their attitudes, their rejection of our efforts, or their attacks on us for demonstrating that we love them. If we will seek for this kind of love, a love that becomes the ruling emotion of our lives, a love that stands independent of all other attitudes felt or shown by others, the Spirit will be able to teach us how to have charity, that pure love Jesus demonstrated for us every hour of his short, but perfect life.

for a PDF version of this article.