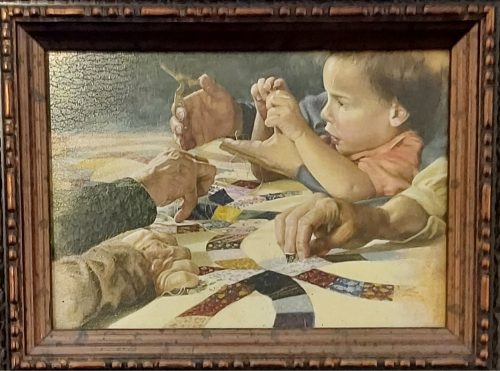 Despite our views to the contrary, we all live in an all-to-perfect world. Our tolerance for anything less than complete and whole has gone by the wayside in many cases. This is a story of someone who knew the value of things that were less than perfect.

We now live in a world that is designed to be tossed. If something breaks it is easier, and often less expensive to throw it away than it is to try to fix it. And if only part of something breaks, many times we are unwilling to live with something that is in less than perfect order, so we either give it away, sell it, or replace it.

Unfortunately, we sometimes do this with people as well. If someone at work is a little slow at getting the work done or can’t get it done in the most timely way, they often find themselves back in the unemployment line looking for a new job. It’s just not profitable to keep someone around who isn’t materially adding to our bottom line.

And how many times have you seen someone at Church who is awkward in their teaching, slow to fulfill their assignments, or socially embarrassing to be around? I knew a couple once where the husband had mental challenges that caused him to air their dirty laundry in public, and when he wrote his spelling and grammar were less than stellar. This caused some to avoid talking to him, and to sometimes say unkind things behind his back that they would never dream of saying to his face.

These were the outward appearances only. This man had a good heart, great intentions, and a desire to be one with the ward. But his efforts were met in many instances with less than perfect reception because of his troubles. Seeing him try so hard to connect with others, and to see him fail to do so more often than not was painful to see. He wasn’t the way he was by choice, and he worked hard to appear and act as acceptable to others as he could so others in the quorum would like him.

We have all probably either experienced this kind of situation in life or have had it happen to us. When I was a young teen, I had trouble fitting in with the other boys. It was bad enough that even in my patriarchal blessing the Patriarch told me I needed to learn to get along with boys my own age. Easier said than done. I have always wondered what might be different in my life today in my retirement years if I had learned to get along with boys my own age back when I was twelve. Fortunately, we worked out a system that was acceptable for all involved. They left me alone, and I left them alone. When I went to the weekly Young Men’s activities (Mutual back then), I played the piano and they played basketball. I never had to humiliate myself on the court, and they never had to choose someone who couldn’t play the game for a team member. I missed out on my associations with them, and they with me.

How would the Savior have handled someone like this good brother I once knew? Would he whisper things about him behind his back? Would he steer clear of his efforts to contribute in the ward just because he was socially awkward? Would Christ have let me continue week after week, month after month, and year after year to be alone in Mutual just because I didn’t know how to play basketball?

But what was the alternative for the other young men my age? They were competitive, and if you invite someone to participate with you, no matter what their ability level, you can’t really compete, because that would completely destroy the person who can’t grasp the game or who has no skills. It would frustrate those who were already good at the game. And honestly now, how many people do you know who are so accepting of others that if someone in the group is open and honest and states the obvious, that the insulted person still feels loved and accepted enough to ignore the comment and go on?

Becoming Christlike sometimes requires us to deal with the painfully awkward in both private and public situations. And we need to learn to be gracious and kind in all situations. Despite our hopes and pretenses, people really can tell when we are being two-faced about our stated acceptance when we really find the person socially loathsome. People who are genuinely able to accept others, no matter what they are like, are truly Saints in the real sense of the word.

My wife, Elaine, told me a story about her grandmother and her mother that has deeply impressed me. If you know anyone who has an artistic skill, they can be very exacting with themselves, allowing for nothing but the best to be shown to others. It is a personal pride issue, or possibly a perfectionist issue. Whatever causes the care they put into their creations, they derive a great deal of satisfaction from their craft. They would never give something as a gift that wasn’t the best they could create.

Elaine comes from a long line of quilters. I’m talking hand quilting, like it was done more than 100 years ago before machines took over the field. Women spent hours and hours talking to each other while gathered around someone’s latest quilt as they prepared it for the next wedding, birthday, or some other special occasion. This was the old fashioned quilting bee. These quilts were show-worthy creations.

As another example of those who are consumed by their hobby or craft, if you were a mechanic and were rebuilding a car, would you let someone who messed up everything they touched come and work with you on your car? If you were famous for your baked goods, would you just as proudly invite someone over to spend time together baking, knowing that there was every chance that what would come out of the oven might be a disaster? This is what it was like when grandma’s friend Lettie came to visit.

Elaine would spend hours under the quilting frame listening to the conversations and watching them make their small, measured, delicate stitches in the quilt. Her grandmother was known for the quality of her quilting work. This is Elaine’s story about her grandmother’s love for Lettie, her neighbor, in Elaine’s own words.

Typically, grandma would have a quilt on the frames in her front room where visiting family and friends would gather to chat and work together. I have many fond memories as a young child of crawling under the quilt and listening to the pleasant conversation. Although my grandmother was nearly blind she pieced the quilts together flawlessly and made such perfect tiny stitches sewing the soft batting and two layers of fabric together. She taught me to quilt – but as a young junior primary child my quilting skills were not developed enough to help with a “special” quit that was being made for an occasion such as the wedding of a grandchild.

One such special quit was on the frames when her neighbor Lettie came to visit. While aging had caused Grandma to lose her sight, aging had impacted Lettie’s ability to use her hands. As she sat and chatted her stitches were a tangled knotted mess. My mother continued to thread needles for Lettie as she always did for her mother (and in later years I did for my mother) and Lettie continued to grace the quilt with her unmistakable stitches. Lettie returned home after a couple of hours of quilting and chatting, and my grandmother graciously thanked her for all the help on the quilt.

While my mother and grandmother were painstakingly removing the tangled knots and large random stitches from the quilt I was confused as to why they allowed Lettie to help with the quilt in the first place. I received a lesson in compassion, and charity, and thinking of others. While Lettie’s helping on the quilt actually created more work for my grandmother, what was of paramount importance was Lettie’s feelings, and allowing her to serve and feel that her contribution was valued. As the years have passed I have a better understanding of how difficult and painful it was for Lettie’s deformed arthritic hands to attempt the fine motor coordination required for quilting.

Lettie’s stitches were a sacrifice on her part, and how wise it was of my grandmother to graciously accept rather than refuse that offering. How often in life and particularly in the church does someone’s desire to serve, and need to feel needed, far outweigh the value or quality of the service they are able to give? Do we graciously accept and genuinely appreciate their effort and sacrifice rather than judge, or criticize, or reject their offer to help?

How often have you been the “Lettie” in the story of your own life? How were you treated? And how often have you had someone who was a Lettie in your circle of influence that you could either embrace and appreciate or exclude? We all have opportunities to serve and accept the service of others, even though sometimes that service isn’t of the highest caliber. In today’s world, it is a skill worth learning to be willing to embrace anyone’s contribution, no matter the quality or amount, and love them as much as though they were the most important person on earth. Something tells me that this is how the Savior is with me. He is perfect in everything he does, yet he accepts me and values my willingness to do what I can. I suppose I ought to learn to be that way with others.