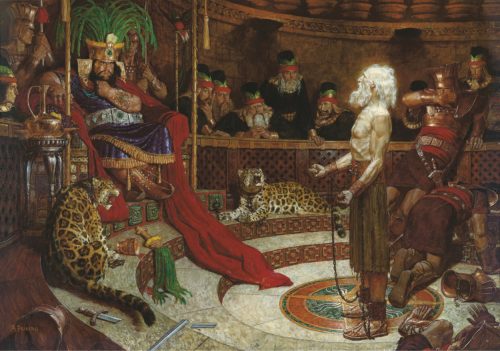 Abinadi comes to us with no information about his upbringing or origins. We see only the last acts of his life as he warns the people of their impending destruction if they don’t repent. His single recorded sermon led to the conversion of one of the most well known prophets of the Nephite people, Alma.

Hundreds of years after Nephi and his brothers died, the current king, Mosiah, was directed by the Spirit to take his people and flee into the wilderness or they would die at the hands of the Lamanites. It was because Mosiah did as he was directed that they found the people of Zarahemla. But there were those who wanted to go back to the land of their inheritance. Zeniff was one of those people. The whole story of Zeniff, his son Noah, and his son Limhi, comes about because of Zeniff’s ill advised longing to return home to a place that was forever lost to them.

The Nephite people were now two nations. The main body lived in the land of Zarahemla, while the rest of them lived in the land of their first inheritance, known as the land of Nephi. The people in the land of Nephi, under their wicked king, Noah, were fast ripening for destruction. The Lord sent Abinadi to give them a chance to repent, which they rejected. Two years later, when Abinadi preached to King Noah and the king’s wicked priests for the last time, Alma was converted by that sermon. Because King Noah wanted to kill Alma for defending Abinadi, Alma had to go into hiding. While in hiding he started to preach Abinadi’s words to the people. After two years in hiding the King found Alma, and Alma had to take the people he had converted and flee into the wilderness, thus dividing the people into a third group.

The greatness of the story of Noah’s people, now led by his son, Limhi, and the people of Alma, is that Alma’s people were put into bondage because they repented, while King Limhi’s people were in bondage because they didn’t repent. This is an interesting example of the fulfilment of one of the Lord’s prophecies. Abinadi warned the people that if they didn’t repent in sackcloth and ashes the Lord would bring them into bondage. Two years later when he returned, the day of grace was past for them, and their fate was sealed. As the history played out we can see that no matter if they repented or not, the decree of God came to pass. They were all in bondage.

Fortunately, the people all repented, but because of their delay in repenting they were in bondage for a good 24 years before the Lord finally delivered them and returned them all to the land of Zarahemla to be reunited with their kin under the reign of King Mosiah, son of Benjamin, son of Mosiah. The PDF file below is the timeline of these people. To get it into this format I had to use a different program to present the information. Because they are split into groups, their whereabouts can become a little confusing. Once you get it straight in your head as to who belongs to whom, and where they are, and why, this part of the Book of Mormon becomes a lot more exciting.

Click the link in blue to read the PDF file.