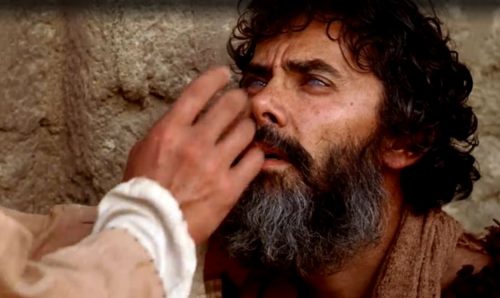 Someone submitted a video for consideration in the Latter-day Saints Ministering Facebook (FB) group. Normally, I don’t even watch them, I just delete them and move on. But this said it was from the church, so I took a moment to watch. In watching it, my eyes were opened to things I had never before considered, and I was deeply moved. I would like to try to express to you what I learned from this church video.

In my mind’s eye, when thinking about, or watching depictions of, Christ’s miracles among the people, what I saw was an oddly dispassionate man going about doing good in a mechanical way. The people he healed were grateful and emotional, but I never even imagined any real kind of emotional response from Christ in the depictions in my mind. He was obeying the will of his Father, and doing good wherever he could. It was all very matter of fact and perfunctory in nature. Please don’t think me cold or detached. I just never felt a personal emotional connection with what the Savior did during his ministry. The bible stories I read were just that, stories. When I read Goldilocks and the Three Bears I don’t get emotional about it. It is just a story. That is basically how I used to see the stories of Jesus – not fictitious, just a retelling of something that happened.

For some reason or other, as I was going through and approving posts today in the FB group I paused when I saw what was obviously a music video by a popular singing group, but the video had the Church logo at the top. I hadn’t ever recollected the Church using an outside group for one of its videos before, so I decided to watch it.

As the video progressed and it began to depict both modern and ancient acts of kindness, I suddenly felt a connection, and I saw a light I hadn’t seen before. For the first time in my life I was looking at Christ’s interactions with those he helped from his perspective, not just from theirs. How did he feel about talking to the woman taken in adultery? What was he feeling for her in her situation? What went through his mind and heart as he healed the blind and mended the bodies of those who were brought to him? Was the good he did just a duty he performed at the behest of his Father or was there something far more deeply personal about these whom he healed?

Consider these things as you watch the video Light of the World. Note how it makes you feel. I have seen it several times now, and each time I see it I weep anew.

God is not random

We can always be assured that what happens in mortality was all ordered and set up in the premortal world before the earth was even created. Nothing in this life was left to chance or accident. I my opinion, those whom Christ encountered and healed were chosen to be the subjects of his miracles in the premortal life. In John 9:1-3 Jesus taught his disciples that the man before them was born blind for the express purpose “that the works of God should be made manifest in him.” Does that sound like an accidental meeting to you?

1 And as Jesus passed by, he saw a man which was blind from his birth.

2 And his disciples asked him, saying, Master, who did sin, this man, or his parents, that he was born blind?

3 Jesus answered, Neither hath this man sinned, nor his parents: but that the works of God should be made manifest in him.

I wonder what marvelous kinds of people these suffering souls were in the premortal realm to merit being the instruments by which the Son of God, Himself would someday demonstrate the power of God to all of Israel, and the world, through his ministrations to them. What a blessing to have the Messiah be the one to personally heal your twisted frame, restore your sight, or stop your issue of blood. But I wander in my purpose. I am talking about those who received of Christ’s mercy and kindness when my purpose here is to talk about what Christ felt about it.

Let me say up front here that I don’t know what thoughts, feelings, expressions, or emotional reactions Jesus had as he healed those he was sent to bless during his ministry. He never really discussed this subject. But based on my personal beliefs in his mercy, kindness, love, and his absolute goodness, his reaction to healing each and every one of these people had to carry with it some profound feelings of joy, love, gratitude, and a sense of honor to be able to bless them and relieve their suffering. After all, is not his desire to relieve suffering what is behind much of what fueled his ability to suffer for us during his atoning sacrifice?

Do you think that Jesus was inwardly thanking his Father for being able to help just one more of his brothers and sisters? Do you think that he was always aware that with each of these healings and acts of kindness he was drawing closer to his ultimate and supreme expression of his love for God and all of us? I am sure now that what I thought was a perfunctory performance of what he was commanded to do by God was much, much more than that.

I will leave you to sort through your own feelings about Christ as you watch and feel what the Spirit puts into your heart with this next viewing. Look at Christ go to heal the blind man and pause before putting his hand on the man’s face. He was tender with each of these people. He was vulnerable with them. His attitude was one of loving kindness and joy in the service he was performing for them. They made him happy. The Light of the World