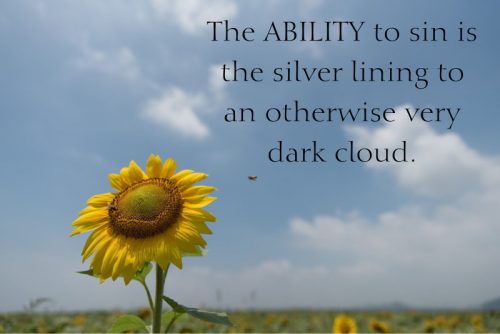 The title is an odd question, isn’t it? Aren’t my sins supposed to block or prevent my salvation? Aren’t sins supposed to be the enemy to all righteousness? Sin is the big taboo. Sin is what got us into this mortal mess, isn’t it? Well, yes and no. Sin actually has a bright side to it.

In our premortal life there was only one perfect person that we know of among all the children of God. That was Christ, our Father’s first born. We were all sinless, yet we were not perfect. We were untried, untested, and still had much to learn.

There was only one way for us to become like God, and that was to learn how to be as good as Christ is. He was so great that he had learned the attitudes and behaviors that qualified Him to be considered a god without having come to a mortal realm to learn those lessons the way we would have to.

He was perfect. He who would come to earth and be known by the name of Jesus already possessed all the main attributes he needed to qualify as a god. (I am putting god in lowercase here just to distinguish between Jesus and our Father. I know that both of them are Gods.)

All of us would have to pass this test or we couldn’t become like our Father in Heaven. At that point, He was the only one who would be able to leave our heavenly home and return victorious. But to do so would go against what motivates everything that God does, and that is His love for His family.

The great Plan of Salvation

Our Father knew that, with the exception of His one son, none of us would ever be able to qualify on our own to become like our Father. Fortunately, there is an eternal plan that has been passed down from generation to generation in the eternities. It makes it possible for those who have lesser capabilities to grow into godhood, with help.

The method requires two main components, someone to repair the damage to eternal law caused by those who are going through the process of learning what it means to become like God, and the ability of those who need to grow and learn to make mistakes, some of them big ones, and not be punished for all eternity for those mistakes.

This is the plan of salvation that our Father presented to us. He would provide us with a Savior, our brother, the one perfect child who had the capacity to pay for the mistakes all of us would make. He alone could pay the eternal price of those violations of God’s laws.

With a Redeemer in place to save us from our own disobedience and our own mistakes, we would be free to make any choice we wanted during our time in mortality, our second estate. Only if we chose to refuse our Redeemer’s payment for those wrong doings would we be required to pay as much of the eternal penalty for those sins (wrong doings) of which we were capable. The rest, the part we were incapable of paying, would still be paid by our Redeemer.

The nature of suffering

There are a few who are the exception to the rule I just stated, and those who will suffer forever are called sons of perdition. For them there will be no end to the suffering they endure, for it will last for all eternity. We won’t concern ourselves with this category in this article.

For those of us who refuse to repent and turn to the Savior, the day will come when we will have to suffer like He did when he paid for our sins. This is what is referred to as spending time in hell. But before we are resurrected, we will have paid all that we can pay for the laws we have broken, and we will be released from our punishment.

Unfortunately, those of us who refuse to repent and turn to the Savior will also remain separate and apart from God for all eternity, but because of our Savior’s grace and love, we will be given a degree of glory and will live happily as singles in the service of our God forever. For we will have received as much as anyone could have hoped for considering the willful sins we committed.

But what about those who choose to accept Christ’s payment for our sins? Do they still have to suffer? Yes, they do. But let me hastily add that the degree of suffering is vastly different, and it doesn’t last nearly as long. And add to that the joy that is given to those who choose to be obedient to God’s commandments that He gave us through His Son.

Repenting is painful. But it is not a punishment for misdeeds for which we were not sorry we committed. Repentance is the sorrowing of the soul of one who genuinely wants to do and be better. Repentance at its core is an instrument of change.

The purpose of the plan of salvation is fulfilled by providing us a way to change our nature from inferior wants and desires to the kind of wants and desires that are worthy of one who would become godly in attitudes and behavior. That is what repentance does for us. It provides us with a way to approach God in sorrow for our disobedience or genuine mistakes and seek His forgiveness.

When we are truly penitent our sins and mistakes are forgiven, and God enlarges our capability to be more like Christ, and hence, more like Him (God). This is a cycle. We keep repenting and striving to become godly in our character and behavior, and the grace of God (and in this I include the whole Godhead) enables an ennobling change within us that literally changes us to be more like them.

How merciful is our Father in Heaven? He has provided the only way for us to remain free to make moral choices, but still not be as good as His only perfect son. We can become like Christ, but for most of us it takes a lot of practice. We must make a concerted effort each and every day to seek God in prayer and to study the scriptures and words of the prophets. We must do everything in our power to become better people today than we were yesterday.

The plan of salvation given us by our Father in Heaven is not an easy path, but it is doable for anyone of His children who want it with all their hearts, for He will enlarge their capabilities to be obedient as they obey what they are already capable of obeying. So thank heavens for the ability to sin. And thank heavens for a way to repent of those sins and not repeat them ever again!

This article is all about how to save ourselves through repentance. One of the great opportunities and blessings offered us by the Lord is to be forgiven of our personal sins as we serve his other children. We hide a multitude of sins as we help others come unto Christ (James 5:20).

20 Let him know, that he which converteth the sinner from the error of his way shall save a soul from death, and shall hide a multitude of sins.

Missionary work, whether for the living or the dead, counts in helping to convert the sinner. Teaching our children righteousness, studying our scriptures, bearing our testimony to others, serving others through ministering; it all counts.