Old Testament 19 – The Reign of the Judges

Old Testament 19 – The Reign of the Judges 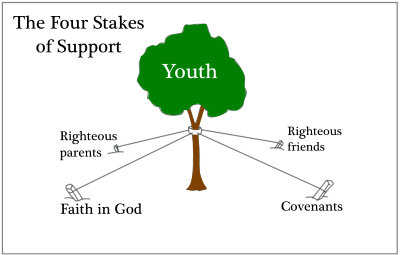 The reign of the Judges in Israel lasted about 200 years, roughly as long as the United States of America has been around. The Judges filled the time between the death of Joshua and the days of Samuel, the prophet. This lesson is centered around four main points. The object of the lesson is to help members “seek influences that will strengthen them in living the gospel in a challenging world.”

The Four Stakes of Support

The lesson uses a short story by President Hinckley to set the tone for the class time.

President Gordon B. Hinckley told of a time when he planted a young tree in his yard but neglected to use supporting takes to help it grow straight. In time, the wind caused the tree to lean badly to one side. President Hinckley realized that if he had tied the tree to stakes, it would have been supported until it was strong enough to resist the wind on its own. (In Conference Report, Oct. 1993, 77–78; or Ensign, Nov. 1993, 59.)

Note that President Hinckley did not say that the tree should always be tethered to the stakes. He said that these supports were most important while the tree was young and impressionable, still needing support in order to grow upright. Once the tree had developed enough of its own root structure, and the trunk was strong enough, the supports became more or less optional, because the tree could now stand on its own in the elements.

You may have those in your class who will feel uncomfortable with the notion of not having the supports mentioned in the lesson. We all need support, but once we have become strong enough it is we who can begin to support those who are weaker among us. That is the message of this lesson. The Lord helped Israel by supporting them for more than 40 years, but when the Lord stepped back and said, ‘Okay, now it is your turn. Go and teach your children.’ Israel had already begun to backslide and failed to teach their children or provide the spiritual support they needed to withstand the influences of the idolatrous cultures they lived with.

How important is it that the parents provide a righteous example of how a child is supposed to live? Where is a child supposed to become strong in the faith if mom and dad are not living up to the standards the child is being told to live up to? The Lord told Israel that if they did not completely destroy the people of the land that those people would become a stumbling block and an impediment to the spiritual progress of Israel. So what did Israel do? They did not destroy the conquered people. Instead, they married into their families and made them tributaries so they had to live and work with the idol worshipping people every day. Is it any wonder that the children, who grew up with idol worshipping neighbors, felt that there was nothing wrong with idol worship?

In Judges chapter four Deborah and Barak are commanded by the Lord to go and slay Sisera and his 900 chariots of iron. Sisera had oppressed Israel for more than 20 years in a most vicious manner, and the Lord had heard the cries of His people for deliverance. Deborah was the prophetess, but she needed a warrior. Enter her friend Barak. Barak lacked the faith of Deborah, though he had other strengths Deborah lacked. This is one of those wonderful examples in the scriptures where we see that the quality of our friends really does make a difference in our lives.

Barak was afraid of those 900 chariots of iron. They were the instrument Sisera had used to conquer and control Israel. Deborah had the spiritual faith and insight to know the Lord’s will. They needed each other. With the confidence Barak had in Deborah’s personal righteousness, he was able to go up and free Israel from Sisera’s oppressive rule.

What kind of value can we place on having righteous friends? We know what happens when we have wicked friends, so what happens when we have friends who listen to the Spirit, keep the commandments, and follow the leaders of the Church? How important is it that we not only have friends like that, but that we become a friend like that? What difference can we make in another’s life when we can bring that kind of support to their wavering testimony or faltering perception of their own abilities?

The story of Gideon is a prime example of how the Lord fights our battles for us. The saints are always in the minority. It has always been that way, and will always be that way, until the Lord returns again. The Lord fought all of Israel’s battles during the 40 years they were in the wilderness. When they came into the land of their inheritance he told them that each and every people they would go up against was stronger than they were, but that He would fight their battles, and they would win. That is what happened.

Gideon had more than 32,000 men in his army. They were going to fight an army the scriptures compare to grasshoppers in numbers. This means there were too many to count. The Lord told Gideon that Gideon’s army was too big, and told him to send everyone who was afraid to fight home to their families. The army was still too large, so the Lord told him to bring the army to a stream and have all the men get a drink. If the men drank from the stream by cupping their hand and drinking from their hand they were put into one group. If they got on their knees and drank directly from the stream, like a dog, they were put into another group. The larger group that drank like a dog was sent home. Gideon was left with only 300 hundred men to fight an army as innumerable as a valley full of grasshoppers.

Gideon spread his 300 hundred men around the perimeter of the valley. Each man held a trumpet and a lantern inside of a pot so the light was hidden. When he gave the signal all of the three hundred men broke their pots so the lights would shine in the darkness around the valley. This gave the impression of numberless hosts surrounding the army in the valley. Then each man blew on his trumpet so the sound came from all around the valley, convincing the opposing army they were completely surrounded, and each man yelled “The sword of the Lord and of Gideon.”

The panic in the valley below was perfect and complete in its effect. The army turned on itself, not knowing who was friend and who was foe. They killed themselves in their fear of their perceived danger. This tactic was inspired by the Lord, and once again showed that the Lord could fight His own battles. He did not need massive armies to make His point or demonstrate His power. When we place our faith in the Lord we can expect and should expect miracles. That is how the Lord works today. That is how the Lord has always worked.

The story of Samson in  Judges 13-16 is a sad one. He was favored of the Lord because he had made covenants with the Lord. As a Nazarite Samson was set apart and considered holy. The Lord fulfilled His promises to Samson’s mother as long as Samson kept his covenants. But Samson started to break his covenants with God, and God withdrew His support and gifts from Samson. After breaking all of the covenants he had made with God, Samson was finally left to himself. He was captured, blinded, and made to grind grain in the Philistine king’s  dungeon. After a long time, and his hair, one of the covenants of being a Nazarite, had grown back, he was able to extract one last favor from the Lord, and he died when he brought down the entire building holding several thousand Philistines in it.

So what are the lessons we are supposed to learn from Samson? First, we are a covenant people, just like Samson. The Lord expects us to live up to those covenants. Second, as long as we live up to our covenants we can expect the blessings of God. Third, if we break the covenants we make we cannot expect anything from the Lord, since all blessings are based on  obedience to the covenant (law) that brings them.

If the parents in Israel had honored their covenants, exercised a little faith on behalf of their children, set a righteous example for their children, and had shown them by example what it meant to serve God with all one’s heart, mind, might, and strength, there was every chance that all the apostasy that took place over and over again in Israel could have been avoided. We don’t have control of the choices of our children, but we do have a responsibility to set the example for them and to teach them to seek after the Lord and work to obtain His blessings. This is what brings happiness.

The Reign of the Judges