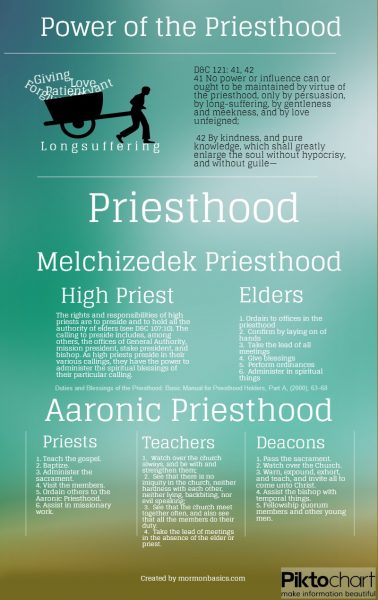 The definition of the priesthood is simple; it is the authority to act in God’s name. For such a simple definition there sure have been many a can of worms opened over it. This post is not an exhaustive treatise on the authority issue, nor is it about the offices of the priesthood, but just an introduction to the idea of there being a real priesthood, one that has actual power to do things that cannot be done without that power.

The Claim  Only two Christian churches really have a leg to stand on when it comes to claiming the authority to act in God’s name, the Catholic church who claims to have had the authority all along since the days of Peter the chief Apostle, and the Latter-day Saints, who claim that God, and Christ himself returned to earth and restored Christ’s ancient Church, complete with the authority to act in God’s name, to the prophet Joseph Smith. If the Catholic church has the priesthood then by definition all other churches have no rights to the priesthood, since they left the only church that had the authority from God to act in his name. All differences of doctrinal opinion aside, that is pretty clear. If the Lord had to come back to earth and restore his Church and his ancient authority once again through Joseph Smith, then that means the Catholic church lost their authority to act in God’s name long, long ago. Otherwise the Lord wouldn’t have had to come back to give it to us again. Call me simple, but that makes sense to me.

How to use the Priesthood The priesthood as an authority-bearing instrument, is used to perform ordinances of salvation, bless the sick, lead congregations of the members of God’s church, and so on. Those who hold this authority are expected, by definition, to be kind, loving, and gentle, and willing to serve in a Christlike manner to all those around them. I can’t imagine the Lord being too happy giving such authority to guide and direct his people to someone who is self-serving and pompous. In the scriptures he has some very choice words for men such as this. I can get into that another time.

Who receives the Priesthood? The short answer is all worthy male members of The Church of Jesus Christ of Latter-day Saints can receive, and are expected to receive, the priesthood. Their ability to serve and perform the work needed of them in the Church is severely limited without the priesthood. Women share in all the blessings of the priesthood, but not generally through the direct exercise of the priesthood. It is the responsibility of every male member of the church to be a blessing in the lives of those whom they serve, who is everyone.

Young men first receive the priesthood when they become twelve years of age. They are only given a small amount of authority, and during their youth are responsible for varying amounts of temporal or physical salvation. Translation: the young men learn how to serve by running errands, cleaning the church house, helping widows, teaching families to keep the commandments of God, and by preparing the sacrament or passing the sacrament in church on Sundays. They also are able to preside over their own quorums of others who hold the same office in the priesthood. The size of the youth quorums are smaller in size than the adult quorums. The older they get the more responsibilities they receive, until they are able to take on leadership roles like leading the congregation or the adult group of men called the Elders quorum. At this point they are able to go through the temple and receive special gifts from God called an endowment. This is when they generally go out and serve as a missionary for the Church for two years. Women also receive their endowment, generally when they go on a mission or get married.

With increased blessings come increased responsibilities. All the adult males of the Church are expected to become worthy enough to be called into local leadership responsibilities as High Priests. High Priests can lead congregations in capacities such as Bishops or Stake Presidents or higher. With the appropriately designated callings High Priests can issue temple recommends that allow others to go through the temple, and all Melchizedek priesthood holders can give blessings to heal the sick, give father’s blessings, and even Patriarchal blessings, but only when called as a Patriarch. It is involved, and this is just an intro to the subject. Remember that the priesthood is the governmental structure by which God organizes and administers the affairs of his Church.

What is the Power of the Priesthood?  The scriptures tell us that the power of the priesthood is the same power by which the universe was created, and is held in order. All planetary systems and orbits, everything is governed by this power. We as humans do not have this power. The power of the Priesthood is shown or demonstrated by God (as it is His power), only in as much as we are worthy of the small responsibilities He has given us as his representatives on earth. So when we lay our hands on a sick person’s head, it is the faith of the sick, and the worthiness and faith of the priesthood holder who is performing the work the Lord told him to do that causes that person to be made well. The priesthood holder is not the possessor of the power, that belongs to God alone. But the Lord has promised us that if we are worthy we can accomplish anything that He commands us to do, even if it be moving mountains with a command, if a) He commands that we do it, and b) we are worthy servants. This is a great responsibility and not one to be taken lightly. It requires great faith that is built by years of service and practice doing the Lord’s work.