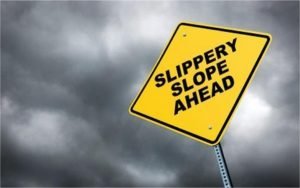 Apostasy has often been compared to a slippery slope. Ever notice that once you are on that slope it doesn’t really matter how you got there? At that point it is only a matter of getting off before you hit the bottom.

How Temples fit in

Anciently, the temple was the symbol of all that the law of Moses stood for. All sacrifices were done on the temple grounds, the Lord’s presence in Israel was manifested by way of a cloud or a pillar of fire at the tabernacle, and the written copy of the law itself was kept within the grounds of the tabernacle. The tabernacle also held the most sacred objects of their religion, the tablets of the law, written by Moses, the vessel containing manna, and Aaron’s rod that flowered.

The tabernacle was originally located in Shilo, which is where the modern area of the West Bank is located, about 20 miles north of Jerusalem. For about 300 years the tabernacle was the center of Israel’s worship. It was king David who moved the ark of the covenant to Jerusalem, and his son Solomon who built the first temple. During all this time the nation of Israel was more or less unified in their worship and acceptance of the law given them by Moses.

The temple was the center of Israel’s worship anciently, just as the focus of our worship today is the temple. We are consistently taught by the leadership of the Church that we need to be in the temple regularly, and be thinking of our temple covenants each and every day. Every General Conference new temples are announced as the Lord is increasingly blessing the Saints with temples for smaller pockets of Saints. There is power in the temples, because this is where we go to make priesthood covenants with God, Himself. This makes the temple a safe haven from the trappings of the world.

When Israel became politically divided, and the Kingdom of Israel was created, they had to travel to the Southern Kingdom in order to participate in temple worship. For the king of Israel, the Northern Kingdom, that was a problem. He feared that his people would place their allegiance where the temple rested, so he embraced the worship of false gods to get his people to worship at home, in Israel. He deliberately set up altars to other gods and planted groves for the worship of other gods all throughout Israel. He almost singlehandedly turned Israel away from God in one generation. This is one of the reasons the Lord preferred Judges over kings. One wicked king can do so much damage in just a few year’s time. And it always takes bloodshed to get rid of a wicked king.

Israel forsook their God initially for political reasons, though no political leader would ever admit such a thing. But what about the Jews in the Southern Kingdom? Did they completely forsake their God for political reasons? The answer is both yes, and no. No, they did not abandon the temple rites and rituals. Yes, they still turned to other gods and committed abominations before God, but kept the form of temple worship. For them, the temple had become a social symbol of their uniqueness as a society. They were proud of their individuality among the nations, even though they embraced the philosophies of the world while putting on a show of devotion to the God they had abandoned in all but name.

Israel, the Northern Kingdom, took the easy road in their worship. By not having to travel great distances to worship at the temple, they were able to worship at home. So comfortable. And with the comfort of their false gods they also received all the permissions they could want to do wickedly and call it good, for that is what their “god” granted them. Unfortunately, the worship of their false gods included the killing of their own children and others by throwing them alive into fire pits to appease their false gods. They were also given permission, in the name of religion, to have orgies and to be unfaithful to their spouse. Once they left the standard of behavior set up by God, anything became acceptable (a problem we have today as well).

Eventually, the Jews in Jerusalem followed their northern cousins down the same road of apostasy, just about a hundred years later. But through it all, they never abandoned their ritual worship of Jehovah. They exercised no faith in him as a society, and they no longer kept his commandments, but they kept those sacrificial fires burning! They put on a good outward show.

Apostasy is apostasy. How it is achieved is largely immaterial. It is like fussing over the reasons for why a serial killer did what he did, like it makes any difference if he did it for attention or for vengeance. Either way he brought suffering to society. Arguing over his path to that end changes nothing in the end, for we cannot change the past, only the present.

Many of us live far away from the temples that are the focus of our faith. In them we perform the work for our kindred dead that has been reserved since before the beginning of time for this generation and dispensation. We are the ones laying the groundwork for the labors of those who will live in the millennium. All of our priesthood covenants are centered in our temples. The only covenant made outside the temple is our first covenant, that of baptism. For all other saving ordinances we must travel to a temple. And for all ordinances of salvation for those who are dead, the temple is the only place those can be performed.

If we use our distance from the nearest temple as an excuse for being spiritually lazy or for adopting worldly practices, because it is so hard to get to a temple then we are little better than they of the kingdom of Israel anciently. They traded their salvation for convenience and permission to sin. If we are not strict with ourselves in our studying of the scriptures, attendance at our church meetings, and in worshipping in our homes with our family, or by our self if we are single, we will eventually begin to lose commitment to the strictness of the way God has laid out for our return home.

Like Lot, who eventually got sucked into Sodom because he associated with them on a daily basis, we will also lose our entire family and friends to the ways of the world. Abraham was wise to stay physically as far away from Sodom as he could. When we are not able to physically separate ourselves from the presence of the world, we can still work to protect our home from the world’s influences. This is done by being very careful about what we watch on our devices, what games we play, what we read, and what we listen to. By filling our minds with that which is good and uplifting we protect ourselves from the influences that promote the ways of the world.

There is no way to completely cut ourselves off from the influence of the world around us. That is just life. But we can focus our attention on the living prophet, his teachings, and counsel, and to studying every day to learn more about God’s words in the scriptures and the curriculum provided for us by the Lord’s leaders. We can choose our friends wisely, and keep only those friends who are wholesome. We are not being evil to let a friend go who tempts us to do things God forbids.

Apostasy is not an overnight condition. It begins gradually with an offense, lack of activity, a question that goes unanswered, doubts, or with a temptation to do or believe something that is actually against the commandments, whether we realize it or not. Apostasy is something that we must always be aware of, and careful of, for it can slip into our lives with great subtlety, and before you know it, whatever it is we have adopted is leading us away from the gospel of Christ. There is nothing wrong with being watchful and careful about what you believe and knowing why you believe it. Taking care of our spiritual self and making sure we are in line with God’s teachings is important and crucial to staying safe.