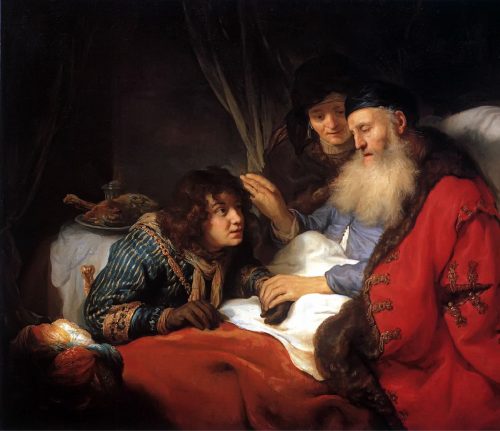 (Labeled for reuse on image.google.com)

This lesson is one of those subjects which, though basic to our theology, is fraught with emotional landmines. Even though the title is about eternal marriage, I would argue that our birthright is about far more than a wedding.

The subject of the birthright

Many of us know about birthrights from having been raised on European literature and government. The first born male of the king is usually the successor to the king. As the first born it was his right to inherit all that his father had, including all his titles and responsibilities.

Anciently things were a little different. In the days of the Patriarchs, like Abraham and Isaac, the rules of succession had not been so well defined as they were later on among the Jews. The first born could be entitled to a double portion of the estate, which meant he was required to care for all the widows and single women left behind when the father died. He could also be left wholly in charge of his father’s possessions, servants, titles, and responsibilities. And finally, he might have been left in charge of all his father’s spiritual duties, as in he became the family priest, as well as the patriarch over all family matters.

In this lesson we are reading about the passing of the parts of the birthright from the prophet Isaac to his son Jacob. But Jacob was not the firstborn son. Esau held that title, and the estate and the spiritual blessings to be handed down from Isaac were supposed to go to Esau.

What we don’t know is what happened between Isaac and his wife, Rebekah when she had a spiritual manifestation from the Lord that told her that two nations were striving within her, and that the younger son would rule over the elder son. Here is Genesis 25:21-26.

21 And Isaac entreated the Lord for his wife, because she was barren: and the Lord was entreated of him, and Rebekah his wife conceived.

22 And the children struggled together within her; and she said, If it be so, why am I thus? And she went to inquire of the Lord.

23 And the Lord said unto her, Two nations are in thy womb, and two manner of people shall be separated from thy bowels; and the one people shall be stronger than the other people; and the elder shall serve the younger.

24 ¶ And when her days to be delivered were fulfilled, behold, there were twins in her womb.

25 And the first came out red, all over like an hairy garment; and they called his name Esau.

26 And after that came his brother out, and his hand took hold on Esau’s heel; and his name was called Jacob: and Isaac was threescore years old when she bare them.

Note that the act of the younger brother grabbing the heel of his older brother is an ancient expression for deception. Hence his name Jacob, which means a supplanter (someone who takes away the place of another.)

We don’t know the family dynamics other than what the scriptures specifically state. Isaac loved Esau over Jacob because Esau was a hunter, and Isaac loved the meat that Esau made for him. Rebekah loved Joseph and wanted him to have the birthright according to the spiritual message she received.

Rights to the birthright

To receive all that your father has should require that you have at least a small amount of respect for the responsibilities that go with those titles and the accompanying power given to the holder of the birthright. But Esau showed nothing but disdain and contempt for his birthright, being willing to sell it to his brother with an oath when he was hungry. For his part of the bargain he received a bowl of red lentil soup.

When Isaac was old and going blind, he called in Esau and told him he would like to taste of his delicious venison one more time before he blessed him with his inheritance. Rebekah heard what he said to Esau and went straight in to Jacob and became confederate in planning to deceive Isaac into giving his spiritual blessing to Jacob. Jacob already had the physical birthright from his brother.

We can only guess that the reason the Lord gave Rebekah the answer that He did when she asked about her twins was so she would be ready to do what had to be done to get around her husband’s fondness for Esau, who was not worthy of the spiritual blessings of the Patriarchs.

She instructed Jacob in what he needed to do to fool his father into giving his priesthood blessing to Jacob, even accepting any curse that might come to Jacob for the deception upon herself. No pressure Jacob. Because Isaac was so blind, but not deaf, he could tell it was Jacob’s voice, but every other test he gave him Jacob passed because of his mother’s preparations. Isaac smelled his clothing, but he was wearing Esau’s clothing. Isaac touched his hand, and it was hairy like Esau’s, and the back of his neck, which also had animal skin on it. So Isaac was fooled, and gave the spiritual blessing to Jacob, just as the Lord said should happen.

One last note on this story

As part of the Abrahamic covenant the Lord told Abraham that he would curse them that cursed Abraham and bless them that blessed Abraham (Genesis 12:3). Isaac passed this blessing on to Jacob (Genesis 27:29). This made it rather difficult for him to revoke such a blessing, as he would have to curse Jacob to take it away. Once said, the blessing he gave to Jacob was as eternal as the blessing given to Abraham and to Isaac.

The blessings of Abraham, Isaac, and Jacob are the spiritual blessings, the birthright that Christ himself will share with all those who qualify for the Celestial kingdom. When he receives all that the Father has, he has promised that he will, in turn, share it with all those whom the Father has given him. So when we talk about the Abrahamic covenant we are talking about the fullness of the celestial glory, to receive all that the Father has to offer his Only Begotten Son.

We often think of the Abrahamic blessings in terms of only eternal marriage, but this is to ignore the rest of the rights due those who are faithful to their covenants. Remember when I said that the birthright had multiple parts to it? Nothing has changed in all these centuries. When we keep our covenants we receive the promise that all that God possesses will be given to us. That means thrones, principalities, dominions, powers, and so much more. Godhood itself is part of this inheritance.

Godhood can only happen to couples who have been married by the priesthood power given to man for that very purpose. It can only happen when the couple honors all their promises and covenants, and have spent their lives being honorable before the Lord, respecting His priesthood and learning to exercise righteousness in all that they do.

Whether we marry in the temple in this life or before the resurrection will make no difference in the end result of godhood. Anyone and everyone who is worthy of this blessing will be given the opportunity to have it granted. No one will be denied. So it doesn’t matter if our current spouse has not yet embraced the gospel of Christ, or if we don’t currently have a spouse, or if we do currently have a spouse we married in the temple. If we are personally worthy, and are seeking the blessings of exaltation, those blessings will be ours to claim before the day of resurrection.

Lessons to be learned

Esau was born with the right to receive the blessings of Abraham and Isaac, but Esau was flippant about what the Lord had offered him. He didn’t look ahead, exercise faith in the covenants of his fathers before him, and he was only concerned for today’s comforts, instead of tomorrow’s promised blessings. It is important to note that everything in the Abrahamic covenant is about tomorrow’s blessings. We don’t really get any of our birthright until after this life. This is a covenant we keep and live by faith in the future promises of the Lord. Treating our covenants with casual disregard will only land us in the same situation as Esau.

Abraham, Isaac, and Jacob are examples of those who lived by faith, believing that by being obedient today, by living the commandments and following God’s counsel today, the day would come that their glory would be beyond imagining, and beyond description. All the Lord could tell them was that their posterity would be as the stars of heaven and the sands of the sea. In other words, you will be rewarded with more family, more power, more of everything than you can possibly conceive.

Our birthright is to become gods, like our heavenly parents are. But our birthright will not be fully granted in this life. We must learn to walk by faith, trusting that the Lord will be faithful to all His promises to us. In living by faith we show our respect, and we honor our Father’s will by being obedient to his commandments. This is what makes us worthy to become children of Christ and worthy of the blessings of eternity in the hereafter.

Birthright Blessings; Marriage in the Covenant