Old Testament 04 – “Because of My Transgression My Eyes Are Opened”

Old Testament 04 – “Because of My Transgression My Eyes Are Opened” 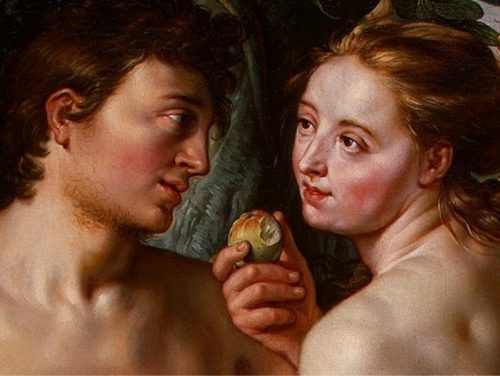 The Fall of mankind was the key to the need for an Atonement for mankind. We owe much to Adam and Eve for being willing to have their eyes opened in order for us to have the opportunity to become like God. This was both a brave and difficult decision for them to make. We honor Adam and Eve for being willing to take that step into the unknown that opened the door to our own salvation and exaltation.

What the Fall isn’t

Some people act like the Fall of man was a tragedy of monumental proportions. Nothing could be further from the truth. Some think it was a mistake made by Adam and Eve. Wrong again. And some believe Eve was silly, irresponsible, and easily duped by Satan’s arguments. Again, that is wrong. There are even those who believe sexual sin was the culprit that caused the Fall. Those who believe this do not understand that Adam and Eve were husband and wife, so sexual sin was out of the question.

What the Fall is

First and foremost, the Fall of mankind had to be a deliberate choice. The laws of moral agency demand that it be a choice made by those participating in the act. If it was not required, God could have made the earth in its current state and created Adam and Eve as mortal and skipped the whole garden of Eden bit.

But God couldn’t do that. He had to create them in an immortal state that was capable of his presence. They had to deliberately do something to remove themselves from God, to be cut off from His presence. It wouldn’t take much, because God cannot tolerate sin with the least degree of allowance, so any tiny misstep would do the trick.

The Lord commanded them to multiply and replenish the earth (have children). He also told them not to eat of the very fruit that would cause them to fall from His grace and make having children possible. He couldn’t hold them accountable for not replenishing (populating) the earth because they were innocent and didn’t know how. But He could hold them accountable for eating the fruit He commanded them to not even touch. All Satan had to do to get the human ball rolling was to get one or the other of them to take the first tiniest bite of the forbidden fruit.

The reason for eating the fruit didn’t matter. What mattered is that a law be transgressed, no matter how innocently. Adam was being stubborn about following the Lord’s commandments to the letter, so Satan turned to his wife. She was a little more open minded about what earth-life was supposed to be about, and she made the momentous decision to purposefully eat some of the fruit. Yes, she was tricked into it, but it was a conscious decision on Eve’s part. That is why she was held accountable for that action.

When she presented the fruit to Adam, she reasoned with him that in order to fulfill the first commandment they had been given to populate the earth, they would have to stay together. She knew she would be expelled from the garden, leaving Adam all alone. So Adam also made a deliberate choice, choosing to be with his wife, rather than be alone forever. Noble choice. True love.

In Moses 4:17-19 the Lord is interviewing Adam and Eve to get a report on what has just changed in the garden. Here is the interview:

17 And I, the Lord God, said unto Adam: Who told thee thou wast naked? Hast thou eaten of the tree whereof I commanded thee that thou shouldst not eat, if so thou shouldst surely die?

18 And the man said: The woman thou gavest me, and commandest that she should remain with me, she gave me of the fruit of the tree and I did eat.

19 And I, the Lord God, said unto the woman: What is this thing which thou hast done? And the woman said: The serpent beguiled me, and I did eat.

Note that it was only after her eyes were opened that she realized she had been tricked. She had no idea what game was afoot when she was deciding whether or not to eat the fruit.

The importance of the Fall

Getting Adam and Eve to eat the fruit was not just an exercise on the part of Satan in frustrating the Lord. We learn from the scriptures that Satan, for all his smarts, still cannot comprehend the mind of God. Satan honestly thought he was frustrating the Lord’s plans and damaging God himself. What he didn’t understand was that the Lord had built into the plan of salvation Satan’s efforts to derail the Lord’s plans in the garden. He used Satan’s efforts to thwart God to help Adam and Eve become mortal. Their mortality was the key to everything.

If Adam and Eve stayed immortal there would be no need for an atonement. They had to be cut off from the presence of God in order to need the sacrifice possible only through the Savior of mankind. Only He could pay the eternal price tag required to allow mercy to be offered to God’s children, which would allow them to stumble their way through repentance toward perfection and exaltation.

It is a fact that none of us is great enough to pay this price on our own. None of us are perfect enough to get through mortality unscathed and unmarred by sin. Only Christ could do that. But Adam and Even had to become mortal of their own choice first. They had to choose to be cut off from the presence of God, risking being lost forever from their Father in Heaven, and resting all their hopes for salvation in God’s chosen son.

Because they chose to become mortal, they were now able to know the difference between right and wrong, which meant they could sin outright anytime they wanted to. They were now held accountable for their behavior, which was different from the way things were in the garden when they were as innocent as a small child.

The Lord taught them the commandments they needed to follow in order to be obedient, and to be forgiven of their sins. They had to learn to walk through life exercising faith in Christ, and to learn to follow the promptings of the Holy Ghost. Now their obedience would bring forgiveness of sins. They would become justified, meaning they would be living in harmony with the laws of God, which would bring sanctification, which is forgiveness of sin, or holiness.

The Fall of man opened the door for the atonement of mankind through Christ. Without the Fall we would still be waiting for Adam and Eve to do something wrong so they could become mortal, so we would have an opportunity to come to earth and prove ourselves to our Father in Heaven. Without the Fall there could be no exaltation for any of God’s children. It is one of the key events in the whole plan of salvation as presented by our Father in Heaven.

Remember, if we sin in the presence of God He must punish us immediately. Because of the Fall and the subsequent atoning sacrifice of Christ, most of our sins go unpunished for quite some time, allowing us time to repent before full punishment must be exacted. This is part of the mercy Jesus offers us. He gives us time to repent so we don’t have to face the full penalty for the laws we ignore or break. The Fall made this mercy possible.

Because of My Transgression My Eyes Are Open