Old Testament 47 – Rise Up and Build

Old Testament 47 – Rise Up and Build 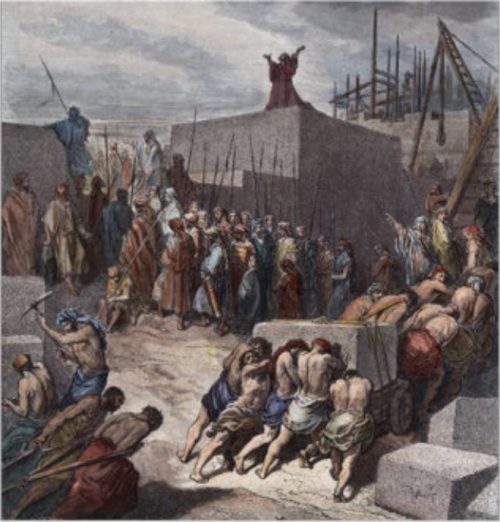 This lesson is an ancient example of a very modern problem. The Saints are trying to move the work of the Lord forward, and there are those who, for whatever reason, are trying to do their level best to stop, or at least frustrate that work. The essence of this lesson is found in the full title of the lesson, “Let Us Rise Up and Build.” Just as the Jews anciently decided to return to their homeland and rebuild the temple, in spite of all the opposition, so too do we need to rise to the challenges given to us by our prophet to build the Lord’s kingdom and hasten the work of the Lord in our day.

About 150 years before Cyrus was king over the Persian empire the Lord called him by name in a prophecy by Isaiah (Isaiah 45:1 – 5). He told Cyrus that He had given all the spoils of the earth to him and that it was Cyrus’s duty to let the people return to Jerusalem to build God’s temple. One hundred and fifty years later, when Cyrus finds out that Israel’s God had mentioned him by name and told him what he was to do, Cyrus felt very strongly the need to send the Jews back to Jerusalem to rebuild their temple.

This is a classic example of how the Lord uses those who are not even believers in Him to do the work to move the kingdom along. This is happening today on a regular basis as friends of the Church help the kingdom by doing things for us that we could not do for ourselves. These include people in politics, famous social influencers, scientists, etc. The Lord has people all over the world helping his work move forward, and they are not even aware of the role they are playing.

About 50,000 people returned to Jerusalem, got settled in, and after a year’s time they began to rebuild the temple. This was a difficult task. The city itself was destroyed, the walls of the city broken down in many places, and the countryside ravaged. Only a few people, mostly peasants, remained from Israel’s long exile in captivity.

When the Babylonians captured Jerusalem and destroyed the city, they took all the social elites back to Babylon with them. All that were left alive in the area were those at the bottom of the social scale. Those who lived north of Jerusalem married with their captors who had been sent from Babylon to colonize the area. These were the Samaritans. The Jews returning from captivity had kept to themselves and had not done much intermarrying with the Babylonians. They viewed the Samaritans as Jews who had defiled themselves by marrying their oppressors and by living outside the faith. Those in captivity also had the only Levites around, so the Samaritans had mimicked temple worship in their own way, but without the priesthood.

Cyrus had sent them back specifically to build the temple. Once they began the project, the people of Samaria came and wanted to help. They considered themselves Jews, and on top of that, Jews that had never left their homeland. When the returning Jews turned their noses up at them and basically kicked them to the curb, the Samaritans were insulted. From that point on they did everything in their power to stop the building of the temple. The temple work came to a grinding halt for the rest of King Cyrus’ reign. It wasn’t until the reign of King Darius that the work recommenced.

Ezra and Nehemiah Step In

During the reign of Darius Ezra received a revelation that they should begin the work on the temple again, even though the Jews had been commanded to stop all work. When their temple work was challenged all the way up to the king’s level, Darius discovered that Cyrus had commanded that the temple be built, so he wrote a new commandment that the Jews be allowed to work on the temple until it was completed.

Nehemiah was the cupbearer to King Artaxerxes. (And no, I don’t know what the relationship is between these three kings.) The king noticed that Nehemiah was sad and asked him why. Nehemiah told the king of the sad plight of the Jews, and how their city lay unprotected with no gate and no functioning walls to protect them. The king gave him money and resources to go and rebuild the walls and gate of the city. Again, the Samaritans tried everything in their power to stop the work, but with inspiration the Jews were able to accomplish the work of rebuilding the walls and putting up a new city gate.

The Jews faced many obstacles as they struggled against almost insurmountable odds to accomplish the rebuilding of the temple. At times the work was stopped for years before it could move forward. As we have been tasked by the Lord to hasten the work of salvation to all the world we will face many obstacles as well. There are those who do not want to see this work move forward. In October General Conference of 2014 we were told that there will be increased slandering of the prophet Joseph Smith. We have been told that every temple built outside of Utah has had at least one lawsuit brought against the Church.

As we all engage in more missionary work through social media, through speaking up about the Church in our daily lives, through the greater public awareness of the Church and it’s mission, the opposition grows. Satan, and those who have become disenfranchised from the Church, will not sit idly by while the kingdom rolls forth. They will do all in their power to pull down the members of the Church and to besmirch the name of the Latter-day Saints.

As we rise up and build the kingdom of God we must expect opposition. It would be naive of us not to expect it. The question is, how will we react to those who seek to defame us, hurt our good name, or who are willing to spread lies about us and what we believe in? Our covenants dictate that we will take upon us Christ’s name, bear one another’s burdens, and stand for Christ in whatsoever place we may be in. That means that we are under obligation to respond in all ways and at all times in Christ-like ways to those who would seek to do us harm.

The important point here is that this is the Lord’s work. He is able to do his own work. As we behave in gentle, kind and considerate ways to those who are being anything but those things, the Lord will surely, and absolutely continue to move his work forward. Our goal is not to do the moving forward ourselves, but to stand for Christ in all things and in all places as he moves the work forward. By being examples of Christ to those we come in contact with we invite the Spirit to touch lives and enlighten minds with the truth. This is our best weapon, and our best defense. The Spirit will do the work we cannot do for ourselves.