Old Testament 45 – If I Perish, I Perish

Old Testament 45 – If I Perish, I Perish 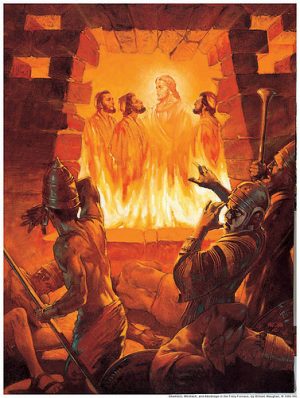 This lesson talks about six people who chose to live the standards the Lord had set for them. They each went through scary trials, but each of them chose to live according to their faith or perish in the attempt.

Admittedly, there are those who have died living their religion, but these six were all blessed physically to be saved because they lived their religion.

Each of the following five instances is another way in which people are put in a position of having to choose whether to do what the world demands and expects or do what the Lord commands. Let’s look briefly at each of their dilemmas.

Daniel, Shadrach, Meshach, and Abednego were all together when they were first carried into Babylon. Because of their intelligence and high birth they were selected to be trained in the culture and language of the King so they could serve him. The king commanded that they be given a special diet of Babylonian delicacies to help prepare them for their tasks, but this food violated the Lord’s law of health, and they refused to eat.

Trial 1 – The king’s steward was worried that if they did not eat as commanded that the king would kill him. Daniel offered him proof that eating simply, and in the Lord’s way would not harm them. He told the steward to feed them foods made with grains (pulse) for ten days. At the end of ten days, if they looked less healthy than the other young men, then they would submit. The steward agreed to the test and at the end of the ten days Daniel and his friends looked healthier than all the other young men, so they were allowed to eat as the Lord commanded.

Trial 2 – Daniel was separated from his companions, and was given a position of honor with the king. Those who served with Daniel were jealous because he seemed to have no vice, and they could find no fault with him. Daniel was so favored by the king that they were afraid he would become even more powerful. They decided to talk the king into a thirty day period where no petition or request could be made by anyone in the kingdom, unless it was directly to the king. If caught making any kind of petition to someone other than the king, they would be thrown into the lion’s den.

Daniel continued faithful in his prayers, was caught, and was thrown into the lion’s den. The point of Daniel and the lion’s den is not that he was saved by an angel who stopped the mouths of the lions so they wouldn’t hurt Daniel. The point is that even at the peril of his life, Daniel kept praying to God. His prayers were more important than mortal life to him. This begs the question of how important our prayers are to us. Would we be willing to die rather than stop kneeling and talking to God? It occurred to me that Daniel did not try to walk the fence on this issue. He could have sat quietly and meditated and prayed silently in an effort to please both God and the king. His integrity would not allow him to slight his God by such an accommodation for an earthly king. He was not ashamed to own his allegiance to his God.

Trial 3 – These three were commanded to bow, with the rest of the kingdom, and worship a golden image made by the king, or die. When they did not bow and worship the image, the king demanded that they do it. Their response was unyielding and showed complete loyalty to their God. In Daniel 3:16-18 they told the king that if God wanted to save them from the punishment the king threatened then fine, but if He chose not to save them from death then fine, they would die. Either way they would not worship the king’s idol. They were bold and firm in their decree.

The king was so furious that he commanded the furnace to be made seven times hotter than normal. It was so hot that the men who were ordered to throw them into the furnace all died from the heat. Yet the Lord used the faith of these three to teach the king a lesson. He sent an angel to save the three men. The king was so impressed with the courage and conviction of these three (well, and the appearance of an angel helped a little too), that he issued an edict throughout the land that no one was to speak against the God of Shadrach, Meshach, and Abednego. The penalty would be death.

The lesson here is that even under intense social pressure, and even threat of life, they were not willing to betray their God by even appearing to appease the king. If they were to die for their beliefs then they would die honestly and with dignity.

This story is full of twists and plotting, so much so that movies have been made about it. The basic message here is that Mordecai and Esther were wise, and they held their tongue until it was time to say something about their religion. If they had been loose lipped about telling everyone they were Jews they would have been in real trouble. But they never forsook the Lord’s teachings.

Trial 4 – Mordecai was hated by one of the king’s rulers because he would not bow down to him, so he talked the king into allowing him to set a date to slaughter all the Jews in the kingdom. This trial is mixed in and a part of Esther’s trial.

Trial 5 – Mordecai told Esther to approach the king and ask that the people be spared. It was the custom at that time that unless the king specifically called for you, it was an automatic death sentence to approach him. Only if he offered you to touch his scepter would you be spared. Esther was afraid, but Mordecai reminded her that God’s hand was in their lives and that who knew but what she had been put in this very position so she could save her people.

Esther had all the Jews fast with her to have the king’s heart softened, but she determined that if she perished, then she perished. Either way, she would die if she did not make the attempt. She willingly put her life on the line to intervene for her people. The long and the short of it is that her plea to the king was successful and her people were saved.

In each instance these six people were living among those who did not practice their religion, and did not share their beliefs. Each of them was put into a situation where they felt very alone and abandoned by hope, yet they put their faith and trust in God. Whether they lived or died was not the issue. The issue was that they were faithful and that they were determined to die being faithful to God. When we are facing immense social pressures to cave on our morals or relax our integrity, the world can look like a pretty dark and lonely place. But when we focus on the Lord, our love for Him and His love for us, then we can hold our head up and know that we are saved eternally, even if we are not saved from harm in mortality.