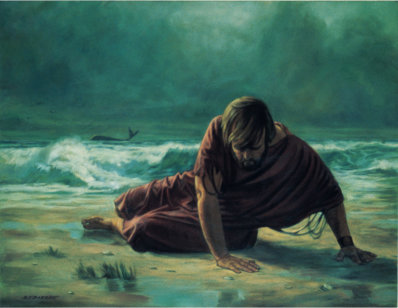 Servants of the Lord come in all flavors. Jonah was a reluctant and resentful one. The Lord told him to go to Nineveh and preach repentance. Jonah didn’t want to share the gospel message with them. He wanted them to be destroyed.

The capital of Assyria was the city of Nineveh. The Assyrians were a cruel people. The book of Nahum describes Nineveh as being full of whips, spears, chariots, witchcraft, whoredoms, and carcases, so many dead bodies that people tripped over them. Not a nice place. The Lord decided that enough was enough and told the prophet Jonah to go and prophesy to the people that if they did not repent they would be destroyed. Jonah hated the Assyrians, so he ran the opposite direction, to Tarshish.

On the voyage to Tarshish the Lord caused a great storm to arise that threatened to sink the boat. It was found out that Jonah was running from God, and he told the men that to stop the storm they would have to throw him into the sea. They tried to save him, but eventually had to throw him overboard. The Lord had prepared a great fish to swallow Jonah for three days and nights. In the belly of the fish Jonah had time to think about his actions. When he was ready to worship the Lord again, the fish spit him out onto the land.

Jonah went to Nineveh, preached to the people of their destruction, but was surprised, and angry, when the whole city repented and the city was saved from destruction. Jonah was so angry he told the Lord to just kill him already and be done with it. The Lord refused, so Jonah went and built a small shelter to sit and wait to see what would happen to the city. The heat was so intense that the Lord caused a vine and gourd to grow up out of the ground to give him shade all in one day. The next day the Lord sent a worm to destroy the gourd. Again, Jonah wanted to die because he was angry over the loss of the gourd. The Lord made the point to him that he was getting all upset over a gourd that grew one day and died the next when there were 120,000 people in the city of Nineveh whose lives were just spared because they repented. Why wasn’t he upset that all of them were almost destroyed? The people of Nineveh were spiritually lost, morally not knowing their right hand from their left.

It is interesting to compare the Assyrians with Israel. The people of Nineveh were completely without any moral compass. When the Lord sent the prophet to them they listened and repented. Israel, on the other hand, had known all about God for many generations. They knew His commandments, expectations, of His protection and His punishments for forsaking Him, yet they turned away from Him and worshiped idols anyway. Israel rebelled with their eyes wide open.

1.  Jonah tried to run from the Lord. How often have we tried to run from the Lord? We tell ourselves that no one can see what we are doing. We convince ourselves that we are really alone and in private so we can do what we want and no one will be the wiser for it. But the Lord always sees what we do. Sometimes we tell ourselves that we will disappear so the Bishop or a ministering brother or sister cannot find us. We become inactive in the Church, thinking we will be left alone to do as we please if no one sees us at Church. Some enterprising people join the military or take a job in a far off city, thinking they can hide from the Lord’s Church so they can do what they want. It never really works. We always get found eventually.

2.  The Lord did not let Jonah off easily. I would say three days and nights in the belly of a fish would be pretty awful from most any point of view. And it probably seemed like an eternity to Jonah. But the Lord left him there until Jonah was ready to play nice and fulfill his calling as prophet. The Lord is always willing and anxious for us to return to Him, but sometimes the price we have to pay for our disobedience must be paid first, and sometimes it is uncomfortable or steep. But if we are going to experience a true change of heart, sometimes the process of change is painful, and might even take a while.

3.  Even once Jonah’s lesson was “learned” he was begrudging in his obedience. He really did not want to see those awful Assyrians have any taste of the Lord’s company except for His wrath. He must have really preached them a sermon of destruction once he got to Nineveh, because the people believed what he said and repented completely. The whole city dressed in sackcloth and ashes to show their humility before the Lord. Perhaps it was this very quality that the Lord saw in Jonah, and needed in order to save the people of Nineveh. The Lord needed the people to believe He really was going to destroy the city. Jonah, on the other hand, resented his own success, and the Lord had to use the gourd to try to give him a better perspective on what was truly important (the lives of the people, vs. the life of the gourd).

4.  To what lengths will the Lord go to save us? We believe the Lord loves us so He will do wonderful things to protect us because we are obedient. But what about the wicked? This is a good example of how far the Lord is willing to go to deliver His message of salvation to those who do not yet know about it. It shows us that God takes no delight in destroying His children. He truly wants all of us to hear the message of salvation and repent. This is a source of joy for Him. Do we take the same level of joy in being missionaries in our own right?

If this lesson teaches us any one lasting lesson, part of that lesson should include an awareness that the Lord takes sharing the gospel message as seriously as anything we can imagine. When we are baptized and make covenants with the Lord to stand as witnesses of Him at all times, in all places, and in whatever circumstances we may be in, those are not empty words to the Lord. He is counting on us to fulfill that promise. These other people we come into contact with are every bit as much His children as we are. He loves them and will hold us accountable for whether or not we do anything to teach them of His ways or show them of His mercy and kindness.