Old Testament 30 – The House of the Lord

Old Testament 30 – The House of the Lord 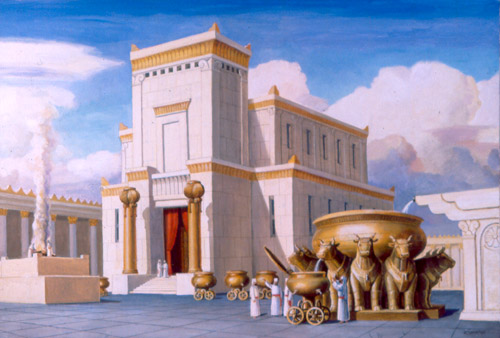 King Hezekiah followed on the heels of Ahab, who was the most wicked king Israel had ever had. Ahab had desecrated the temple, the House of the Lord, then shut the doors. One of Hezekiah’s first acts as king was to open the temple, clean it out, purify it, and rededicate it for worshiping. That meant that the priests also had to go through a cleansing process in order to be able to perform the sacrifices. There was a general spirit of cleansing going on all through the area as Hezekiah worked to bring Israel back to worshiping the Lord.

Those who had eyes to see and ears to hear understood that whenever Israel worshipped Jehovah they were protected from outside threats. It was only when they abandoned Him that they were left naked and vulnerable before their enemies, which were in plentiful supply. Hezekiah is a case in point. Once he rededicated the temple, cleansed the priests, and had the people worshiping the Lord again, the hosts of Assyria laid siege to Jerusalem.

The king of the Assyrians was Sennacherib, who had gone undefeated for decades in his conquests. He spoke abusively about Israel and their god. King Hezekiah took all precautions to protect his people then he and Isaiah prayed to the Lord for help. The Lord sent an angel into the camps of King Sennacherib and killed all his mighty men of valor, his leaders, and his chief captains in one night. The King retreated in shame, went home, and was murdered by his own family upon arrival.

Part of King Hezekiah’s preparations to defend his people was to cap wells around the country side and to divert the main water source outside the city (the spring of Gihon) into the city by way of a tunnel called (cleverly enough) Hezekiah’s Tunnel. Without these changes Jerusalem would never have been able to hold out until the siege ended. They would have died of thirst.

There are many things that can be discussed from the life of Hezekiah, but I will briefly touch on only four of them. First, here are some verses from 2 Chronicles 29:6 – 9.

For our fathers have trespassed, and done that which was evil in the eyes of the Lord our God, and have forsaken him, and have turned away their faces from the habitation of the Lord, and turned their backs. Also they have shut up the doors of the porch, and put out the lamps, and have not burned incense nor offered burnt offerings in the holy place unto the God of Israel. Wherefore the wrath of the Lord was upon Judah and Jerusalem, and he hath delivered them to trouble, to astonishment, and to hissing, as ye see with your eyes. For, lo, our fathers have fallen by the sword, and our sons and our daughters and our wives are in captivity for this.

When we turn our faces from the habitation of the Lord, when we turn our backs on the temple, we abandon all that such a place stands for. To reject the covenants of righteousness found in the temple is to embrace the teachings and philosophies of the world. This leaves us exposed to the sins of the world and the punishments that go with them.

As the verses say, such behavior brings “the wrath of the Lord” and brings shame on those who profess to be His people. Hezekiah points out to the people that the evidence of this should be obvious to them, because “our fathers have fallen by the sword, and our sons and our daughters and our wives are in captivity for this.” This is a very pointed lesson.

The main goal urged on every new member of the Church is to prepare themselves for the blessings of temple worship. But what of those of us who are already members? Some of us have been to the temple, but, for whatever reason have stopped attending. We can always find excuses: it is too expensive to get there, my work schedule interferes, I just haven’t seen my bishop to talk to him about it. There are a million reasons for not going, but all of them amount to the same thing, turning our backs on the worship that goes on in the temple. We are allowing excuses to keep us away from the place we need to frequent more than any other place on earth outside of our own home.

Lesson 2 – Turning to the Temple

To turn to something or someone is to use that thing or person as a resource when you are in need. A child gets hurt and turns to Mom or Dad. A spouse should turn to their companion. Anyone who has gone to the temple in the past should be using the temple as the place they turn to in times of need and for regular spiritual refills.

Temple worship is not just for those who are dead. By attending the temple we feel the Lord’s Spirit and receive inspiration and answers to our prayers. We are strengthened by our temple worship. That is part of the reason the Lord gave us the temple to go to, as a place for us to commune with His Spirit and gain strength, receive guidance, and feel His peace in our souls.

The water Hezekiah diverted into the city became far more symbolic than just the water source that saved their lives. The water from Hezekiah’s tunnel became known as living water, the same kind that Christ talks about. Living water is truth, which is comprised of the doctrines and teachings of Christ’s gospel. We need a steady flow of this truth in our lives or we spiritually shrivel up and die. Just as Hezekiah brought this life-giving water into the center of the city to keep them alive, so we need to drink deeply from the scriptures and manuals, prayer and study in order to stay spiritually strong. This is how the Lord sustains us, with His living water.

Lesson 4 – The Temple as a Protection

If you are not familiar with the term nexus, the temple is a nexus. A nexus is a place that connects or links things together. In the temple we, as mortals, do work for those in the spirit world. Temples are places where the veil between the two worlds is thinnest. Temples are places of great spiritual power. Next to our homes, there is no more sacred place on earth than the temple.

Why do you think the prophets and apostles keep telling us to go to the temple? Why do you think they put such great emphasis on temple attendance? There is power in the temple, and there is power to be felt and had in temple attendance. Just as Israel was protected from the armies of the Assyrians because they prepared themselves physically and spiritually by building walls, preparing their armies, and worshiping at the temple, so the Lord will protect us when we have done all that the prophets have told us we need to do, coupled with worthy temple attendance.

There are many other good things to be learned in this lesson. Think about how important it is that we, as a people, do not trifle with or treat lightly, sacred things. Studying your scriptures will help you learn the importance of being worthy to enter the temple. But nothing can take the place of actually attending and participating in the worship that takes place in the House of the Lord.