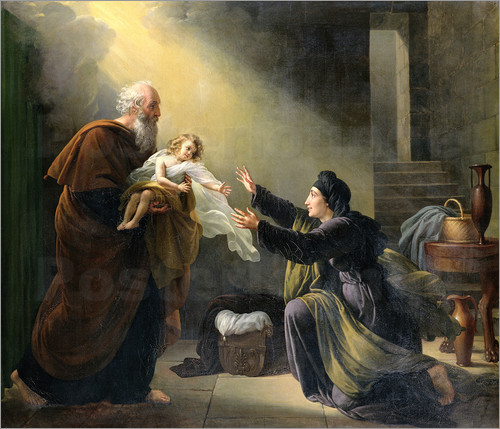 There are a number of directions this lesson could go (1 Kings 17-19). I would like to look at it from the standpoint of how important sacrifice is for us to be able to put God first in our lives. There are several examples of sacrifices made in the course of these three chapters, by both Elijah and the widow of Zarephath. The sacrifices made by these two faithful saints is what enabled them to follow the still small voice when they heard it. That is assuming that the widow of Zarephath also followed the promptings of the Spirit, which we have no reason to doubt that she did.

Wicked King Ahab and his wicked wife Jezebel had led all Israel astray with their sinful ways. No one up to Ahab’s reign had done so much to destroy Israel’s spirituality as Ahab. He was the king of bad examples. Elijah was sent to tell him the Lord was going to curse Israel with a famine. No rain was to fall and no dew would be seen for the next three years. Once Elijah had sealed the heavens the Lord told him to go hide from Ahab by a stream. This is where the Lord commanded the ravens to bring him food morning and night. Eventually the stream dried up from the drought, so the Lord told him to go find the widow of Zarephath and stay with her until the famine ended.

The widow was about to eat her last meal with her son before they starved to death when Elijah showed up and asked her for water from the well and for bread. She ran and got him the water, but told him they only had enough meal and oil to make one last dinner before they starved. He told her to feed him first then go and make enough for herself and her son, which she did. Elijah lived with her for a time. At one point the widow’s son became very sick and died. Elijah brought him back to life.

At the end of the three years the Lord told Elijah to go to Ahab and command him to gather all his priests of Baal to offer sacrifice to end the drought. All of Israel was summoned for the spectacle. 850 priests were given a bullock to offer to Baal to send rain. They called on him all day, leaping onto the altar and cutting themselves until the blood gushed out of their bodies. Elijah just made fun of them. When it was Elijah’s turn he dug a trench around the offering and and had men fill four barrels of water and pour it all over the offering. This was repeated two more times until the trench was filled with water and the offering and wood were soaked. Elijah called upon the Lord to show His power to the people of Israel so they could tell the difference between Him and the god of Ahab, Baalim. The Lord sent fire from heaven that licked up all the water in the trench and completely consumed the offering and all the wet wood under it.

Elijah then took all the priests of Baal to the river and killed every last one of them. When Jezebel found out what he had done to her priests she threatened to have him killed that very night, so Elijah fled into the wilderness. In desperation he gave up and asked the Lord to take his life, for he believed he was the only faithful one left in Israel. While he slept, an angel came and touched him to wake him up and told him to eat, for his journey would be long. He came a second time with the same command.

Elijah went fasting 40 days to Mt. Horeb. At the top of the mountain the Lord spoke to Elijah and told him that there were still seven thousand faithful people in Israel. He also instructed him to go and call Elisha to the ministry.

As you read about Elijah you may recognize that he seems a lot like Nephi, the son of Helaman. Look at Helaman 10:4-5. The key to the Lord’s blessing Nephi with the sealing power was Nephi’s “unwearyingness” in pushing ahead to do the Lord’s will, no matter what was required. This is what is required to earn the Lord’s trust-that no matter what He asks, we will do it. We have to work until His will has been done, no matter what our personal inconveniences are. This is one of Elijah’s defining characteristics. He never complained about his own comforts or discomforts. His whole focus was on doing the Lord’s will faithfully. So when the Lord said go hide at this stream and I’ll have birds feed you, he did it without complaint. When the stream dried up, he waited patiently on the Lord to give him further instructions.

The widow of Zarephath’s willingness to obey at all costs is worth looking at. She and her son were on the brink of starvation when the prophet asked her to bring him water. Easy enough. Done. But then he asked for the impossible. He told her to use her last remaining meal and oil to make bread for him first, before she made any for herself and her son. She knew full well she only had enough left for she and her son for one more meal and then they would starve to death. Yet she did as the prophet commanded, and served the Lord’s anointed servant first. It was then that she received the promise that her oil and meal would not run out until the Lord sent rain again upon the earth. The Lord literally required everything she had left to offer, which admittedly, wasn’t much, but it was everything she had, with no view of replenishment, before she was given the promise of being saved for her faithfulness.

There are more sacrifices and many more wonderful lessons to be learned in this lesson, but the principle of sacrifice is important for us to learn. How much we have to sacrifice is of no importance. What is important is that no matter how much is asked for, it will be everything we have to give. We will all be placed, at some point in our lives, into a position where we see no way out, no way around our circumstances. The Lord will demand that we surrender to Him something that to us will seem like life itself. The test is whether we are willing to do it. The test will be different for each person. The circumstances will differ from person to person, but the principle never changes.

The widow was asked to “sacrifice” the prolonged life of her and her son so the Lord’s servant could have an immediate meal. This almost sounds ridiculously selfish on the part of the prophet. But the Lord knew what He had in store for her and her son if she passed the test. In reality, her sacrifice that seemed like literally life itself, was a bargain payment for what He gave her in return. Not only did she survive the drought, but she got to house the prophet of the Lord, who brought her son back to life when he became sick and died. Was that worth giving up what she thought was her last meal for a stranger? You bet!

I have faced this widow’s test in my own life. The circumstances were vastly different, but to me it was as though I was giving up my only tie to life. It was hard, but I followed the counsel of my rank and file Church leaders, who I thought were dead wrong in what they were doing. But the Brethren had just stated in General Conference that we need to follow our Church leaders, even when we think they are wrong, so I did. I ended up homeless for several months, moving from place to place with my four children, wondering if I would ever recover from the blow I had received. It wasn’t until I was literally one night away from having to move my children into our car to live that I went to the Lord and pled with Him, for I felt I had reached my limit and didn’t know how I could live with what was coming next. Within 24 hours I not only had employment, but a place to live. Neither of these blessings were foreseen by me the day before, but the Lord knew that if I could just hang on a few more hours that joy would come in the morning, literally. I, like the widow, had stepped out into the void and had followed the counsel of the Lord’s prophet. The Lord took care of the rest.

No one in this life is immune from the sacrifices that will define our obedience to the Lord. We all have to face them and suffer them. But it is in making the sacrifices that we find that what we thought was a great burden for us, in reality, was but the precursor to a greater blessing. It is true that sacrifices bring forth the blessings of heaven.