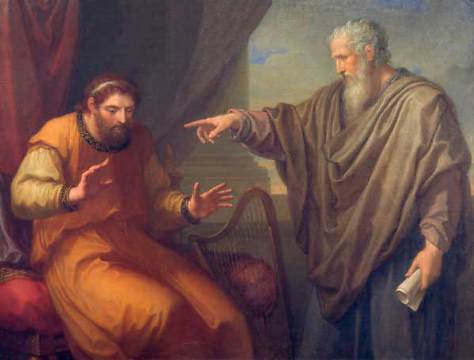 Purpose of the Lesson: To encourage class members to be chaste in thought and action and to repent of their sins.

There are many points that can be made in this lesson, but having a clean heart is the answer to all the problems talked about in these chapters of 2 Samuel and Psalms 51. This lesson is about David’s rise to power, and his fall from grace by committing adultery. I would like to focus on two thoughts in this discussion, the sin of ingratitude, and forgiveness of sin.

David was highly favored of the Lord. Everything David put his hand to the Lord blessed and prospered. David worked hard for the blessings he received, but he deserved every one of them. The Lord blessed David with the crown, the kingdom, many wives and concubines, children, and wealth. In fact, it even says that everything David did pleased the whole country of Israel immensely. You don’t get much more highly favored than this.

One night, at the height of his popularity, fame, and power, David, from his rooftop, saw Bath-Sheba bathing. He allowed himself to develop lust, an obsession for her. He sent for her, laid with her, and got her pregnant. He knew ahead of time that she was a married woman. One might wonder how someone as conscientious of the law, and who always sought to please God could deliberately take another man’s wife and purposefully commit sin. It is notable here that Bath-Sheba means Daughter of the covenant, and Uriah’s name (her husband) means Jehovah is my light.

If you have ever committed a notable sin, you understand that all these obvious things don’t matter. When we become obsessed with something that leads us into sin, all we see is the gratification or the justification that is leading us. All other concerns, no matter how plain and obvious, seem to melt into the background. At that point, the desire takes over and all other concerns are temporarily forgotten. We only know what we want, and what we are willing to do to get it.

So the king and judge of all Israel took another man’s wife and got her pregnant. When he found out she was with child his thoughts focused on how he could cover up his sin and prevent it from becoming public. He brought in Uriah from the battlefield, wined and dined him, and hoped that he would use this opportunity to be at home to spend time with his wife. That was the expectation. Then no one but David and Bath-Sheba would know that the child was not Uriah’s. But as is so often the case, their plot to cover their sin was spoiled because Uriah was an honorable man. He could not bring himself to enjoy the comforts of home when all his fellow soldiers went without, so he slept with the soldiers and did not go home.

Digging himself even further into the pit he had created for himself, David decided to let “nature” take its course. People die in battle all the time. He would just make sure Uriah was “accidentally” killed in battle. Problem solved. Public shame and humiliation avoided. Sin successfully hidden. Think about your sins. Does this sound familiar? Does it ever get hidden so “easily?” Uriah was successfully disposed of by putting him into the line of fire. What is interesting is that it wasn’t just Uriah who had to die for this coverup. They had to take many men right up to the city walls so that many people died, Uriah among them, so it wouldn’t look like they targeted just one man. David was guilty of the death of more than just Uriah.

The Sin of Ingratitude

Where was the Lord while all this was going on? Where was Nathan the prophet? When we commit sin where is the Lord? He is watching us make our choices. By His own rules He lets us make our choices then helps us live with the consequences. It was only after the worst of the damage was done that the Lord sent in Nathan, the prophet to pass sentence on David. David, no doubt, thought he had successfully covered up his sin.

Nathan approached David with a problem. David did not realize this was only a parable of his own sin. Nathan told David of a man who had almost nothing, but the one lamb that he had was his most precious possession. A wealthy man, who had everything, and lacked for nothing took that poor man’s lamb to feed his own guest, because he was too stingy and selfish to kill his own animal. David was enraged at this story and declared that the wealthy man should have to pay for the lamb four times over for his selfishness, and that because of his lack of pity for the poor man he should die. He even swore it with an oath, which was unbreakable.

It was then that Nathan revealed to David the meaning of the story in 2 Samuel 12:7 – 9.

7 And Nathan said to David, Thou art the man. Thus saith the Lord God of Israel, I anointed thee king over Israel, and I delivered thee out of the hand of Saul;

8 And I gave thee thy master’s house, and thy master’s wives into thy bosom, and gave thee the house of Israel and of Judah; and if that had been too little, I would moreover have given unto thee such and such things.

9 Wherefore hast thou despised the commandment of the Lord, to do evil in his sight? thou hast killed Uriah the Hittite with the sword, and hast taken his wife to be thy wife, and hast slain him with the sword of the children of Ammon.

The Lord was saying to David, ‘I gave you everything! I anointed you king, I saved your life, I gave you wives, possessions, everything! Yet apparently that was not enough. You had to have what did not belong to you. You took another man’s only possession, then killed him for it.’

Sin looks different on the other end of the sin, doesn’t it? Now that the Lord has spelled out the sin in light of truth and reality, David looks very petty, selfish, and cruel. I am sure it did not feel that way when he was obsessing over having sex with Bath-Sheba.

I find it interesting that the Lord did not chide David for adultery per se. He did, however, rail on him for being ungrateful and despising the blessings he had been given. Doctrine and Covenants 59:21 says,

21 And in nothing doth man offend God, or against none is his wrath kindled, save those who confess not his hand in all things, and obey not his commandments.

33 For what doth it profit a man if a gift is bestowed upon him, and he receive not the gift? Behold, he rejoices not in that which is given unto him, neither rejoices in him who is the giver of the gift.

Can you see any connections between these two verses in the Doctrine and Covenants and what happened to David? What about us? Sure, we don’t have kingdoms and multiple spouses, etc. But the Lord has blessed us with the gift of the Holy Ghost, which means we can receive personal revelation. We have all the temple covenants and eternal marriage. I would venture to say that we have been blessed far in excess of what David ever had.

What do we do with our blessings? Are we properly grateful for them? Do we show that gratitude by studying God’s word and saying our prayers, having Family Home Evening, attending Church, and paying our tithes and offerings? Are we living up to the privileges we have been granted?

It is human nature to get distracted. I know from personal experience that when I allow myself to focus on that which is unworthy of my privileges, I forget just how privileged I am, and all I can see is the desired sin before me. But once the sin has been indulged, and clarity has been restored, we find ourselves in great need of repentance. I strongly encourage you to read Psalms 51, which is all about repentance. I was going to address that as well, but it would more than double the length of this article, so I will turn you loose to explore that on your own.

Just remember that David was not Temple endowed, many of us are. Just being members of the Lord’s Church entitles us to levels of blessings that most people of David’s era could not even imagine. In all that the Lord has given us as a Church, ask yourself this, “What am I doing to keep myself worthy and focused so I am properly grateful for my blessings, and am I ready to recognize God’s blessings in my life each moment of every day?”

What are some things you do to help you stay focused on your blessings?