Old Testament 21 – Those Who Honor Him

Old Testament 21 – Those Who Honor Him 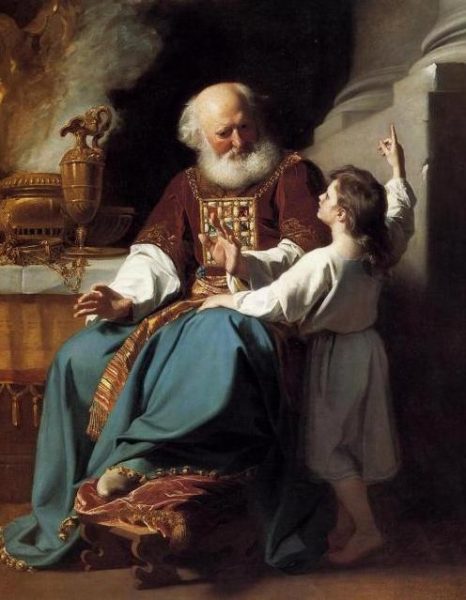 This lesson is all about coming to learn and appreciate our position before the Lord. The key question here is whom do we honor, the Lord, others, or ourselves?

In these chapters of 1 Samuel we read about Eli, the temple priest, Hophni and Phinehas, his sons, and Samuel the Nazarite, the consecrated boy, dedicated to God’s service by his mother, Hannah. Between the priest, his sons, and Samuel, we have three good examples of how to be and how not to be, what to do and what not to do.

12 Now the sons of Eli were sons of Belial; they knew not the Lord.

The word Belial refers to the “spirit of evil personified.” In Hebrew it means someone who is without worth. Think about how these sons have been described in the same sentence where they are said to know not the Lord.

The meat given to the priests was boiled according to the Law of Moses. Hophni and Phinehas wanted it raw so they could eat it as it pleased them. They told the people offering the sacrifices to give them the raw meat. When the people wanted to at least perform the first part of the sacrifice correctly, the brothers threatened to take it by force if they did not comply. They were, in effect, stealing from the Lord.

17 Wherefore the sin of the young men was very great before the Lord: for men abhorred the offering of the Lord.

They offended God and terrorized the people to the point that people did not want to come and offer sacrifice any more, but their sin did not end there. As the people came to the door of the tabernacle of the congregation the brothers would seduce women who had come to worship with their families.

It is important to note that Hophni and Phinehas were not young and foolish. When their father died he was 98 years old. They had been this way for many years. They could have easily been in their 60s or older when they died.

When Eli was made aware of the sins of his sons he called them in and rehearsed their sins to them and told them to stop, for they were offending God and the people. He even pointed out to them that if a man sins against another man someone can entreat for him, but if a man sins against God, who will entreat for him then? His fatherly talk made no difference in the behavior of his sons, and Eli did nothing more about it.

At one point Eli was sent a messenger from the Lord to tell him that his wickedness had not gone unnoticed by God, and that his family was going to be punished for their sins.

29 Wherefore kick ye at my sacrifice and at mine offering, which I have commanded in my habitation; and honourest thy sons above me, to make yourselves fat with the chiefest of all the offerings of Israel my people?

From the reading of 1 Samuel 2: 29 above, it sounds like the father was also eating of the offerings his sons stole. The messenger accused Eli and his sons with the words, “… make yourselves fat with the chiefest of all the offerings …” Eli was a very heavy man, as we find out when we read how he dies. The Lord curses Eli’s family with the promise that not only will both of his sons die in the same day, but that none of his family will ever live to an old age, as long as the earth should stand. This was the testimony against Eli’s family for their offense to the Lord in the exercise of their priesthood duties.

Eli continued in his priestly office, even promising Hannah during one of her yearly visits to her son Samuel, that God would give her more children, which He did – three boys and two girls.

There had not been a prophet among the Israelites for many, many years. Samuel did not know what the voice of the Lord sounded like, but he was faithful in all his duties in the temple, and was obedient to those who taught him the ways of the Lord.

Eli was the priest of the Lord’s temple, but the Lord had chosen Samuel to be His prophet. The first thing he did was to tell Samuel what He was going to do to His own priest. Samuel had to be intimidated into telling Eli the contents of the vision. One of the most important verses that describes the integrity and heart of Samuel, the prophet is 1 Samuel 3:19.

19 And Samuel grew, and the Lord was with him, and did let none of his words fall to the ground.

I love the that last phrase, “and did let none of his words fall to the ground.” Think in practical terms. If you are carrying something precious, even though your arms are full, you wouldn’t dare let any of what you are carrying fall into the dirt. Samuel treated the Lord’s words just this way, they were precious, too precious to be idly allowed to be disregarded or let slip away. It is a beautiful description of Samuel’s heart.

Hophni and Phinehas were self absorbed brutes, who had no respect for God, His kingdom, the priesthood they held, or for other people. They were all about themselves and what pleasures they could afford themselves at other’s expense. This may sound like someone you have met before, but hopefully it does not describe you. For their great offense the Lord said that their sins could not be washed away by any amount of sacrifices forever. 1 Samuel 3:14

14 And therefore I have sworn unto the house of Eli, that the iniquity of Eli’s house shall not be purged with sacrifice nor offering for ever.

Eli’s example may not be as obvious as his son’s examples. If you have lived a long time you may have seen someone who has a position of responsibility in the kingdom who has allowed evil into his life, and has not done what is required to purge it. He still performs his office in the priesthood, and even blesses the lives of others because of the respect the Lord has for the office he holds. But those who honor the lusts of the flesh, who fear man more than God, eventually incur the wrath of the Lord because they always betray Him in the end.

Finally, we have the faithful Samuel. Even the weak-willed Eli recognized the voice of God when he sensed it. Eli wasn’t totally spiritually dead. Samuel, unlike his other priesthood-holding brethren cherished anything having to do with the service of the Lord. He cherished God’s words and honored him in all his service. That is why he was called to be the prophet in Israel.

As you teach or study this lesson think about where your own heart lies. Are you a Hophni and Phinehas, an Eli, or closer to a Samuel. I think we would all like to say we are a Samuel, but I think that in too many parts of our lives we carry the taint of Eli or his sons. Read the verses in the lesson and think about the blessings and the cursings that accompany the decisions we make about whom we choose to honor. Our only safe course, our only path to lasting happiness, is to honor the Lord first and foremost in all that we do and in all that we feel.

Those Who Honor Him