(The following article was written while I lived in Hawaii.)

I play the organ at the temple once a week. When someone else who plays cannot make it, I sometimes get a call to substitute for them. Recently I got a call to play for a friend. The peace of the temple was palpable, which is why I like being in the temple. I played for the 7 p.m. and 8 p.m. sessions then headed home. As I walked down the lighted walkway to my car I was humming the hymns I had just spent two hours playing. A warm breeze was blowing. I could hear the surf a half mile away from the temple, and the stars were shining. Peace was everywhere.

I had been reading some chapters in 1 Nephi in between playing for the two sessions, and was thinking of the faith of Nephi to go back to Jerusalem and face seemingly impossible odds while in the company of two brothers who increasingly would prefer he stop breathing once and for all. It made me think about how I would face such circumstances, and whether I would have that kind of simple, factual faith to march into the unknown with such confidence in my God.

I remembered reading something earlier in the day about how the Lord prayed to the Father not that God would deliver the Savior’s disciples from the world, but from the evil of the world. This caused even more reflection of my own life and my own commitment to living by the Spirit instead of all the times I tend to live without it. 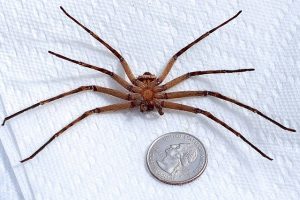 I arrived at my little car and tossed in my temple bag, took off my tie (I’m always very anxious to get the tie off), and backed out of the stall and headed down the long driveway toward the street. I got maybe half a block down the temple property when a large cane spider rapidly ran up my windshield right in front of my face, and disappeared above me.

My heart nearly stopped. Everything inside of me shut down. I am more afraid of spiders than most anything in the world, especially the big ones. I couldn’t tell if the spider was outside or inside the car because it was so dark outside. If it was inside the car then it was hiding in the visor just inches above my face. I didn’t dare pull down the visor while I was driving for fear it would jump or fall on me while I was driving. That would be a recipe for disaster. I slammed on the brakes and threw the car into Park. My heart just pounded. What should I do? If I got out of the car and pulled down the visor and the spider dropped onto my seat I wouldn’t be able to drive home with that thing loose in my car. If it was on the outside of the car getting out of the car might cause it to drop on me as I exited the car. I sat there frozen with fear.

I determined that as long as I couldn’t see it, I was still safe, even if only temporarily. It was a six minute ride home traveling the speed limit. I made it home in about four minutes, ashamed of my violation of the speed limit, but so glad I didn’t die from running into a pole or someone else because a spider attacked me in the car.

As I sat down, grateful my life had been spared from the big, bad, nasty harbinger of death, I realized how quickly my peace had been shattered that evening. I was so serene contemplating Nephi’s faith in very hard circumstances, yet all the Lord had to do was, literally, flash a glance at a spider to me and I crumbled into a pile of trembling goo. Where was my faith in the Lord’s protection while I was doing His work? Where was my long vision that I had things of import to do and the Lord would watch over me while I was going about fulfilling my calling? It all went out the window when I saw a spider.

I gained a better appreciation for the spiritual blindness of Laman and Lemuel. They had no long-term spiritual foresight. They only saw the here and now, and the here and now frightened them. Everything they had come to depend on in life, their wealth, and their social prestige had just been stripped from them overnight. They reacted with violence because they saw no bright future, only imminent disaster. Leaving everything behind, including their futures, was their spider. It was more than a little humbling to see that in this regard I was acting far more like Laman and Lemuel than I was like Nephi.