New Testament 46 – They Shall Be His People

New Testament 46 – They Shall Be His People 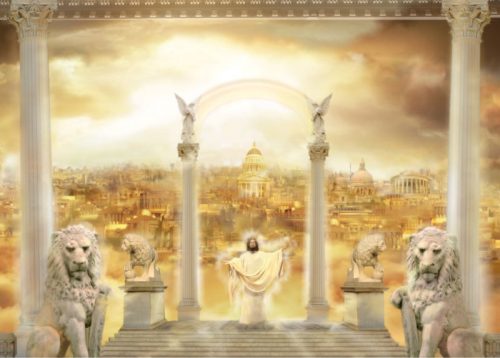 We have always been told that if we are prepared we shall not fear. There are plenty of scary things prophesied for the last days. If we prepare ourselves both physically and spiritually for what we are told is coming then the day will come when He will come and dwell with us and we will be His people. At least we know that evil does not win this war. But knowing that evil loses doesn’t guarantee our personal success. We still have a lot of work to do to make sure we are on the winning side when the end arrives.

One of the points the lesson strongly emphasizes is that the war we fought in heaven over our agency still continues to this day. Satan, as an obstacle to our having the right mortal experience, was removed from heaven. But he was also sent to earth where he continues to war against our Father by trying to prevent us from succeeding in our efforts to return to Him.

In Revelation 6 the verses talk about the many things Satan has used to ruin our experience here. He has used war, famine, pestilence, murder, and any other unholy thing or practice he could devise to distract God’s children or win them into his service. President Gordon B. Hinckley said,

“That war, so bitter, so intense, has gone on, and it has never ceased. It is the war between truth and error, between agency and compulsion, between the followers of Christ and those who have denied Him. His enemies have used every stratagem in that conflict. They’ve indulged in lying and deceit. They’ve employed money and wealth. They’ve tricked the minds of men. They’ve murdered and destroyed and engaged in every other unholy and impure practice to thwart the work of Christ. . . .

“[Opposition] has been felt in the undying efforts of many, both within and without the Church, to destroy faith, to belittle, to demean, to bear false witness, to tempt and allure and induce our people to practices inconsistent with the teachings and standards of this work of God. . . . “The war goes on. It is waged across the world over the issues of agency and
compulsion. It is waged by an army of missionaries over the issues of truth and error. It is waged in our own lives, day in and day out, in our homes, in our work, in our school associations; it is waged over questions of love and respect, of loyalty and fidelity, of obedience and integrity. We are all involved in it. … We are winning [the war against Satan], and the future never looked brighter” (in Conference Report, Oct. 1986, 55–58; or Ensign, Nov. 1986, 42, 44–45).

The “we” reference in the last sentence refers to the members of the Lord’s Church. The world is losing the war against Satan, but the Saints are winning their war with him. The fight with evil is not a global winner take all fight. The fight with Satan is for each individual soul. We choose whom we follow and whose direction we accept in life. If we choose to follow Christ then we win the war for our agency to be kept intact. Those who lose the war over agency end up forfeiting their agency to Satan. We shall be His people only if we choose to follow Christ over Satan.

Once the Savior comes again and worst of evil is destroyed on the earth, two things will happen simultaneously. To those still living in the flesh, the millennial reign of the Savior begins. Christ will become the head of all earthly governments, and the thousand years of peace will begin. For those who have already died and are righteous, the first resurrection begins. Here is Revelation 20:4 – 6:

4 And I saw thrones, and they sat upon them, and judgment was given unto them: and I saw the souls of them that were beheaded for the witness of Jesus, and for the word of God, and which had not worshipped the beast, neither his image, neither had received his mark upon their foreheads, or in their hands; and they lived and reigned with Christ a thousand years.

5 But the rest of the dead lived not again until the thousand years were finished. This is the first resurrection.

6 Blessed and holy is he that hath part in the first resurrection: on such the second death hath no power, but they shall be priests of God and of Christ, and shall reign with him a thousand years.

Verse four describes those who literally gave their lives in support of Christ and what he stands for. These include those who died because they kept the commandments because they would not bow down to the temptations of Satan and his followers. These followers had no taint of the “beast” in their souls. These are they who are resurrected first among all the children of God, who receive crowns of glory of the highest blessings Christ and the Father have to give, that of eternal life. These are they for whom Christ suffered and died on the cross. These are they for whom the atonement will save from hell.

Verse six says that the second death has no power on those who take part in the first resurrection. The second death is hell. Those who refuse to accept the atonement of Christ will have to pay for their own sins, whose suffering will not be sufficient to redeem them. These are they who will have to spend time in hell paying for their own sins until they have paid sufficiently that they will finally be released from hell by the end of the millennium.

For the length of the millennium, Satan and his followers will be bound by the righteousness of those living on the earth. They will not listen to him or give into his temptations, leaving him powerless for a thousand years. At the end of that time, there will be those who will begin to listen to Satan. Satan and his armies will have one last chance to rally their supporters among the people of earth.

Once evil has mustered its forces there will be one last great battle between good and evil in the battle of Gog and Magog. Christ and his people will be victorious. Those who have paid for their sins to the extent possible in hell will be released. The books will be opened and they will be judged. This is the second resurrection. Those of the second resurrection will go to the Terrestrial and the Telestial kingdoms. Satan and his followers will be bound and cast into perdition forever.

For those who have been faithful in this life and have overcome the evils Satan and his followers have used to try to overcome them, they are promised eternal life with God and Christ. In Revelation 21:3 – 7 we are told that those who are faithful until the end will have all sorrows wiped away. There will be no more pain or suffering and they will live in the presence of God and Christ in happiness forever.

3 And I heard a great voice out of heaven saying, Behold, the tabernacle of God is with men, and he will dwell with them, and they shall be his people, and God himself shall be with them, and be their God.

4 And God shall wipe away all tears from their eyes; and there shall be no more death, neither sorrow, nor crying, neither shall there be any more pain: for the former things are passed away.

5 And he that sat upon the throne said, Behold, I make all things new. And he said unto me, Write: for these words are true and faithful.

6 And he said unto me, It is done. I am Alpha and Omega, the beginning and the end. I will give unto him that is athirst of the fountain of the water of life freely.

7 He that overcometh shall inherit all things; and I will be his God, and he shall be my son.

All things will become new. The earth itself will be celestialized and become as a sea of glass, and our current home will become the celestial kingdom for those who have remained faithful to their covenants.

The New Testament ends on a gloriously upbeat note. There will be much evil to wade through in the last days. In each and every life, there are challenges and trials to be overcome. Each society has their own difficulties to deal with as Satan seeks to destroy all that is good and true. It all comes down to how each and every one of us faces our individual challenges. We won’t be judged as countries, as a people or as families. Judgment is based on our individual behavior and choices.

To avoid the second death, hell, we need to accept Christ’s atonement and be forgiven of our sins. We must remain faithful in whatever circumstances we find ourselves until we leave mortality. To those who do this, the blessings of the first resurrection are the promise. These are they who will come forth from the grave in victory to live and reign with Christ throughout the millennium, and be given an eternal inheritance in the house of God forever and ever. Just choose to be faithful to the covenants you have already made. The path to victory is really simple, even if it is not always easy.