New Testament 45 – He That Overcometh

New Testament 45 – He That Overcometh 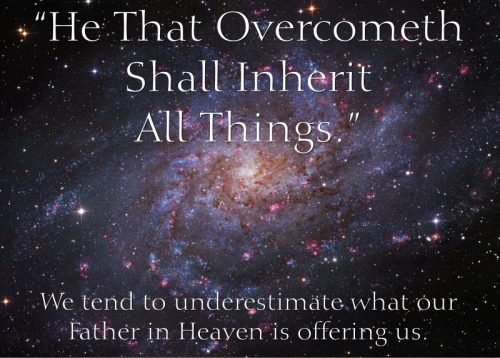 The full title of this lesson is He That Overcometh Shall Inherit All Things. The purpose of this lesson is to remind us that we can use our testimony of Christ to overcome the trials of this world. Doing so will  bring great blessings from our Father in Heaven. Everything in the universe belongs to God, so to be told we will inherit all things is no mean or stingy inheritance.

Jesus was raised in a culture that spoke heavily using symbolism, and it was largely of his own doing. As Jehovah, the revelations He gave to the prophets were heavy with symbolic imagery. This is why Jesus taught in parables, stories full of imagery that conveyed lessons. When John has his vision on the isle of Patmos, he communicates what he sees using imagery. It is important to note that not only are the things he saw in his vision real and literal, but they also have spiritual messages and lessons in them. These lessons are taught through the images John uses. This lesson is pretty straight forward, but the next lesson has heavier imagery in it.

There are only a few images we need to know about in this lesson. I have listed them to make it easier to find and follow along in the scriptures.

Setting for the lesson

John was filled with the Holy Ghost on the Sabbath day. He heard a voice, like a trumpet behind him. Turning around to see who was speaking to him (the angel) he saw a menorah. Standing with the menorah was Christ, dressed in temple priest’s robes, and holding seven stars in His right hand. Christ makes it clear that he is present among the seven congregations or churches he will be talking about, and that he carries his chosen servants in his hand. In other words, he supports and holds them close to Him. These are ways to indicate that he is aware of and concerned for the welfare of both the congregations and their leaders.

What the Lord wants changed

Without pinning down each congregation’s sins, let’s just look at a partial list of spiritual crimes that have been committed then we will go over what the Lord praises the people for doing.

10 Fear none of those things which thou shalt suffer:behold, the devil shall cast some of you into prison, that ye may be tried; and ye shall have tribulation ten days: be thou faithful unto death, and I will give thee a crown of life.

10 Then the white stone mentioned in Revelation 2:17,will become a Urim and Thummim to each individual whoreceives one, whereby things pertaining to a higher orderof kingdoms will be made known;

11 And a white stone is given to each of those who comeinto the celestial kingdom, whereon is a new name written, which no man knoweth save he that receiveth it.The new name is the key word.

26  And to him who overcometh, and keepeth my commandments unto the end, will I give power over many kingdoms;
27  And he shall rule them with the word of God; and they shall be in his hands as the vessels of clay in the hands of a potter; and he shall govern them by faith, with equity and justice, even as I received of my Father.

Do you see the pattern in these two sections? Those who have allowed themselves to be led astray by the lies of others or by their own laziness in the gospel, are told they are going to suffer many things. The Lord is very clear in his displeasure over their allowing evils to be practiced among His people.

To those who are obedient and keep the commandments, they are given power to overcome the temptations of the world. The Lord promises revelations and wisdom, kingdoms and glory beyond human imaginings. The power of God’s word, that two-edged sword, has the ability to both recognize the evil and identify the nature of it, and to recognize the good of the Saints and the virtues they have exercised.

As we go about our own efforts to keep the commandments, we should remember the Saints in the original church and the sins that crept into their worship. We may be separated by time, but we are exactly the same in our disposition and practice. If we are not careful about keeping strictly faithful to the covenants we have made, Satan will carefully lead the members of the Church into forbidden paths, causing us to lose all the promises made to those who faithfully keep the commandments and will eventually inherit all things.