New Testament 28 – We Are Witnesses

New Testament 28 – We Are Witnesses 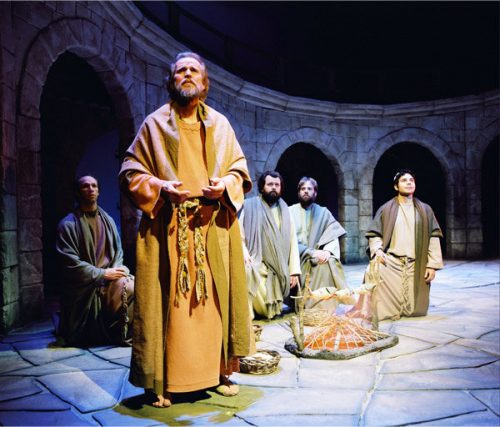 The last thing Jesus said to the apostles before ascending to heaven was to promise to them, yet again, of the coming of the Holy Ghost. With the Holy Ghost they would be able to have the power to be witnesses of Him throughout the world. This begs the question of how the Holy Ghost helps us bear witness of Christ and His gospel.

Before the day of Pentecost, about a week after Christ’s ascension to heaven, the apostles and disciples had problems understanding the parables and teachings of the Savior. Time and time again the Savior told them He would be crucified and would be buried in a tomb, only to rise from the dead on the third day. And time and again the disciples failed to grasp the import of what He was saying.

After Christ was resurrected and met the two men on the road to Emmaus, he spend hours educating them from the scriptures about the necessity of Christ’s death and resurrection, and how all the prophets had foretold of these events. They recognized the teachings, and later remembered that while He was teaching them their hearts burned within them. But even then their eyes were not open to the source of these teachings, their own Savior who was walking with them.

Once the day of Pentecost came, and the disciples experienced the baptism of fire, the full endowment of the gift of the Holy Ghost, notice how the level of their understanding of the Savior’s teachings increased dramatically. Whereas before the apostles were constantly going back to the Savior to ask for clarification, now we see in the first five chapters of Acts Peter teaching with power AND understanding that wasn’t very apparent before.

It was like all the pieces of the puzzle had begun to fall into place and the apostles were beginning to see the bigger picture. They were now understanding Christ’s mission not from the standpoint of a follower who just witnessed events, but as witnesses, hand chosen by God to bear solemn testimony that would be binding on those who received their testimony. Now they knew and understood Christ and His mission in a whole new way. It was like they now knew not only the stories of Jesus, but comprehended Christ as being the very Son of God. Such is the witness to our souls when we receive a testimony from the Holy Ghost.

As ardent an admirer of the Savior as Peter was, willing to go to his death for Jesus on the evening of the last supper, he still denied Him three times in one night. This is the man who had received a witness from the Holy Ghost earlier in the ministry about the divinity of Christ. Jesus told Peter that his knowledge of Him as the Messiah had come from God and not men. Yet, when faced with accusers and possible arrest, Peter caved and ran.

How different is that from the man we now see before us after the day of Pentecost. Now we see Peter not just as the senior apostle, but as a leader of twelve extraordinary men. He faces down the members of the Sanhedrin with conviction and power. His words never falter. His position never wavers. He has a strength of bearing that only someone who is a personal witness can have. He now knew, or was beginning to comprehend the power of what he had witnessed in the ministry of the Lord, Jesus Christ.

When Jesus was resurrected, only those who were faithful to Him were allowed to see Him in His resurrected body. Jesus no longer walked the streets among the people. If you didn’t already have a faithful witness of Christ, you would have to take the word of one of His servants who had seen Him and believe on their word alone. In the strength of their new-found conviction of the Savior’s mission, the apostles went boldly into all sorts of scary situations, and were undaunted by threats. In fact, when they were beaten and sent home with the charge never to speak of Christ again, they went home rejoicing that they had been found worthy to suffer for Christ’s sake.

In Acts 3 Peter and John go to the temple and there they meet a man who has had palsy his whole life. The man is over 40 years of age, and was a well-known fixture outside the temple gates. I love this verse:

4 And Peter, fastening his eyes upon him with John, said, Look on us.

I didn’t used to think anything of that verse, until recently. Now when I read that “Peter, fastening his eyes upon him … said, Look on us” I get chills. Something inside me tells me that the Spirit was directing Peter. As a special witness of Christ, the apostles do what Jesus would do in their place, and that means doing good however they can. Peter did not heal this man as a publicity stunt. He was directed by the Holy Ghost to do so. When he “fastened his eyes upon him” he was receiving instructions from the Holy Ghost as to what the Lord wanted them to do in His service. They followed those instructions and healed the man.

And, lest you ask which prophet said that is what was happening, I don’t know of one. But I have seen that look in the Brethren’s eyes when they look at someone and you can see that divine communication is taking place at that moment. I’ve seen it enough to recognize the signs of sacred communion with God to know that Peter was being directed in his actions. This is inspiration in its pure form. He went to perform his responsibilities, not knowing before hand what would happen, but followed the promptings he received, and miracles took place.

When we are baptized, we make covenants with the Lord “to stand as witnesses of God at all times and in all things, and in all places that [we] may be in …” (Mosiah 18:8 – 10). Without the Holy Ghost we are like Peter and the apostles before the resurrection of Jesus. We can have good intentions, and the spirit is certainly willing, but the flesh is weak.

But with the Holy Ghost, He enlarges our understanding of the gospel. We comprehend spiritual things, we understand more readily how the pieces of the gospel puzzle fit together. We gain a sense of appreciation for the wonderful works of God. We cannot witness to others that with which we have had no experience. A witness must have experienced what they witness about.

Because of the testimony received through the Holy Ghost, we are made bold in our knowledge of spiritual things. We are able to tell people what we have experienced, whether the experience was small or great. The scriptures promise us that as we bear or carry that testimony from us to someone else, the Spirit will impress the truthfulness of our witness on their heart so they cannot justifiably deny the truthfulness of the witness. We don’t have to be scholars or important people, just someone willing to open our mouth and say what we have experienced.

Strength comes from the Holy Ghost in the form of certainty of what we know. But that certainty is cemented in us with the sharing of our knowledge. At first we are often nervous or scared to say anything about our experiences with the Holy Ghost, but as we become accustomed to testifying our ability to do it better and more appropriately is magnified by the the inspiration we receive as we bear our testimony.

It is important to remember that a testimony is not a script that we memorize and deliver on cue. A testimony is lived by example, is part and parcel with who and what we are in life. When we need to bear our testimony with words, we can rely on the inspiration of the Holy Ghost to help us know what to say next so we can best serve the needs of the person with whom we are speaking.

Being a witness isn’t always easy. Sometimes there are social or physical consequences, like when the apostles were beaten and sent home with the charge to never speak of Christ again. But they rejoiced in being worthy to suffer for the sake of God and His message to His children. For Jesus had made it clear to them that the world would punish those who spoke out for Him, but He would bless them with eternal blessings for being willing to shoulder that burden out of love for others.

As you reread Acts 1 – 5, look at how changed the apostles are once they have received the gift of the Holy Ghost. Ignore the big events, like the day of Pentecost. Look instead at the change in their personal bearing and power. Once they had the gift of the Holy Ghost, that made all the difference in how faithful and consistent they were able to be in their discipleship. We can expect the same in our lives. The Holy Ghost works the same way today as He did then.

As we seek the companionship of the Holy Ghost, and commit to opening our mouths to share what we have personally experienced in the gospel, the Holy Ghost will give us greater understanding, more strength of character, and inspire us to do and say those things that will enable us to be witnesses of Christ at all times and in all places.