New Testament 25 – Not My Will, But Thine

New Testament 25 – Not My Will, But Thine 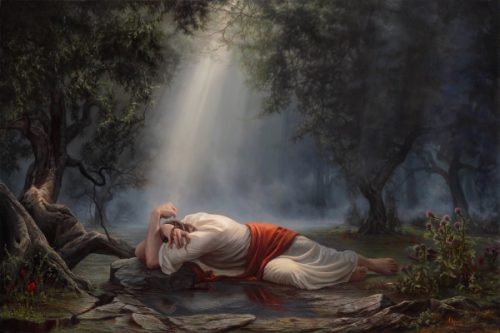 The purpose of this lesson is to help each of us gain a little deeper appreciation for the sacrifice made by Christ in the garden of Gethsemane. What we seek, eternal life, is made possible by what happened in that garden. The main event in the garden, Christ submitting His will to the desires of our Father in Heaven, was only the first half of the atoning sacrifice. The second half will be discussed next week.

What happened in Gethsemane?

When Jesus went into Gethsemane it was with the purpose of beginning the sacrifice that He alone could make for the salvation of all of God’s family. No one had the physical, mental, spiritual, or moral constitution to handle the punishment He would have to endure in order to make the payment for the sins we commit.

Think back for a moment to a time when you did something wrong and felt, for the first time, the horror of what you had just done. There is panic that rises in the throat that you will be caught. Shame overwhelms us and we want to hide or run away. We are filled with sorrow for the pain that will fill the lives of others when they find out what we did, or remorse for the pain we have already caused. It feels as though a great weight has been placed on our back, and it can be difficult to breath in those moments. Sometimes in moments of extreme acceptance of the sin, physical things happen. I know I was so distraught over something I had done when I was younger that I gave myself a gusher of a nosebleed, and I don’t get nosebleeds.

This is a description of a full realization and acknowledgment of just one sin. Now compound that kind of experience, but worse, for every human to ever live, anywhere. The full punishment of violated eternal law had to be satisfied by the Savior alone. He was a man of purity, innocence, and love, suffering for the wrongs committed by all of His brothers and sisters. These were feelings and emotions that were completely new and foreign to Him. He had never done a willful or stubborn thing in His life. This was a sacrifice of supreme love, to willingly take upon himself the weight of eternal punishment for our own stubbornness and willfulness. He submitted himself to the will of His Father because He loves His Father completely. He proved to us all that He is willing to do anything, literally, to show His love for God.

And the punishment wasn’t just physical pain. When we suffer for breaking a law of God there are spiritual punishments that come to bear as well. The anguish was so bad that what He suffered could not have been endured by a human and still live through it. By pure will He held His mortal frame together as the suffering tried to tear him apart (so to speak). It was so excruciating that the blood in his veins could not be kept within the confines of his vessels. Blood dripped from every pore of his body in great drops. Here is a quote from the lesson manual.

Elder James E. Talmage taught: “Christ’s agony in the garden is unfathomable by the finite mind, both as to intensity and cause. . . . He struggled and groaned under a burden such as no other being who has lived on earth might even conceive as possible. It was not physical pain, nor mental anguish alone, that caused him to suffer such torture as to produce an extrusion of blood from every pore; but a spiritual agony of soul such as only God was capable of experiencing. . . . In that hour of anguish Christ met and overcame all the horrors that Satan, ‘the prince of this world,’ could inflict. . . . In some manner, actual and terribly real though to man incomprehensible, the Savior took upon Himself the burden of the sins of mankind from Adam to the end of the world” ( Jesus the Christ, 3rd ed. [1916], 613).

The payment made by Christ had to be complete enough that His payment alone would satisfy any demands the laws of justice might cry for for the rest of eternity. In other words, the payment was eternal in duration. No matter what happened after his payment, God could never come back and demand more payment for anything anyone ever did ever again. It was just that complete. But as great as that payment was, He also felt the anxieties, the depths of depression, the rage, the emotional baggage of every person to ever live. He experienced it all. This is why the scriptures tell us that He descended below all things so He could rise above all things. There is no suffering we can go through that He has not already suffered a thousand times more.

The purpose of His suffering

So what was all this for? Mankind was fallen from grace. We had become sensual and devilish, seeking to satisfy the appetites of the flesh. These are counter to the will of God. That is why we commit sin. Those sins have cut us off from ever being able to return to His presence. Because Jesus was willing to submit His will to His Father’s, and pay this ultimate sacrifice for us, He was able to set terms we could handle that would allow us to try over and over again to become better until we also learn to seek only the will of our Father in Heaven. Only then can we become clean enough to enter into His presence again.

Jesus became our mediator, He stands between the demands of the eternal justice of God, and we who are constantly violating those laws that require reparation. Jesus, because He has personally paid the price for our sins, can turn around to us and offer us mercy, based on the conditions that we believe in him, exercise faith in what He teaches us, and we repent of our bad behavior and change for the better. If we are willing to do this, submit to His will, we may experience sorrow and emotional suffering to the highest degree we are capable of, but even though it is not enough to satisfy the demands of God’s justice, it will satisfy the demands of Christ’s mercy, and we can be forgiven of that sin.

This is the purpose of His suffering. He made it possible for all of us to be redeemed from our permanently fallen state, and able to be taught how to become like Him so we can be worthy to walk back into the presence of our Father in Heaven, clean and pure once again from the taint of mortality.

The other half of salvation

Not only does the payment Jesus made in Gethsemane make it possible to become clean from the blood and stains of mortal life, but because He resurrected Himself on the third day after His crucifixion, He opened the door for us to also be resurrected. Without resurrection we would remain as spirits after this life for all of eternity. We would never be able to live with God and become as He is.

Resurrection makes it possible for us to be brought before Christ in physical form, eternal physical form, to be judged by Him of the works we did in mortality. This part of the atonement was a free gift from Him. Both the righteous and the wicked will receive the gift of resurrection. We will all live forever with a glorified body of flesh and bones because Jesus resurrected Himself because God commanded Him to do it.

For those who repent this means they will be able to be resurrected with celestial bodies that can live and thrive in a celestial environment which is where God lives. Even those who reject the offer of payment for sin made by the Savior, though they will have to suffer as much as they are able to suffer for their own sins, He will eventually release them from hell to be resurrected with less glorious bodies, and they will be happy with the mercy shown them.

Purpose of the lesson

The atonement, the reconciliation made by Christ on our behalf is the central doctrine of our religion. It is everything. All teachings hang on this one belief. There is nothing that exists in our faith that lies outside of the effects and purposes of the atonement of Christ. Any peace we seek or hope to achieve in this life or the next depends on our faith in Christ and His atoning sacrifice. Everything the Holy Ghost teaches us to be and do comes because of that sacrifice. Forgiveness for sin is made possible because of Christ’s sacrifice in the garden of Gethsemane. Eternal life is possible because of it, but only if we, like Him, learn to submit our will to God’s in all things.