New Testament 23 – Love One Another

New Testament 23 – Love One Another 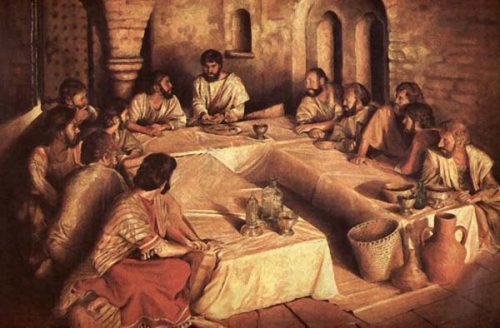 We can never accurately accuse the Savior of wasting time. This is very true of the Passover meal we refer to as the Last Supper. This was His last chance to give direction and counsel to His apostles, and during this meal he spent the whole time giving them last minute instructions and prophecies to help them through the dark times that would commence that evening. His main admonition to His apostles was to love one another as He had loved them.

Begin at the End

Of all the counsel Jesus gave His apostles the night of the Last Supper, the most important was His last commandment to them to love one another as He had loved them. Everything else they had been taught that night led up to this counsel and showed them how they were to demonstrate their love for one another. Now that we know where all of His instruction is headed, let’s go back to the beginning and start where He started.

Back to the Beginning

At some point in the evening, Jesus took bread, brake the bread into pieces then passed the pieces to those in attendance at the feast. Before passing the bread He blessed it. The passage is Luke 22:19 – 20. He also blessed the wine and passed it to the apostles to drink. None of them fully understood what Jesus was talking about when He instituted the ordinance of the Sacrament. That understanding came later, after they received the gift of the Holy Ghost.

I will point out here that in the first 22 verses of this chapter Jesus prophecies of what is to come at least eight times. That means that almost half of the first 22 verses contain evidence of His ability to foretell what would happen, most notably to Himself. But it doesn’t stop there. He continues to tell the apostles what will happen in the future as the night continues.

Let’s switch to John 13. Early on in the evening, once all the apostles had sat in their designated places around the table, the Savior got up and girded His loins so He could wash the feet of the apostles. The Church has some wonderful Bible videos that demonstrate many aspects of life as discussed in the Bible. Here is a short video on what it means to gird one’s loins. As you watch this, think about the significance of the phrase and how it affects your personal behavior in the kingdom. This phrase is used a number of times throughout the scriptures where we are all told to gird up our loins and go to work in the Lord’s service.

Can you see Jesus with a basin on water, with His loins girded, on His knees on the rough floor washing the feet of His apostles? Once there, it is an image that is difficult to remove from your head. As He works His way around the table of, no doubt, astonished apostles, He gets to Peter. Peter, embarrassed by what this service represents in the local culture, refuses to allow such service to happen. The reference is John 13:6 – 9:

6 Then cometh he to Simon Peter: and Peter saith unto him, Lord, dost thou wash my feet?

7 Jesus answered and said unto him, What I do thou knowest not now; but thou shalt know hereafter.

8 Peter saith unto him, Thou shalt never wash my feet. Jesus answered him, If I wash thee not, thou hast no part with me.

9 Simon Peter saith unto him, Lord, not my feet only, but also my hands and my head.

Even though Peter was assured by Jesus that he would understand His actions in a bit, Peter just didn’t feel right about allowing his master to perform this lowly service. When he learned that it was a requirement, his pendulum swung the other direction and he wanted Christ to wash both his hands and his head as well, both things servants washed as a guest in someone’s house. Jesus assured him the feet were sufficient.

The importance of service

The apostles struggled with the concept of position in the kingdom of God. Almost everything in their daily life put them into a slot or position socially. Even eating at the table was done by order of importance to the host. In this chapter it talks about the apostle that was especially loved by Jesus who rested his head on Christ’s bosom. This is a reference to where he sat at the table in relation to Jesus, who was at the head of the table. Watch this short video for a great demonstration of what this means.

Even as apostles they seemed to feel ranked (which they were, but not in the same way as they experienced socially). So they wondered what heaven would be like, and what they might need to do to raise their position there. This is not the first time this conversation had been held, but they still had not learned the lesson. Jesus used his own service to demonstrate to them how the kingdom of God works. In the world, the master is the greatest, and the servant is the lowest in a kingdom. In God’s kingdom it is just the opposite. The most humble servant is regarded as the greatest of all, and therefore given the greatest honors.

In the world greatness is determined by social power, which one can take by force. In heavenly things greatness is determined by an attitude of service and love. Power is then awarded to those who love and serve the most by God, our Heavenly Father. The two systems are completely opposite each other. On earth a person can take power. In God’s kingdom a person is given power because of service to, and love for, others.

In verse 16 Jesus says, “Verily, verily, I say unto you, The servant is not greater than his lord; neither he that is sent greater than he that sent him.” This is the example He wanted them to learn. The Master is our Father in Heaven. We are all His servants. No matter what our position or lot in life we are all God’s servants, doing and fulfilling His will. This is our place. We are learning from our Father how to become like Him. It happens through the lessons we learn as we serve one another. We are never greater than He who sent us on our errand. If the apostles could learn just this one lesson, they would have learned a lot. We are all here to serve, not to rule. For now, only one rules, and He is God. The day will come when His children will receive their rewards and be made rulers, but that day is not during our time in mortality. Here we learn to serve and be the best servants we can be.

There were more lessons taught and hopefully learned that night before Jesus went to Gethsemane, but this lesson of service was critically important that the apostles understand before Jesus went away. Now the questions are put to us. Do we understand our place? Do we understand what it takes to be great in the kingdom of heaven? Are we willing to gird up our loins and serve our neighbors, and perform the labors assigned to us by our master? Are we willing to give our lives in the service of others so we can learn to love as Jesus loves?