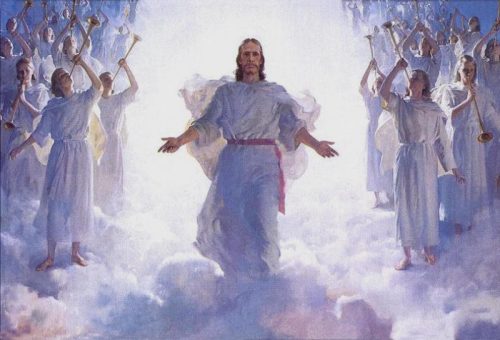 Even though this lesson is about what is written in Matthew 24, it is easier to understand if we look at two additional accounts of what is covered in Matthew 24, Joseph Smith Matthew in the Pearl of Great Price, and Doctrine and Covenants 45.

Jesus warns the disciples that after He is gone chaos will erupt in the Church. There will be false Christs, false prophets, betrayal, and general tough times. Here are the verses from Joseph Smith Matthew 1:6 – 11:

6 For many shall come in my name, saying—I am Christ—and shall deceive many;

7 Then shall they deliver you up to be afflicted, and shall kill you, and ye shall be hated of all nations, for my name’s sake;

9 And many false prophets shall arise, and shall deceive many;

10 And because iniquity shall abound, the love of many shall wax cold;

11 But he that remaineth steadfast and is not overcome, the same shall be saved.

During the times of Paul, the apostle, when the Church was spreading across the middle east and westward to Rome and beyond, it was very difficult to maintain control over the doctrines and practices of the members of the Church. They were separated from the apostles in Jerusalem by such great distances, and only occasionally saw or heard from an apostle.

If you think about the difficulty Joseph Smith had in regulating the Church and putting down false doctrines during his lifetime, multiply that by many times over and that is the problem the apostles had. The members were all converts from pagan religions, or were Jews who still saw the new faith through the lens of the Law of Moses. There were many questions about doctrine, policies, procedures, and attitudes, but only rare visits from the apostles to bring them back into line with the truth.

Unfortunately, there were also subverters and opportunists in their midst. There were those Jews who sought to bring down this new Jesus religion by trying to tear apart the congregations of the believers. There were also people who saw an opportunity to gain a following and obtain power over the people by preaching their own brand of what Jesus taught. There were many wolves among the sheep in those days. It was a constant battle for the apostles to correct all the false ideas that constantly popped up among the far flung congregations of the Church.

Those who wanted to blame someone for political unrest among the people or who sought to destroy the new religion, used the Christians as their scapegoat. They blamed them for everything in the book in an effort to gain political power and favor with the masses. As those outside the Church began to point fingers at their neighbors they either knew to be or suspected to be Christians, the members of the Church began to turn on one another. It was a difficult and unsafe time to believe in Jesus.

Destruction of the Temple in Jerusalem

The Jews finally entered into wholesale revolt against Rome in A.D. 66, and by 70 A.D. the Romans moved in and decimated the city of Jerusalem. They laid siege to the city and the people eventually turned to cannibalism to survive. When the Roman army entered the city, and by the time they had put down the revolt, they had slaughtered upwards of 1.1 million men, women, and children, and ripped the city apart, including the temple. The Savior had prophesied that this was just the beginning of their punishment for killing Him. They were then scattered to the winds, a nation without a home for the next two thousand years. And during that whole time they have been hated and ill used in every place they have ever tried to call home.

The Savior told His disciples that this was only the first time Jerusalem would be destroyed. It was referred to as the abomination of desolation. It would happen again in the last days, only worse, if you can imagine it, the second time. Without getting into details, the Lord promised His disciples that He would personally come and save them from complete destruction the second time.

End of the World

I have long wondered why people are becoming so cruel to one another. Why are they so bold about openly hurting one another for sport or out of vengeance? I found my answer in Joseph Smith Matthew 1:10: “And because iniquity shall abound, the love of many shall wax cold.” I had always been taught that Satan hates us as much as Jesus loves us. That concept always troubled me. But now that I see people forsaking the teachings of Jesus, and the growing animosity between people and nations, I can see that the end result of the complete abandonment of the Christlike attitudes of love and forgiveness can only lead to wholesale war and bloodshed among all people.

We are told that in the last days there will be wars and rumors of wars, and that people will take up the sword and kill each other. All nations will be in commotion. The Lord will respond with famines, earthquakes, the sea heaving itself beyond its bounds, hail, and finally, a devastating scourge that will sweep the globe. The reaction of the people to these events will be to curse God and die.

Sometimes these events can seem very unsettling and scary. We see them happening with increasing frequency and ferocity around us every day. The news is loaded with accounts of unexplained violence and destruction. With all this happening, how are we supposed to react? What is our attitude supposed to be to all that is happening and is going to happen?

In October Conference of 1992, Elder M. Russell Ballard said this about how we should face the challenges of the last days:

“Although the prophecies tell us that these things are to take place, more and more people are expressing great alarm at what appears to be an acceleration of worldwide calamity. . . . Admittedly we have ample reason to be deeply concerned because we see no immediate answers to the seemingly unsolvable problems confronting the human family. But regardless of this dark picture, which will ultimately get worse, we must never allow ourselves to give up hope! . . .

“ . . . The Lord is in control. He knows the end from the beginning. He has given us adequate instruction that, if followed, will see us safely through any crisis. His purposes will be fulfilled, and someday we will understand the eternal reasons for all of these events. Therefore, today we must be careful not to overreact, nor should we be caught up in extreme preparations; but what we must do is keep the commandments of God and never lose hope!

“But where do we find hope in the midst of such turmoil and catastrophe? Quite simply, our one hope for spiritual safety during these turbulent times is to turn our minds and our hearts to Jesus Christ. . . . Armed with the shield of faith, we can overcome many of our daily challenges and overpower our greatest weaknesses and fears, knowing that if we do our best to keep the commandments of God, come what may, we will be all right” (in Conference Report, Oct. 1992, 41–43; or Ensign, Nov. 1992, 31–32).

Here is a quick recap of what Elder Ballard said. Things will get far worse, but don’t give up hope, because Christ is in control. He has given us the information we need to weather the coming storms.

The key is to put our faith in Christ and stand in holy places. The holy places are our homes, wards, stakes, and the temple. First of all, remember that if it wasn’t for the Lord telling us that these things will be coming, we would be completely clueless and in the dark about the future. But knowing the future, and how bleak it looks should remind us that it is only bleak for the wicked. The righteous need not fear.

The Lord is coming again. This time He will reign as King of Kings and Lord of Lords. He will not be here as the lowly servant of all, as He was the first time. This time He will come to rule the earth. The righteous will be protected and saved in His kingdom because of their obedience to His commandments. There is safety in the commandments of God. As we see the world slipping further and further down the slippery slope of sin, just remember you know of a place with sure footing, a place of complete safety for the soul. That place is available to anyone who is willing to put their faith in Christ and keep His commandments.

We have the signs of the times. We know that the world (the wicked) will be burned when the Savior comes again. But we also know that all those, living or dead, who kept the commandments of God will be caught up to meet Him when He comes with the hosts of heaven and the earth is purged of all unrighteousness. We will be there with Him when he comes to rule personally on the earth. We should look forward to His coming. The wicked will dread it, but to His faith Saints, this is a time of great rejoicing. We are alive to see the ancient prophecies and promises fulfilled!