New Testament 18 – He Was Lost, and Is Found

New Testament 18 – He Was Lost, and Is Found 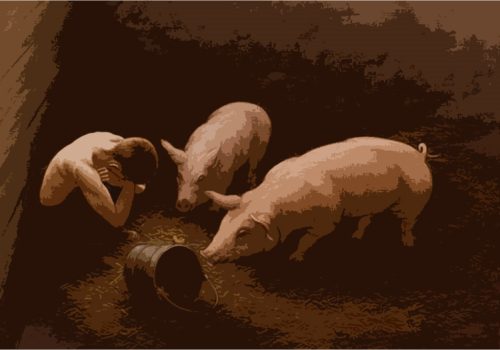 The scope of this lesson covers the parables of the lost sheep, the lost silver coin, and the prodigal son. Since the lessons behind all these parables can be found in the story of the prodigal son, I think that is where we will focus for today. The lesson we need to understand is the value of a soul. We need to redefine what it means to be lost, and how important it is that we be found.

The reading assignment is Luke 15; 17

Here is the two-penny tour of this parable. Rich boy doesn’t want to be tied to daddy’s purse strings, so he demands his inheritance. Daddy gives it to him. Rich boy takes it all and leaves. He squanders what he has been given and is left a pauper. After nearly starving to death he decides it was better at home. He returns home and asks forgiveness. His father rejoices and celebrates. His brother is angry for the fuss made over the wasteful brother. Lessons taught by their father.

That was reasonably painless, wasn’t it? Now let’s look at the characters in this marvelous parable and try to see ourselves in the various characters of its story.

As a simple story I think we can all see a teenager or young adult behaving in the manner of the wasteful young man. He wanted his freedom. He wanted what he arrogantly believed belonged to him, even though an inheritance is technically what you receive once your parents are dead an no longer need what you receive.

But this young man wanted it all, and the fact that his father and family were still making use of what he believed to be rightfully his, doesn’t seem to have made much of a difference. His selfishness and insistent desires overrode all other considerations of anyone else’s comforts or needs.

The Prodigal demanded his inheritance even though he had not yet earned it. His father gave up part of his own livelihood to satisfy the demands of this spoiled young man. In his eagerness to be free of his father’s rules and the restrictions of the household and family, the boy gathers all of his possessions and travels to a far off land.

Without the restraints that come from the bonds of love and family ties, the boy squanders all that he had been blessed with, leaving himself penniless and powerless. He was left working for a man who cared nothing for him. He would not even feed him. If the boy could have, he would have eaten the carob pods the pigs were eating, but they were completely inedible. He was faced with starvation. Alone, living with that which his religion deemed unclean, and missing home and the comforts of his father’s household, the young man began to realize that even the servants in his father’s house had it better than he did at that moment.

Funny what starvation can do to adjust our attitude. At this point he determined that being a servant in his father’s house would be far better than what he was living with now, so he determined to return and beg for forgiveness. He understood that he had no rights to claim anything from his father. He had given up those rights when he demanded his inheritance. He had set himself free of his father’s rule when he had taken his goods and left the family. To return he would have to go on the grounds of a supplicant, a beggar. His father now owed him nothing.

Us as the Prodigal

Our Father is God. Our inheritance is eternal life in the presence of our Father. In mortality we have been given all the keys to happiness and prosperity. They have been given in the form of commandments. When we violate those keys or laws of happiness we are like the prodigal son who desired to live in excess. We waste our inheritance on the goods and ideologies of this world. We seek for that which gives no satisfaction. We devote ourselves to worthless pursuits. We engage in activities and practices that harm our souls and bring us to the brink of spiritual starvation and ruin.

Notice that it wasn’t until the son was completely ruined that he “came to himself.” How deep will each of us have to sink before we begin to see that the course or path we are on is one of destruction and despair? How close to spiritual starvation will each of us have to come before we are hungry enough to eat the table scraps from our Father’s table? In other words, we will take what we can get, no matter how humble the source. How low do we have to sink before we are finally willing to listen to our Father?

In this story the Father never pushed the son away, he went at his own insistence. We disobey and ignore God’s commandments at our own insistence. At no time does our Father ever push us away. And just as the father rejoiced when he saw his son returning, so our Father rejoices when He sees we are finally choosing to come home again.

The wiser son was obedient to his father. He did all that pleased his father. We have every indication that he was faithful in all things. Yet when his shameless brother returned, their father rejoiced and celebrated. He killed the fatted calf and threw a big party. There was singing and dancing, and great rejoicing.

The faithful son was filled with anger and jealousy. Never had he been made a fuss over. Never had his father given him a fatted calf and a party, yet his brother, who broke the hearts of the whole family, had robes, rings, and great honors bestowed upon him when he returned, after squandering his father’s property and substance. Their father had to entreat the older son not to be angry and to come in and rejoice in the return of one of their own, his little brother.

The father also had to remind the brother that everything the family had would be his someday. The impression given is that what the obedient son would receive was far in excess of what the prodigal had received. He also had his father’s admiration and love for his faithfulness.

The obedient son was short sighted. He was selfish. All he could see was someone getting something he had not been given. He wasn’t seeing how much he already had. He discounted the respect and love his father had for him, and he did not understand the value of his brother, wasteful as he was.

We as the Obedient Son

Sometimes we pat ourselves on the back and congratulate ourselves for the good things we do. We can’t think of anything we have done wrong, and hold ourselves as superior to those who have broken God’s laws. We feel above them, superior. We may not say it out loud, but our attitudes show it. We are no less lost than the obedient son.

We are the ninety and nine sheep, the wages of the widow she can account for. We are the storehouse of the Lord, His sheaves that bring Him glory. We have not had to suffer as the prodigals have to suffer, for we have been obedient. We have not had to come to starvation’s door and been turned away to die. Our prodigal brothers and sisters have. Yet when they want to come back, even if it is as the lowest servant, how often do we begrudge them repentance or  forgiveness? How often do we refuse to trust them or support them in their efforts to change and be acceptable to our Father?

How many of us have turned our backs on those of our brothers and sisters who have squandered their inheritance from the Lord, and refuse to seek them out and help them come home? The prodigal learns many difficult lessons, and most importantly, he suffered for each and every one of them. He was forced into a state of humility. The obedient son was selfish and unwilling to extend a loving hand of fellowship and refused to seek out his brother. Notice that in the story he refused to come into the house to join in the celebration. His father had to come and seek him out and try to reason with him.

I hope that we find ourselves in the position of the obedient son, and not as a prodigal son. I hope that as an obedient son we are willing to open our eyes and realize how valuable our brothers and sisters are to us. Don’t let them languish in the pig styes of the world. Seek them out and invite them home. They may need to suffer more before they come to themselves and come home, but then again, your efforts to find the lost may save them a world of hurt. And in so doing you will be able to rejoice with those who have been saved, and all can give thanks to our Father above for His great mercies.