New Testament 11 – He Spake … in Parables

New Testament 11 – He Spake … in Parables 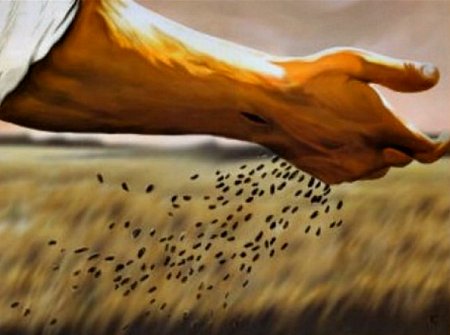 The Lord taught many things during his ministry, but he almost always taught in parables. A parable is designed to be a simple story, unless you have discerning ears so you can detect the lesson behind the story. It is this very thing that separated His real disciples from the rabble masses that followed him. Only those who were truly seeking to learn something found meaning in his stories. Even then, the apostles had to learn how to listen to the parables and decipher their meaning. It is a skill we all have to learn.

This week’s reading assignment is Matthew 13.

Getting to the bottom of a parable isn’t just about knowing the topic of the parable, but about having the ability to see how the parable applies to each of us in a personal way. I’ll admit that you will probably derive insights from the parables in this lesson I haven’t begun to see, but what I can tell you about the parable of the sower, I will.

Parable of the Sower

Here are the verses we will be looking at in Matthew 13:

3 And he spake many things unto them in parables, saying, Behold, a sower went forth to sow;

4 And when he sowed, some seeds fell by the way side, and the fowls came and devoured them up:

5 Some fell upon stony places, where they had not much earth: and forthwith they sprung up, because they had no deepness of earth:

6 And when the sun was up, they were scorched; and because they had no root, they withered away.

7 And some fell among thorns; and the thorns sprung up, and choked them:

8 But other fell into good ground, and brought forth fruit, some an hundredfold, some sixtyfold, some thirtyfold.

The caution about any parable is to not stretch its intent too far. Every comparison has a breaking point, a point beyond which the comparison no longer is valid. I’ll try not to get to that point.

Who is the sower, the one doing the planting? It could be Christ, and it could be anyone who does missionary work or bears testimony. Those last two are kind of the same thing. What are the seeds? I would say that the seeds are the gospel message itself. This brings us to an interesting point. Sowers in those days broadcast the seeds. In other words, they reached into a bag, grabbed a handful of seeds then threw them in a horizontal arc in front of them. The seeds fell where they may. The sower would walk through the field casting handful after handful until all the seeds were gone from the bag. There were no machines to do the planting back then.

The various types of soil the seeds fall into represent the various types of conditions of men’s hearts when they hear the word of God. We are all in different states when we first hear about gospel. Some are prepared to receive it fully, and others have conditions that prevent it from “taking root.”

The seeds that fell by the wayside represent those people who are so completely engrossed in the things of the world that no sooner is the gospel mentioned than Satan is able, like a bird snatching a free seed, to pluck it out of our hearts so it is as if it was never there. The gospel never even has a chance to make a difference. This is the way he likes it best.

Some people are a little open to the message of the gospel, but have no spiritual depth at the time they hear the gospel message. The message is like a seed that falls among the soil that is full of stones, there is a little bit there to feed the new seed, but not enough to grow it to full flower. These are the seeds that sprout quickly, seem to grow fast, but then, for lack of root, wither under the heat of the sun.

These people are excited about the possibilities of the gospel, embrace the idea of the gospel, and appear promising. But then someone ridicules them or puts pressure on them to go back to their old ways, threatens to cut them out of the family, etc. This trial they face is compared to the sun scorching a young and tender plant that has no root system to allow it to weather the heat of the day. They have no depth of testimony and conversion, and it is easier to go back to the way things were than endure whatever the trial is that presented itself. They are not necessarily shallow people, but they lack the staying power to persevere in their newly found faith. Their faith dies as quickly as it was born.

Notice that there is nothing ever wrong with the soil the gospel seeds fall into. The gospel could work its same wonders in any soul it comes in contact with. What is wrong are all the things in people’s lives that cause the message to die within them. In this case the thorns represent the cares and desires of the world. These other concerns are given greater attention than that of the gospel message, so they crowd out that seed and it dies. This paints a good picture of what the concerns of the world can do to us. If allowed they can take over our lives, and they produce nothing of value. They are, compared to the gospel, just thorns and weeds to be gathered and burned at the last day.

Remember that all the ground was good. The gospel can grow in anyone’s heart. What was not good was what each person had already filled their lives with that either allowed the gospel to grow or forced it out for one reason or another. In this case, the ground was free and clear of the destructive elements of the stones and thorns, and the fowls of the air were not able to snatch up the seeds before they could take root. With care and nourishment the gospel message was able to grow in these hearts until it produced what naturally comes from the gospel, goodness in all its forms. Depending on the person that goodness is expressed as being a 30 fold harvest, 60 or 100 fold harvest.

The point of this last category is that when we remain unencumbered with the things of the world, the gospel message can make a huge difference in our lives, blessing us many times over. The question is, how is my heart doing? I have accepted the gospel, but am I easily offended? Do I let the cares and concerns of the world sometimes choke out the good the gospel could be doing in my life? Sometimes I think we need to do some weeding in our lives to allow the goodness of the gospel to flourish in our souls.

As you look at the other parables in this chapter, think about the condition of your own soul. Are you a stalk or wheat (someone who is productive in the gospel of Christ) or a tare (a weed that looks a lot like wheat when young, but when matured is obviously not what it seemed)? Are we ready to be harvested into the Lord’s barns or are we preparing ourselves to be burned because we are not what we seemed to be? These are the types of questions we need to ask ourselves as we study the parables.