New Testament 10 – Learn of Me

New Testament 10 – Learn of Me 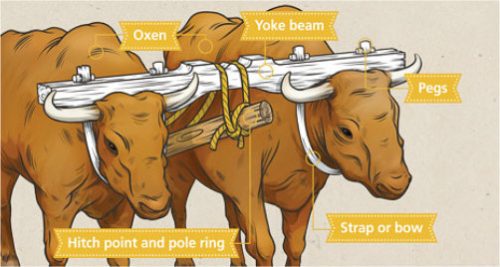 The official title of the lesson is “Take my yoke upon you, and learn of me.” The picture above is from the October, 2012 New Era. It shows how the two animals are yoked or burdened together so they can equally perform the work required of them. Yokes can be customized so that animals of different sizes can work together and appropriately share the workload, making sure that the bigger animal isn’t doing all the work. The yoke also insures that both animals are pulling in the same direction, and at roughly the same time.

The purpose of this week’s lesson is: “To help class members understand that as we take the Savior’s yoke upon us and
do his will, we will find the peace and joy that he has promised.” To that end, I would like to specifically look at the three verses in Matthew 11 where the Lord invites us to be yoked with him. After we discuss these three verses we’ll look at the verses in Luke 7 about the woman who washes the Lord’s feet with her tears. The two stories are actually connected by principle.

28 Come unto me, all ye that labour and are heavy laden, and I will give you rest.

29 Take my yoke upon you, and learn of me; for I am meek and lowly in heart: and ye shall find rest unto your souls.

30 For my yoke is easy, and my burden is light.

I was confused when I first heard about becoming yoked with the Lord’s burdens. My first thought was, “Why would I deliberately put myself under a yoke, a burden or labor, even if he does claim the burden will be light and easy to bear?” It wasn’t for a long time before it occurred to me that the first verse already states the obvious. I am already laboring and am struggling under a heavy load. To be laden with something is to carry a heavy load. So what is this heavy load I am already struggling with. Well duh, my sins! (Some of us take longer to catch on to the obvious.)

As I thought about that concept, if occurred to me that since the commandments free us from the bondage that sin always places us in, I am always struggling to deal with the consequences of my sins. It is a struggle. It is a burden on my soul. It does cause me grief and sorrow. I am indeed heavy laden and labor under this weight I have taken upon myself.

In verse 29 the Lord invites us to trade masters. Instead of letting Satan yoke us and drive us in our sins, Jesus invites us to come to him and share His yoke. Yes, when we make covenants with Christ we take upon ourselves obligations and responsibilities. What are some of those “burdens?” Well, to start off, we need to be sympathetic to the plights of our family, friends, and neighbors. We need to mourn with those that mourn, but we also get to rejoice with those who rejoice. We need to promise to obey His every commandment, even those given to us from his chief servants, our prophet, apostles, and other Church leaders. We pay our tithes and offerings for the welfare of others and the building up of His kingdom on earth. We do our home and visiting teaching and look out for the welfare of others. We promise to wear out our lives in the service of God’s other children.

Jesus promises us that in taking upon us His yoke we will find rest to our souls. Why? Because he is meek, and lowly of heart. He derives no pleasure in our suffering, but wants us to find joy in the things that make him happy. It is these very qualities that make him such a wonderful task master. He drives us by love, only correcting us when we start to wander off or need to learn how to pull together with those we labor. His correction is done with tenderness and kindness.

When he says his yoke is easy, and his burden is light, he is telling the truth. Compared to the yoke we currently labor under with Satan as our task master, the burdens the Savior would place on us are indeed light, and easy to bear. Sin weighs us down, brings sorrow and suffering. We sometimes suffer in the Savior’s employment as well, but there is a difference in the kind of suffering. When we suffer for our sins we are in a dark place, unsupported by love and light. When we suffer for the Savior’s cause we have His blessings and Spirit to support us, lead us, and guide us in what we should do. He gives us hope and joy in the blessings of eternity that will be ours for our labors.

The woman of sin

In Luke 7:36 – 50 we read a story of a Pharisee who invited Jesus to a meal. A woman came to the meal and stood behind Jesus. She wept over his feet, and having nothing else with which to wipe away the tears she rained upon his dirty feet, she used her hair to wipe his feet clean, after which she anointed his feet with expensive perfumed ointment. The Pharisee was offended with Jesus on two counts. One was because, if Jesus was a prophet he should know how great a sinner this woman was, and two, if he was holy he should not have allowed such a sinner to soil him by her touch.

First, let’s look at some historical background. The word Pharisee means “separated.” They believed that in order to keep holy from sin one had to separate themselves from those they considered spiritually tainted by sin. That is why they would not eat or associate with sinners or tax collectors, etc. The Pharisees considered themselves to be the masters of the Mosaic Law. They interpreted the law for everyone else, imposing their own rules and regulations as they saw fit, and usually to their own benefit. They were wealthy and powerful men.

Hospitality in the middle east was such that anyone entering one’s home, even an enemy, was required to be treated with respect. Strangers treated with disrespect was tantamount to a declaration of war. So even though Simon the Pharisee did not appreciate this woman entering his home while he entertained Jesus, there was not much he could do about it. Because they ate in the Roman fashion, on couches, lying on their left side while they ate, the Savior’s feet would have been stretched out behind him, readily available for the woman to approach.

Custom required that when a guest entered your home, in order to show them respect, you greeted them with a kiss, washed the dust off their feet (everyone took their shoes off at the door), and gave honored guests oil to anoint their head and beard so they looked their best after their travels. All of these things Simon failed to do for Jesus. These omissions were a slap in the face to Jesus. This told him that he was not appreciated, and barely welcome, and hardly worthy to be there.

When the woman came up behind Jesus and started to weep for her sins, her tears fell like rain drops on his feet. She wiped his feet with her hair, kissing his feet as she continued to weep and wipe. When the feet had been cleaned in this fashion she broke open the expensive alabaster jar and anointed his feet with the ointment. Simon was offended by such a display.

The Savior, knowing his thoughts reprimanded Simon by asking him a question. If two men owe a debt, one owing ten times the amount of the other, and the master frankly forgives both debts, who will love the master more? Simon correctly answers, him who owed the most and had the most forgiven. Then the Lord rebukes Simon for the social insults, comparing him to the woman. He did not greet him with a kiss on the cheek, yet this woman ceased not to kiss his feet (considered to be the most dirty part of the body). He did not give him water to wash his feet, yet she washed his feet with her tears (again, a sign of the utmost humility to actually kiss such a filthy part of the body). And he did not give Jesus any oil for his head (considered the most holy part of the body), yet she anointed his feet with expense ointment.

The lesson was this, who loved him most? He then looks at the woman and forgives her of her sins. This was his own slap for Simon, whose sins remained.

The lesson, in short, is that to have sins forgiven we cannot hold or harbor any pride in our souls. We must come to the Lord in the greatest humility, considering ourselves less than the dust under his feet. Are we willing to lay our burden at his feet in the form of tears and heartfelt sorrow in the hopes of his divine forgiveness? Are we willing to subject ourselves to whatever public display is necessary to show that we are penitent and humbled? This woman had to go into the home of the rich and powerful and debase herself publicly in order to find access to Jesus so she could plead her cause.

We have no record that she spoke a word, but even if she didn’t, Jesus knew her pain, knew her sorrow, and knew her sincerity. He felt for her and forgave her sins. He, in essence, removed her yoke, the yoke of sin, and put upon her His yoke, which was easy to be born, and light. Her burden was lifted that night for she chose to be yoked with the Son of God.