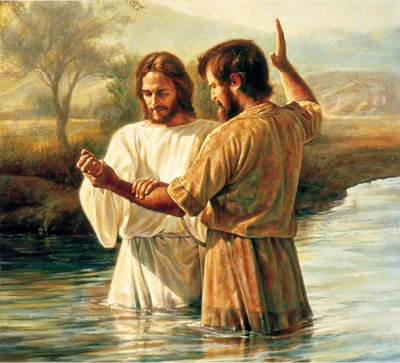 John the Baptist was sent to prepare the way for the Savior’s ministry. He preached repentance and baptism by water, with the understanding that Christ would come and preach baptism by fire. When we repent we prepare for the coming of the Savior, and we begin to make ourselves ready for our own baptism of fire. Repentance is the key.

John was ordained to his mortal calling by an angel when he was but eight days old (D&C 84:27 – 28), the day he was circumcised as per the Mosaic law. He was also baptised as a child. By law, you had to be 30 years of age to be a preacher. John was six months older than Jesus, so he began preaching about the coming of Jesus as the Messiah only a few months before Christ began his own ministry. For only having six months to preach to the people and baptize them with water, John had a great impact.

Even though John’s ministry was far shorter than Christ’s, it was important enough, and impactful enough that prophets foretold of his coming, and Christ himself said that “among those that are born of women there is not a greater prophet than John the Baptist” Luke 7:28. It is a pity we don’t know more about a man of such calibre. He was deeply loved by Jesus.

I can only assume that John was a powerful speaker. When the scriptures say that he came to make the paths straight before the Lord came, it makes me think of all the doctrine that had been misinterpreted and practices that had gone astray over the centuries. John came to teach them correct doctrine and to call them to repent or change their lives and to be baptized with water, which is required of every generation so the full blessings of repentance can be enjoyed.

I was thinking about how we also have been asked to help prepare the way for the coming of the Savior. Then I remembered that we were just told by a member of the Seventy that the days of preparing people to hear the gospel are over. Now we are just to invite people to listen to the missionaries. The Lord is preparing people’s hearts Himself, as part of his hastening of the work. It is now our responsibility to work with the missionaries and invite all to come to Christ’s gospel in a spirit of love. The call is going out, and we need to respond or get left behind as the Lord moves ahead with his program.

John garnered quite a bit of attention. Even the Pharisees and Sadducees came out to listen to his preaching. After calling them out publicly for being a nation of snakes (a generation of vipers), he told them they needed to produce fruits meet for repentance. Interesting phrase that. The fruits are the result of something, and something that is meet is suitable or appropriate. He was calling them to change their ways and produce lives worthy of true repentance.

The Baptism of Jesus

If you want a truly wonderful experience this year when you read the New Testament, be sure to read all the footnotes that say JST. The Joseph Smith Translation (JST) will show Christ in a whole new light. You will love the Savior of the New Testament far more when you see how much more sense he makes and how much more loving he is through the Joseph Smith Translation. That is my personal recommendation to you.

When Jesus came to John the Baptist to be baptised, John was given a special revelation. All my life I have seen paintings and read accounts of John baptizing Jesus and everyone hearing the voice of God announce His Beloved Son, and seeing the Holy Ghost come down from heaven and settle on Jesus, like a dove. It wasn’t until I was studying this lesson that I realized that all of this was shown only to John. No one else saw it! This was John’s personal revelation and confirmation of Christ’s divinity.

15 And Jesus answering said unto him, Suffer it to be so now: for thus it becometh us to fulfil all righteousness. Then he suffered him.

16 And Jesus, when he was baptized, went up straightway out of the water: and, lo, the heavens were opened unto him, and he saw the Spirit of God descending like a dove, and lighting upon him:

17 And lo a voice from heaven, saying, This is my beloved Son, in whom I am well pleased.

In verse 15 the “him” refers to John the Baptist. In verse 16 the heavens were opened to John. It would not make any sense to have them open to Jesus; he already knew who he was. So John heard the voice of the Father witnessing to him (John), personally, that what his son (Jesus) had just done pleased him (God). Not only was God pleased, but he proclaimed Jesus as his son.

The lesson covers a number of other topics, like Jesus turning water into wine, and his temptations before he starts his ministry. These are all worthy of study, especially if you look at the JST additions to the verses. But what I think is most important in this lesson is that we heed John the Baptist’s original cry to prepare ourselves for the baptism of fire that comes from Christ through the Holy Ghost. We have all had the baptism of water. Now we need what only the Holy Ghost can give us, the change of heart that comes through constant repentance and living the commandments. This was the purpose of John’s water baptism. It was to bring people to the point that they were ready for the baptism of fire that Jesus could offer them.