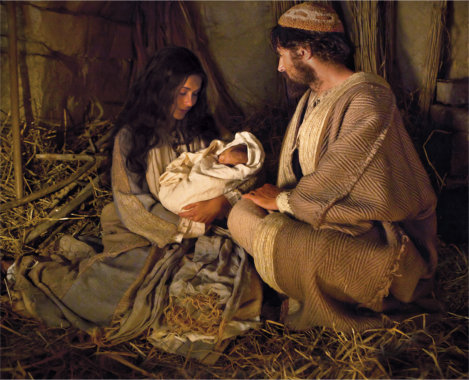 This week I would like to explore what it means to magnify the Lord. The lesson covers events from five people, Mary, Joseph, Elisabeth, Zacharias, and John the Baptist. Each of these people magnified the Lord in their personal lives. By looking at their examples we should be able to find ways to do the same in our lives.

To magnify and to glorify someone is much the same. It is to enlarge their name, their influence, their respect, and their honor. I find it interesting that the people in today’s lesson are all those closest to the Savior as he entered mortality. Even before he was born, those closest to him, who understood who he was, were honoring him and magnifying his name.

What was it about these two couples, Elisabeth and Zacharias, and Mary and Joseph, that prepared them for such great blessings as to be parents of a prophet, and the Lord, respectively? In Luke we are either told outright or are shown by the situation that each of these four were highly favored by the Lord.

Zacharias was a good priesthood holder, and was faithful in his calling in the temple. While in the inner part of the temple, Gabriel (Noah) appeared to him and told him that their prayers (Zacharias and Elisabeth) were heard by the Lord and were now going to be answered. As a couple, they were already well past the childbearing years, so Zacharias asked for proof as to how this could be possible. He was made dumb, so that he could not speak, until the day his son was to be circumcised. Now before you get down on Zacharias for being a man of little faith, remember that the Lord has had to chastise many of his prophets for showing a lack of faith.

Even with whatever faults Zacharias had, he was worthy enough to be chosen to raise one of the greatest men the world has ever known (Matthew 11:11). He was also worthy enough that when John was named at eight days old, Zacharias was filled with the Holy Ghost and prophesied about the work John would do in saving many in Israel. He identified that John’s mission was to come in the spirit of Elias (Elijah), to turn the hearts of the fathers to the children. John also came in the spirit of Elias – one who came to prepare the way and restore that which was lost. John’s mission was to prepare the way for the Savior of the world.

Note that even after having seen an angel, and having been struck dumb for his doubts, Zacharias still finished his duties at the temple before going home to communicate with his wife the marvelous news that they were finally going to have that baby they had always wanted. He was dutiful, and the Lord loves it when we fulfill our duties and obligations to him.

Elisabeth was a good woman, and highly favored of God. For His own purposes the Lord made her wait until she was already past the childbearing years before answering her prayers and giving her a miracle child. And what a miracle child! We know she was worthy of the Spirit, for when she heard the sound of Mary’s approach, and John leaped in her womb for joy, she was filled with the Holy Ghost and praised the Lord and acknowledged that Mary was the mother of the Lord.

Mary was told twice by Gabriel (Noah) that she had had found favor with God. The first characteristics we see in Mary is her humility, and her willingness to do anything to please the Lord. God would need someone of such perfect obedience to raise his son.

When Mary asks how it is possible for her to conceive when she had known no man, she was not challenging what the angel had told her, but asking the obvious. She was engaged to be married, but the way the angel was talking, this conception would happen before her wedding. She was only asking how it was possible for such a thing to happen. When Zacharias questioned the angel on his having a child, he knew how it would happen, he just didn’t think it could.

When Mary went to visit Elisabeth and Elisabeth proclaimed Mary to be the mother of the Lord, Mary displays a good understanding of how this child fit into the prophetic fulfillment of the promises God had made to Israel. Her singular sense of gratitude for the great blessing she had been given, and for all that the Lord had done for her is striking. She immediately gives all praise and glory to the Lord. Indeed, as she told Elisabeth, “My soul doth magnify the Lord …”

Joseph was put into the most awkward parental position in the history of the world. He loved Mary, and was a kind and generous man. But Mary was carrying someone else’s child. He could have had her publicly shamed and punished, but he decided to do the right thing and break off the engagement secretly so as to not shame Mary. Before he could do it he was visited by an angel in a dream and told that this was no ordinary child, and that the Lord wanted him to go through with the wedding with Mary, for she was carrying the son of God.

So Joseph marries the woman carrying not just another man’s child, but God’s child. He respects Mary and keeps his distance from her until after the baby has been delivered. He then raises this perfect child as his own, teaching him all the things he would need to know for the culture in which they lived. Both Joseph and Mary were of the lineage of King David, and it had been prophesied that the Messiah would be born of the lineage of David. Whether Mary was of the line of David is debated, but legally, if the throne of David still existed, Christ would be the next in line, being the oldest male son of his legal father, Joseph.

We know that John magnified the Lord by fulfilling his calling, and doing it well. He brought many to Christ, and was fearless in his calling as a prophet. The other four we have discussed all did the same. They were obedient and humble. They fulfilled their assignments from the Lord and expressed gratitude to him and acknowledged his supremacy in all things. This is how they magnified the Lord. They took no credit for the blessings they had been given. They were not puffed up for their privileges. They remained steadfast in their knowledge that they were blessed to be able to know the Lord’s will so they could follow His directives.

We are no different than they. If we want to find favor with God we have to put God first in our lives. If we want to be blessed with spiritual privileges we must be obedient to what we receive. Only then will we be given more. When we openly give the Lord the credit for the good in our lives, and express our acknowledgement of his goodness and blessings in all things, we too are magnifying him. One of the basic definitions in the Church is that to magnify your calling, just do the work the calling demands, and the Lord will enlarge you for your service. As we magnify Him, so too does He magnify us.