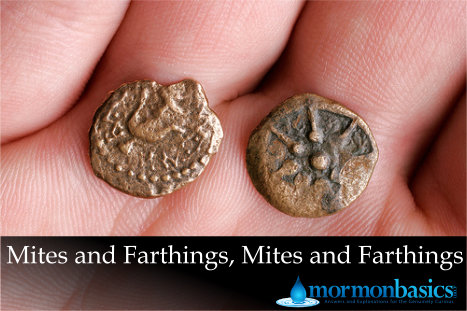 We hear of the widow’s mite in the scriptures. When Jesus was watching people give their offerings to the temple treasury, many wealthy men put large donations into the temple coffers, and people were very impressed. But then a widow came along and put in two mites. Jesus used her donation to teach his disciples a lesson, which I will get to in a moment.

History of mites and farthings

In the days of Jesus, the coin known as a mite did not exist. But a coin of Dutch descent, called a mite, did exist in England when the King James Bible was being written. The use of the term mite is to demonstrate the point of the lesson being taught, not a plot to lead us all astray by substituting a false coin. In the days of the King James Bible there were two well-known coins that occupied the bottom of the monetary ladder, mites and farthings. If you took a British penny and cut it into four pieces you would have four farthings. I guess the King got tired of people cutting up his coins, so eventually he created an official coin that was worth one fourth of a penny, the farthing. The word means “one quarter.” The mite is an older coin that fills the same slot, it is only worth a small fraction of a penny. Both coins were known and used in the days of King James when the King James Bible was translated.

Back to the widow’s mite. What made her two mites worth more than the contributions of those who gave so much to the treasury? The point of this story is that those who had much could afford to give much, and they were still wealthy. But this widow, in all her poverty, gave the last of her money to God’s temple. Her’s was an ultimate sacrifice, because now she had nothing at all left. This act of faith is what the Lord was pointing out to his disciples.

On the surface Matthew 5:25-26 warns us that if we are stubborn and get thrown into jail, we won’t get released until we have paid the “uttermost farthing.”

26 Verily I say unto thee, Thou shalt by no means come out thence, till thou hast paid the uttermost farthing.

The term “uttermost farthing” has come to represent payment to the full extent of the law. This means that someone paying to the uttermost farthing will receive no mercy, only justice, and will continue to suffer until every ounce of justice has been satisfied. Kind of a scary thought.

In both cases mites and farthings represent extremes, extreme poverty and extreme faith, extreme punishment, and receiving the full extent of the law of justice, unhampered and untouched by mercy. We generally use the word mite to represent great faith and sacrifice, and the word farthing to refer to suffering under the law.

First let’s compare the widow’s sacrifice to the rich man’s sacrifice. The thing that made her contribution to the temple coffers was that her little coins represented everything she possessed, while the rich man, though he gave much, still had far more at home. How does this point us to Christ? 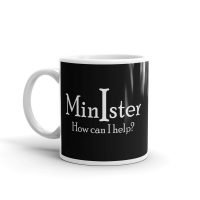 Show others you are willing to help with an I Minister Mug. No words needed.

Why do you think we drink water and eat bread when we participate in the sacrament? What do those two emblems represent? The water represents Christ’s blood and the bread represents his body. Have you ever wondered why he might have chosen those two things to represent his sacrifice on our behalf?

When Jesus came to earth it was to do his Father’s will. With all the power he possessed as the Son of God and as the most powerful child of all God’s children, his only concern was that he fulfill his Father’s will to save God’s children. Christ’s capacity is so vast that we cannot comprehend it. He has more intellectual ability than all of God’s children, and more capacity to love purely than anyone of us as well. His humility and meekness is unsurpassed. Yet for all his greatness and capability he was willing to do literally anything God required of him to bring about the salvation of his brothers and sisters.

But how much of himself was he willing to give? When he was in the garden of Gethsemane he suffered for the sins of all mankind. We can’t even imagine how much he had to suffer. But at no point did he ever say, “Enough! I have given enough. No more!” He did ask multiple times that our Father remove the pain and suffering he was experiencing, but instead of thinking only of himself he said, “Thy will be done.” He was even willing to suffer so much that he bled from every pore. This is something we can’t even fathom.

When Jesus was on the cross he knew that all he had to do was call out for help and a legion of angels would have answered his call and come to his rescue. At no time was Jesus ever forced to suffer for us. All his suffering on our behalf was done willingly. He never held back and only gave of himself up to a certain point, but no further. He was willing to give us his all. Nothing was withheld from us. Even after the spiritual punishment he took for us he was willing to continue his punishment on our behalf by experiencing humiliation, shame, scourging, and finally crucifixion itself.

This is what the widow’s mite represents, her all. By giving those last tiny coins, as small as they were, it demonstrated to God that she would withhold nothing from him. She was willing to submit to him in all things, just as Christ was willing to submit to the Father in all things. This act of complete submission is what sanctified her offering and made it holy. It truly was a Christlike gesture in the purest sense of the word.