What do Louis XIV and Lucifer Have in Common?

What do Louis XIV and Lucifer Have in Common? 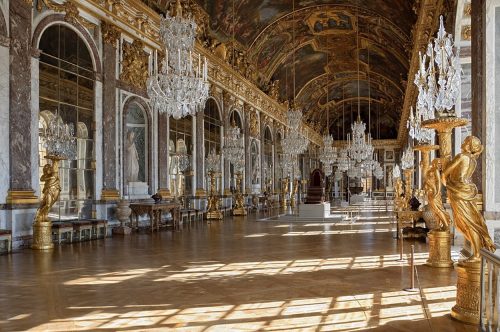 I came straight out of bed with the realization that what I had witnessed a few hours before on television was something I had seen elsewhere, but far more masterfully done. While watching a show about King Louis XIV, the Sun King, I saw the life of a king of France imitating the great Deceiver himself, without him even realizing it. Louis had a problem to solve, and he came to the realization that his best solution was the same tactic Lucifer uses on us, though Lucifer takes the art of diversion to a whole new level.

When Louis took control of his country from the regents who had helped him run it from the time his father died when he was young, the power base of France was scattered. Nobles were often more wealthy and powerful than the king himself. Many of them wanted Louis dead.

The home he lived in just outside of the village of Versailles was big, but had been used primarily as his father’s hunting lodge. It was about 20 miles away from Paris, the center of power in France. Louis envisioned the day when his home, not Paris, would become the center of political power for the country. But what to do about all the nobles who ignored his edicts and commands? How could he bring them to heel, so to speak?

His plan was to enlarge his home and make it a splendor that would rival anything existing in the world, and make France the envy of the nations. As part of his plan he began to enlarge the house to include whole wings with apartments for the nobles to live in while at Versailles. He actually required that they come and live for portions of the year at court, away from their own homes.

This new arrangement took the focus off Paris, and placed it on the new center of government at Versailles. But what to do with all the plotting and scheming nobles? All of them wanted to curry favor from the king and further their political reach. What could be done to keep them from accomplishing their individual aspirations for power?

In the show I was watching, the king decided that the only way to control this herd of cats they called the nobles, was to keep them so busy with something else they couldn’t achieve what they wanted. To this end he established a whole culture of courtly etiquette. There were so many rules and layers of expectation that it literally consumed whole hours of their day just to fulfill their obligations of behavior.

I remembered watching a movie about the notorious Marie Antoinette of “Let them eat cake” fame. She was in Versailles as a new bride. It was her first morning there and it was time to get dressed. The bedroom was full of people, all with some function or another, but most just seemed to be expected to be there, even though they didn’t actually do anything.

She got out of bed and the maids removed her nightgown. A woman came up and began to put her clothes on her, but just as she started the process, someone else of higher rank walked into the room, and the woman had to stop and turn the process of dressing Marie over to the higher ranking woman. Just as she began to dress Marie, another, higher ranking member of the household entered the room, and the process was repeated once again. This happened about four or five times, until her mother-in-law entered the room and she was finally able to get her clothes on.

As ridiculous as this seemed, and as many examples of this kind of rule system as was demonstrated in that show, that is what life was like at the palace. It was so convoluted and so complex that no one dared to even question the routine – you just learned the ropes and lived with it.

Lucifer/Satan knows that the easiest way to prevent us from becoming what we want to become in this life, and preventing us from doing what we came here to do, is to take our minds off our goals and to keep our attention on any rule or system that occupies us and prevents us from getting back to our true desires.

It doesn’t matter how fancy or clever the diversion is, as long as it works. In the book, The Screwtape Letters, Screwtape, the training devil, tells his trainee that he doesn’t have to get a man to commit murder to keep his soul out of heaven if something as simple as playing cards will do the trick. This is profound wisdom.

If your aim is to travel to Boston, and you are starting from Denver, how many side roads will you have to take to miss getting to Boston? Does it matter if you miss Boston by a mile or by three states? Either way you don’t end up in Boston. This is the point Screwtape is trying to make. If Satan can get us to take our eyes off our goal and take even the smallest of detours, he knows that it will take a lot of effort for us to get back on track, if we ever do at all.

We even have sayings in English that discuss this principle. “A miss is as good as a mile.” “Close only counts in horseshoes and hand grenades.” Such statements illustrate the point that Satan doesn’t have to all out win our souls to still win his battle against God. He only needs to keep us out of the celestial kingdom to gain a victory.

He knows he won’t actually gain many in the end who will be cast out with him, but he will have succeeded in preventing most of God’s children from receiving ultimate happiness because of his success in the use of diversion to keep us occupied in pursuits other than returning home to that God who created us.

It isn’t easy to see through the trappings of the culture in which we are raised. We are so accustomed to the routines, the expectations, the social regulations that it is hard to tell what is necessary and what is just a diversion to keep us occupied so we don’t accomplish what God wants us to accomplish.

When the prophets tell us to pray, study the scriptures, and serve in the temples on a regular basis, they are giving us a way to keep on the right course. By living so that we have the influence of the Holy Ghost in our lives, we are less likely to take any of those side roads that will derail us from reaching our final eternal destination.

What do Louis XIV and Lucifer Have in Common