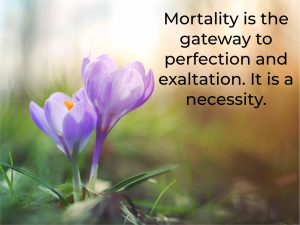 Photo by Aaron Burden on Unsplash

Eve has had a bad rap for too many years. In my whole life I have not heard more than a handful of nice comments about her. She was the person who blew life in paradise out of the water. She was gullible. She was silly. She brought calamity down on the whole human race. Why did she do this? Supposedly it was because she was too weak to resist a piece of fruit, so she bought the first sales pitch thrown her way. This is what I was raised with.

Adam wasn’t much better. When asked why he ate the fruit he immediately blamed his wife as the reason for his indiscretion. He was as weak as she was, and just as silly. Not a good start to the race. Not good at all.

Choosing to become mortal was not a simple decision. By definition, mortal means cut off from the presence of God, who is immortal. God has declared that he cannot tolerate sin with the least degree of allowance. That literally means that it doesn’t matter how small the sin or transgression; if there is even a tiny hint of disobedience, you must leave His presence and never return. God lives in a perfect sphere of existence. Willfulness is not tolerated. The laws by which God lives grants him and those around him perfect and complete happiness. Sin in any variety, form, or degree would destroy that happiness, so it is not tolerated.

The Plan of Salvation, as set up in heaven before the earth was created, called for a Savior to redeem mankind from their sinful and fallen state. But wait, they had not sinned, and were not fallen, yet. Unless we were provided with a savior to redeem us, we are not capable of living a perfect life, and therefore we would all be cut off from the presence of our Father in Heaven forever. So we all knew we were not going to be perfect before we came here. We knew we needed a savior to help us return to our Father.

One of the requirements of Eden was that Adam and Eve had to make the choice to become mortal. Problem was, because they had not broken any commandments, and still lived in the presence of God and Christ, they were innocent. They did not understand evil, joy, sickness, or anything else that is mortal in nature. They were like little children. The Lord had to provide them a way to make the choice to be mortal or stay the way they were. But if they chose mortality, it had to be by doing something so small as to be almost inconsequential or it wouldn’t be fair to them, because they were like little children. And the Lord is certainly not someone to take candy from a baby or something equally mean. So He gave them a choice.

This choice was not between good and evil, because they wouldn’t have understood it. This was a choice between something very good and something even better. Either choice would have been praiseworthy. But God threw in a commandment that they were not to eat the fruit that would allow them to experience the best thing of all, mortality. Mortality is the gateway to perfection and exaltation. It is a necessity. Obeying His commandment to eat of every other fruit, but of the Tree of Good and Evil, would have guaranteed their place in the Garden of Eden forever.

It is true that they would never have had children, never known true joy, never understood any of the greatest of God’s qualities, because they would have remained as little children. In their state of innocence they could eat from the Tree of Life and live forever in paradise. It was a great place, but it was a second rate place when compared to the life God lives. But they did not understand that, so no harm, no foul. Right?

Adam was a typical male of the species. He was focused and loyal. He was determined to be obedient, no matter what. When Satan came a calling, Adam flatly refused to listen to what Satan was peddling. But Satan went to Eve, who was also typical of the female of the species. She was all the things Adam was, but whereas men tend to compartmentalize things, women see things as a whole or as a big picture.

We don’t have any idea if Adam and Eve had discussed the commandments they had been given, or if they even really understood them. If they were truly innocent, my guess is they did not understand what the full consequences would be if they decided to fulfill the first and greatest commandment, to multiply and replenish the earth. They were married, but as emotional children they did not as yet have any desires toward each other in the Biblical sense.

Satan came to Eve and talked to her about eating the fruit. What was truly discussed is unknown, but this much we do know. Eve realized that the most important of the two commandments was to have children. That meant they needed to be mortal, which is what would happen if they ate the fruit. She also knew that by eating the fruit she would no longer be allowed to live in the Garden of Eden with Adam. If they were to remain together as husband and wife, he would have to eat the fruit also, but he had already turned it down.

Ladies, tell me when this starts to sound familiar, like conversations you have had in your marriage before. Eve was lied to. Satan was not above taking candy from a baby. He tricked her by misrepresenting the truth, but he did show her the bigger picture. She was convinced that this is what they needed to do. She ate the fruit.

Eve may have believed that Adam would, of course, eat the fruit if she had, because otherwise he would be left alone, and they were supposed to stay together. But she did not know that. Adam still had his agency, and could have refused to eat the fruit. That would have been messy for sure. She risked everything to do what she did. Eve literally put her life on the line to live by her decision to eat the fruit. It was a very brave thing to do, considering she didn’t really know what the real outcome would be.

Fortunately, Adam did eat the fruit, but only once she pointed out the obvious to him. She showed Adam that they were commanded to have children, but since she would be out there, and he would be in the Garden, if he didn’t eat the fruit they would never be able to have children. Adam could see that because of what she had done, in order for him to be as true to God as he could be, he simply had to eat the fruit also.

When all was said and done, Adam and Eve were blissfully happy that they had chosen mortality over paradise. They realized, once their eyes were open and they could comprehend good and evil, that they had actually chosen the better part. By partaking the fruit they became mortal and now needed a savior to redeem them from their fallen state. But now they could have children, comprehend godly things, learn godly ways, and develop godly character traits. All this was because of their Savior, and Eve’s initial choice to obey the greater of the two commandments.

I don’t listen to those voices bad mouth Adam and Eve any more. I especially don’t listen to anyone put down the Mother of my race. Eve was a noble, intelligent, great woman, who had to rely on her own intuition, her own understanding, her own judgment, and her own knowledge of the love of her husband, to make one of the hardest decisions in history. In her own words (Moses 5:11), here is what Eve had to say about her decision:

And Eve, his wife, heard all these things and was glad, saying: Were it not for our transgression we never should have had seed, and never should have known good and evil, and the joy of our redemption, and the eternal life which God giveth unto all the obedient.

It is true that Adam and Eve transgressed one commandment in order to obey a better one, but what a blessing they did! Now all of us can experience the joy of our redemption and “the eternal life which God giveth unto all the obedient.”