It Pays to Have Faith in the Brethren

It Pays to Have Faith in the Brethren 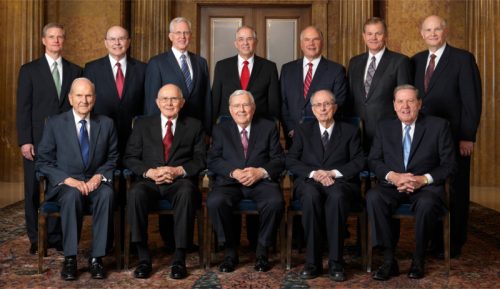 When the Church clarified its position with regards to the spiritual status of those who enter into same-sex marriages or relationships, and then clarified the position of how the children of those relationships were to be handled, many in the Church were devastated. For many, faith in the Brethren was significantly shaken. I wrote an article about How The Policy of Same Sex Couples Affects Us All. In that article, I encouraged everyone to have faith in the Brethren and in their collective wisdom. They are, after all, prophets and revelators.

For a week after the announcement was made confusion and debate raged across the Internet and through all the channels of social media. Today, 11/13/2015, the First Presidency came out with a further clarification of their policy.

I wrote the article linked above because when I first heard the news about how the children of same-sex marriages were going to be dealt with I panicked. I have grandchildren who live with their mother, but their father left her to pursue a marriage with his boyfriend. I worried about how that would affect them since they have court-ordered visitation, including a month-long visit in the summer each year. At first it appeared the grandsons would not be able to receive the priesthood though all of them have recently been baptized.

It took a couple of hours of tears and weeping over the pain this would engender in our daughter and her family before the Spirit reminded me that it didn’t matter what the Brethren’s decision was regarding them because the Lord will not abandon them. I learned years ago through a harsh lesson that the Lord does not abandon those who follow the Brethren. I would like to relate a little of that experience to you.

Years ago, I divorced my wife and moved the children to southern Utah. We lived in a small rural town and we loved it there. I did my best to find employment and got into school to finish my degree so I could properly support the family. The Church was helping me with rent and food for a few months while I got all the arrangements made to support myself through grants and scholarships while I went to school. I had just two months to go before all the monies I had arranged for kicked in when I was called into the Stake President’s office.

I sat there across from the whole Stake Presidency and was told that I was being irresponsible for trying to go to school to support my family. I was told to go get work, and if necessary work multiple jobs to support them, for “no self-respecting woman would think of living off the Church when she had a family to feed.” I’m not a woman, so that was meant as the ultimate slap in the face.

I went home devastated. The Church had basically told me to get out of town. All help had been withdrawn, leaving me no way to pay my rent or get food. Mind you, I was a full tithe payer and active member of the Church, but this was a small farming community, and they had a different way of looking at life than someone from town. I have never been so angry and have never felt so abandoned by all I held dear. I had always been taught that if family couldn’t help me the Church would always be there as back up. Single fathers weren’t common back then, and all the government programs were designed only for single women. They didn’t know what to do with a man who had children.

I was lost. It was as though all the lights had gone out and my path had disappeared. My Church leaders had ordered me to drop out of school and go to work, but there was no work available that would support my family. Multiple jobs would barely cover it, but then that would leave my children without anyone to care for them. They were already damaged from the situation that caused the divorce. I couldn’t abandon them in their current state. I didn’t know where to turn.

April Conference happened right about that time. Talk after talk seemed to be directed to me. Follow the Brethren they said. Even if they tell you to do something you don’t believe is right, if you will follow your Church leaders the Lord will bless you for your faithfulness. It felt like I had been led to the edge of a precipice and was being told to take a step out into the black void. I knew, with every fiber of my being that if I did so I would fall to my death. Yet that is what the Lord seemed to be requiring of me. I knew that to follow my Church leaders would require me to become homeless with four children. I had the public stigma and shame of being kicked out of town by the Church itself.

I knew I could not forsake the Church. I would not be able to live with myself if I abandoned my testimony of the Lord and His kingdom. So I wept and plead and cried and wept some more, and finally packed up my things, dropped out of school in the middle of the semester, and moved out of town. I spent the next four months moving my children from home to home, and empty apartment to empty apartment, anywhere someone would let us sleep for the night.

Finally, we were at the end of all our resources. The next day we were going to lose our last option for housing. My faith was exhausted, and I went and cried bitter tears and told the Lord it was too much. I couldn’t bear the thought of having to sleep with my children in the car, I begged Him to not make me do that. I didn’t know how much further I would have to go to prove myself to Him, but I begged that I wouldn’t have to go that far though I knew of others who had done that very thing.

The next morning, to my surprise we were offered a full-time job before lunch. By mid-afternoon, I had an apartment secured for my children. I was floored. I was delirious with joy that the Lord had stepped in and rescued me when I felt I had reached the end of my ability to cope anymore. As I knelt to thank the Lord for His blessings of work AND a place to live, I was filled with the sweetest assurance that the Lord was keenly aware of me and my needs.

To this day, I know as well as I know I live and breath, that no matter what happens to me, no matter how hard things get, the Lord is never out of earshot. He may not have anything to say to me for the moment, but he is absolutely aware of what is happening in my life. He will let me suffer what I need to suffer through until I have learned what I need to learn, and only then will he step in and help me out.

This is where my faith in the Brethren comes from. The Lord led me through my personal valley of the shadow of death to show me that I am never outside His loving and tender mercies. I know that those children who are affected by this policy on same-sex marriages and relationships are being watched over by our Father in Heaven. His prophets and apostles are mindful of them. This policy is for their benefit, whether we see it right now or not. I know that when we follow the Brethren, our lives are blessed. I know that anyone who will put their faith in the Brethren, and follow the counsel of their Church leaders, whether they agree with their leaders or not, will be blessed and prospered in the end. This I know.