How Jack Learned about the Atonement from a Stack of Chairs

How Jack Learned about the Atonement from a Stack of Chairs 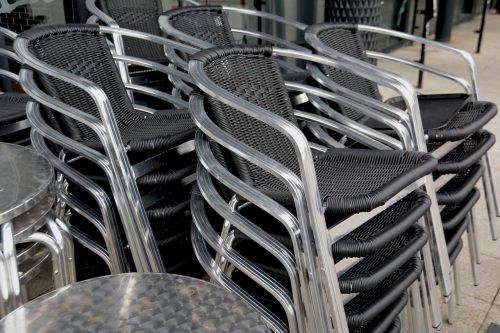 The Lord has infinite ways to teach us. We just have to make the right connection, and almost anything can become a lesson in good versus evil. In this story about Jack, he learns some important lessons about himself, and his relationship with his Savior through a stack of chairs.

Jack and the stack of chairs

Jack stood out in the cold fall weather and stamped his feet to keep them warm. He hugged himself for circulation then stuck his hands back in his pockets. The lot at the local super store was still pretty empty at that early hour, so he felt he was completely alone. What happened here this morning would go unnoticed by anyone.

A lone stack of folding chairs sat on a pallet just a few feet away. The patio furniture was hardly in demand with the temperatures dropping like they were. Most of the stock had been sold, but there was this one stack that caught his eye. Jack wanted those chairs. He could use those chairs. Only problem was, he couldn’t technically afford them. His money was earmarked for other bills. Those chairs were in the luxury category, since they weren’t a necessity, and they weren’t actually budgeted for.

Moments before Jack had seen someone else walk off with the only other stack of chairs, and he hadn’t apparently gone in to pay for them, so Jack figured the guy was just taking them, since no one was out patrolling the parking lot. The thought entered his mind to do the same. The coast appeared to be clear, and it looked like it would be just a quick snatch and grab and he could soon be home, warm again, and with a new stack of chairs that didn’t ruin his monthly budget. Sounded like the best of all worlds.

Not thinking clearly in that moment, Jack walked over to the chairs and picked them up and started towards his car. As he approached his car the weirdest thing happened. He was sure those chairs were getting heavier and heavier with each step. When he finally reached his car he set them down with a thump then wiped his brow. What was wrong? Why was his heart beating so fast? And why was he perspiring? He absentmindedly wiped his forehead and looked again at the chairs.

What was he thinking? Was he really about to steal a stack of chairs? He knew he had been raised better than to be doing something like this. What was this going to accomplish? Jack could feel the guilt starting to rise within him like a sick stomach. He hated this feeling. From past experience he knew it didn’t go away with the wishing of it. There was only one way to feel better, and that was to own the chairs the right way, despite the cost. In that moment Jack made a decision, grabbed the label off the stack of chairs and headed inside the building.

When Jack emerged from the building, he headed straight for the car, stuffing the receipt for the chairs in his pocket. His heart was light, and that gross sick feeling he had earlier was dissipating quickly. His mind was at ease. As he approached his car he noticed a man standing close by eyeing his chairs. When he got closer he recognized him as the man who had snatched the other stack of chairs earlier.

The chair thief, assuming Jack was also stealing a stack of chairs wanted to split the stack. After all, it hadn’t cost Jack anything to get the full stack, shouldn’t he be willing to share in his good fortune? The man wasn’t aware that Jack had seen him steal the first stack of chairs. Jack, feeling a little sorry for the fellow offered to sell him some of the stack at half the cost of the chairs. The thief was insulted that Jack appeared to be trying to make money off him when the chairs could obviously be had for free. He felt no obligation to have to pay any price at all for them. Jack’s compassion for the man vanished in an instant, and he told him the chairs were not available for any price.

With that exchange concluded, Jack loaded his chairs and drove home. Since he wouldn’t have use for the chairs until next Spring, Jack hung his stack of chairs on the fixture he had mounted for hanging such things at the back of the garage. He went inside to get warm.

As Jack sat thinking about what had happened that morning, he remembered what he had studied about the plan of salvation in relation to payments. The whole reason we all need a Savior is because we don’t have the capacity to pay for the sins we commit. If we could pay the price required then we would have no need for Jesus and his atoning sacrifice. It would be excruciatingly painful, but we could have paid the price of all those broken eternal laws on our own.

It was then that Jack realized that Jesus paid for his sins, because Jack couldn’t pay for them himself. No matter how desperately Jack wanted redemption from his own stubborn and willful ways, only Jesus could afford the payment. Jack thought of the thief who wanted to bargain with him for stolen goods. Jack thought, “Do I do that with Christ?” Jesus had indeed paid for his sins, but Jack still couldn’t pay him back in full, because he didn’t have the capacity.

That is when Jack realized that Jesus paid the full price, but he only required Jack to pay what he could. Jesus owned the disposition of Jack’s soul for the sins he committed, and as such could demand any amount he wanted. But because of his love for Jack he only required what Jack was able to pay to be forgiven of his sins. Jack remembered his conversation with the thief. Jack had paid the full price for those chairs. It was his right to set the price for any chair he wanted to sell, because he owned them outright. The thief had no bargaining power, for he wasn’t willing to pay anything for the chairs. Under these conditions the thief didn’t have a leg to stand on. Jack could demand anything he felt was reasonable. Unfortunately for the thief, he was not willing to pay anything, even when offered a really good deal.

Jack finally understood why he had to suffer for his own sins. He also finally realized that what suffering mankind is required to undergo for the sins they commit is only a fraction of the real cost of those sins. Jesus has paid the rest of the cost for all of humanity. He even paid for those who would reject his loving offer to pay only what they could afford and were able to pay. These, like the thief Jack encountered, would have to pay to their fullest extend when brought to the judgment bar one day. And those who are willing to repent and pay the reduced price Christ offers us will be free and clear of any wrong doing, because the price will have been paid in full. We will be guilt free, and completely absolved before God. We just have to be willing to accept Christ’s offer to be forgiven and be willing to pay our personal price for the sins we commit.