Old Testament 18 – Be Strong and of a Good Courage

Old Testament 18 – Be Strong and of a Good Courage 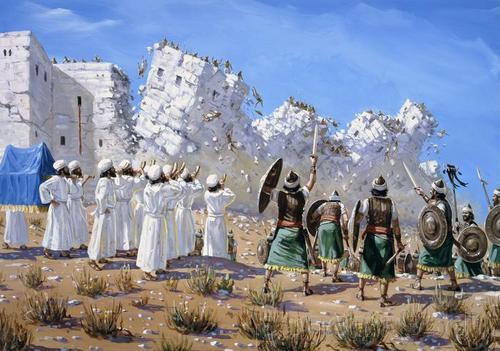 One of the more difficult lessons we have to learn from ancient Israel, is that the Lord always destroys the wicked. Always. Any society that becomes wicked enough, sooner or later gets wiped out. If it isn’t by another society then the Lord does it Himself with plague, pestilence, famine, fire from heaven, or even the earth opening up and swallowing the people and their cities. Think of the destruction in the Americas at the time of Christ’s death. He did the same thing to Sodom and Gomorrah and at the time of the flood. The pattern has never changed. Even in the last days we are promised protection only as long as we are obedient to the commandments. Disobedience will be met with obliteration. (Here is an article that addresses how God views death – How Should I Feel About Death?)

The scriptures tell us that the people in the promised land were wicked and ripe for destruction. The Lord chose to use the children of Israel as His sword to destroy the wicked. In this lesson we have drummed into our heads over and over again that ANY flirtation with the customs and gods of the conquered people will lead to the downfall and destruction of the Israelites. That is why the Lord is so insistent that every man, woman, and child be killed. They simply cannot afford to get entrapped by the religions of these wicked people.

The Lord did not want these people killed because He did not love them. He wanted them to come home because they were past the point of being able to be saved. They were too corrupted. Having Israel carry out the sentence of death upon the current inhabitants of the promised land allowed the Lord to show them His power. Every nation they conquered was a nation stronger than themselves. Only the miracles and power of God could have given Israel her victories.

Every battle, every event, every encounter was designed to impress upon Israel that there is no God besides Jehovah. When Joshua is about to die and he summons all the leaders for one last accounting and to receive his parting instructions, he tells them clearly and repeatedly that obedience to God will bring His continued favor. Disobedience to God would bring certain death and captivity to the people.

This principle is where the title for this lesson comes from. When we are on the Lord’s errand what happens around us is of no consequence if we persist in keeping His commandments. Even if we go to the edge of the light and take a few steps into the darkness, the Lord will light up our path and give us further directions. He never abandons His people. His people will always succeed when they are obedient to His laws.

Israel had been groomed with forty years of miracles to prepare them to enter the promised land and face their real test of obedience. They now had to interact with strangers and strange customs, and still stay true to the Lord. He had kept them safely away from all distractions for a generation. Now they had to go out and mix with idolatrous people and stay true to what they had been taught.

The third item of preparation for this lesson is a suggestion to ask someone to retell the battle of Jericho as though they were an eye witness. I thought, “This would be a difficult assignment.” So I decided to try to tackle it in the form of journal entries from an eye witness. Feel free to use this if you feel like it will help in your lesson.

We have passed through the Jordan river on dry ground. The water actually stayed upstream and built itself into a heap, but stayed upstream until all of the hosts of Israel had passed through, leaving only the Priests who carried the Ark of the Covenant standing in the middle of the river bed. Joshua called them to come up to dry ground. They looked small and alone in the middle of the riverbed. As soon as the last priest set foot on dry ground God released the waters and they came rushing down, overflowing the banks of the river as it surged passed us. It was a true miracle.

We have 40,000 men of war in our ranks. We are supposed to attack the walled and fortified city of Jericho, but we have to observe Passover first, so it will be a while before we can prepare for battle. We received word from Joshua that all the men were to be circumcised before the Passover. It was a painful couple of weeks, especially the few days after the circumcision when the fever was at its worst. But everyone was fully healed before the Passover.

The last many days have been wonderful and marvelous. All of the fighting men were ordered into a broad band of men and marched before and behind the priests carrying the Ark of the Covenant. There were priests blowing seven ram’s horn trumpets the whole time we marched around the city of Jericho. It is a large city, and it took a long time to walk around it. We were commanded that not a word was to come out of our mouths, not a sound from our throats during our march around the city. But the priests blew their trumpets the whole time. That was all we did, walk around the city once, then we returned to our camp.

The next day we did the same thing, got into formation, and followed the blaring trumpets in silence around the city of Jericho. The people on the walls look frightened. We did not attack. We just walked in silence, except for the trumpets announcing the Ark of the Covenant approaching.

Day three was the same. Day four was the same. Days five and six, the same. We have been promised that tomorrow will be different. Tomorrow the Lord will deliver the people into our hands. Joshua said that the walls are going to fall down. I’ve never heard of anything like that happening before, but that is what he says will happen. I guess we will see. We have seen so many mighty miracles by God’s hand, I suppose He can do this as well.

Tired. So tired. We got up extra early yesterday because we would have to walk around the city seven times. We walked the better part of the day, in silence, just as before. The priests were still there with the Ark and the ram’s horns, but we were as quiet as death. Well, the marching of 40,000 men isn’t exactly quiet. The ground always trembles when that many of us walk together. I’m sure they could feel us walking around the walls from within the city. Everything in the city must have trembled from the movement outside the walls.

After the seventh time around the city we stopped for our instructions from Joshua. He told us to wait until we heard the long blast from the horns, and then we were to shout with all our strength. We were told to kill everyone, but not to touch the harlot and her household, and that all the treasure was to go to the temple. Then it happened.

There was  a momentary pause, like the earth herself was inhaling, then the trumpets let loose with a long steady blast. From the army that encircled the city of Jericho rose a shout of 40,000 men of valor. Every man’s lungs bursting. The sound was deafening, and in the middle of the noise rose the cracking and sounds of walls crumbling before our very eyes. The walls of the city literally gave way, as though every stone had been set free to go where it wished. The entire city was laid bare before our eyes. Panic broke out within the city. Screams from the women and children of Jericho filled the air.

If we thought the first shout was loud, you should have heard the next shout as the men rushed in to take the city and slay its inhabitants. The Lord truly delivered them into our hands. This was a miracle like none other. The Lord is truly fighting our battles for us now as He has since our fathers came out of Egypt.

Be Strong and of a Good Courage