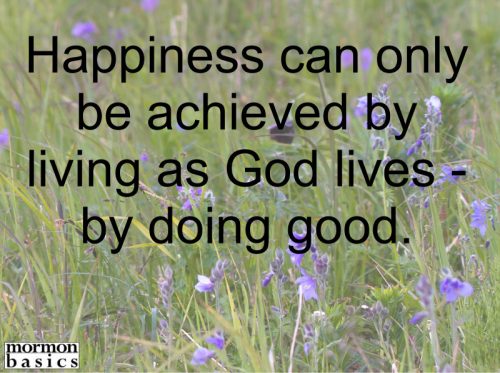 “Whatever makes you happy.” It’s a saying we hear all the time. But do people really mean it? Or is it just an excuse to avoid an awkward or touchy subject? Can we really do whatever we want and still find happiness?

Wickedness is not happiness

I loved watching the April 2017 General Conference. It is always a time I look forward to. We have our Conference weekend traditions of quiche and muffins and I always watch for my favorite speakers. This particular April Conference brought me a new favorite speaker. Brother M. Joseph Brough, Second Counselor in the Young Men’s General Presidency. His talk was called “His Daily Guiding Hand.” The subject is fairly self-explanatory, but there was one passage in particular that I just can’t stop thinking about.

The passage is this:

Alma declared, “Wickedness never was happiness.” Tolerating improper behavior without loving correction is false compassion and reinforces the common notion that wickedness might in fact be happiness. Samuel the Lamanite clearly countered this notion: “Ye have sought for happiness in doing iniquity, which thing is contrary to the nature of that righteousness which is in our great and Eternal Head.”

What a profound teaching! We are all familiar with the passage that wickedness never was happiness, a phrase that often goes through my mind when I find myself miserable as a result of poor decision making on my part. It never occurred to me however, that simply turning a blind eye or keeping a silent tongue in the face of bad behavior of others is also a form of wickedness.

In today’s world, we hear common phrases like “don’t judge me,” “whatever makes you happy,” “love has no boundaries,” and “YOLO” (you only live once). These sayings tend to shut most people up. It has always bothered me though. Shouldn’t we exercise at least SOME judgement? Isn’t it also the case that love should have SOME boundaries? Shouldn’t that read “YODO” (You only die once)?

In recent years, we’ve seen a surge in violent behavior, suicide rates and moral decay. Psychology Today reports that the United States has seen a 24% rise in suicide rates across the board since 1999. Most troubling in those figures is that the largest increase in suicide rates is among women, with girls from age 10-14 seeing a tripling in numbers. Experts are trying to figure out where the source of the suicide increase is coming from. Some have pointed to a lack of mental health care and others to economic hardship. But those issues have always existed and while men have traditionally had the highest suicide success rates, the gap is closing.

Perhaps it is time to look at a moral cause. If we, as a society, are not allowed to correct bad behavior because it reflects judgement of others, are we not also buying into the idea that wickedness may in fact be happiness?

What if I am a father, and there are times when my children engage in behavior that I know is not right. But sometimes I might think, “What’s the harm? No one will get hurt, and they are happy.” What moral principle is being taught through my action, or lack thereof? For example, if I let my daughter wear revealing clothing because it is hot, am I teaching her that showing respect for her body and encouraging others do the same is more important than temporary comfort? I think not. I believe this is exactly the kind of thing Brother Brough is talking about. False compassion is turning a blind eye to behavior that will only lead away from eternal happiness, because it is inconvenient or uncomfortable for me to do or say anything about it in the present. True love is a principle of loving beyond the now, beyond the current comfort level. Jesus always loved the sinner, but he never let the sin go uncorrected. He loved the person too much to let that happen.

Can we as members of the church honestly say that support of such practices as gay marriage is showing true caring and compassion for gay people? I don’t think so. If caring for an individual’s eternal happiness is true compassion then we cannot support a union which would jeopardize the attainment of an eternal family. Note that this is different than loving the individual, which we must always do. What I am calling into question are practices of those whom we love that will not bring them eternal happiness.

This brings us to the next point in Brother Brough’s statement. “Ye have sought for happiness in doing iniquity, which thing is contrary to the nature of that righteousness which is in our great and Eternal Head.” I have heard good Latter-day Saints make comments accusing the Church of being “behind the times” on certain moral issues. The church’s stance on homosexuality is a particularly common sore spot for many members. The recreational use of such substances as marijuana and kava is another. These are things that are lauded by the world.

It is unfortunately common that when such behavior is challenged, particularly on moral grounds, there is an instant backlash. Laman and Lemuel summed up this reaction succinctly in 1 Nephi 16:1 “…Thou hast declared unto us hard things, more than we are able to bear.” The wicked taketh the truth to be hard. Cain had the same reaction to the Lord’s punishment for the murder of his brother. His reaction and fear of punishment can also be described by Proverbs 28:1 “The wicked flee when no man pursueth..”.

It is small wonder then that the scriptures tell us that wickedness never was happiness. When we try to defend our sinful behavior, we are feeding our pride. It takes humility to recognize when our behavior is not constructive and then to change that behavior.

But what is the catalyst for change? Simply put: a challenge. If wrong or immoral behavior is not challenged by a loving observer, individuals will continue in their sins since they have already mistaken pleasure for happiness. A loving, gentle but firm correction is needed or the individual may never see any error in their ways and fall into a deadly trap of complacency in their new norm. What did the Savior do when he saw people committing sin?

The last thought I have on this subject is this: a correction given in love is not judgement. It’s love. When we correct with the intention of improving others, not tearing them down, it is an act of love. The person or people may scoff, or even respond in anger as Laman and Lemuel often did when Nephi lovingly chastised them for their unrepentant and wicked behavior. But if they can humble themselves even a little, they may thank you for your concern.

If we want to know what will make us TRULY happy, we can look to the scriptures and to men and women who love God, then follow their lead. If the natural man is an enemy to God then we must put off the natural man and strive to align ourselves and our habits with God. If it is true that wickedness never was happiness then righteousness is the only way to find lasting happiness.

About the Author: Paul Merrill

Paul lives in Indonesia with his wife and two children where he engages in multiple entrepreneurial endeavors.