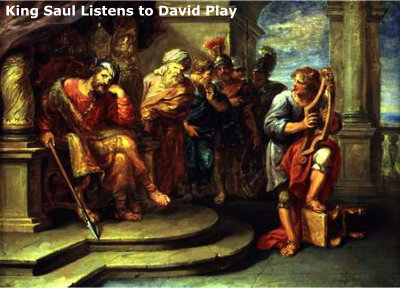 When I think of the doctrine that we are eternal creatures, I think of modern revelation. It is Joseph Smith who teaches us about the premortal life, about the three degrees of glory, and about our potential to progress to become like God. What surprised me was when I was reading in the Psalms and found this same doctrine. I was surprised, as I always am, to discover that this basic knowledge has always been around.

I think of King David in ancient Israel, who is known for his songs (psalms) composed for the harp and court instruments. I have always thought of these songs as having been composed in David’s youth to comfort the ever irritable King Saul, who became more and more paranoid of his power as he grew in age. I honestly do not know how accurate my perception is about that picture. I really do not know if David composed his songs all during his life or mostly when he was young and single. I do know that some of them were composed even as he was seeking forgiveness for having killed Uriah when he stole Uriah’s wife Bathsheba. So I guess some of them were composed even while he was king of Israel.

But whether or not he composed until he grew old, I am always impressed by the depth of his knowledge of the ways, character, and relationship he had with his maker. In Psalm 102:25-28 David sings of the permanence of two things, God and His children. All other things, like a vesture or piece of clothing will grow old and pass away, but not these two things. Here are the verses:

25 Of old hast thou laid the foundation of the earth: and the heavens are the work of thy hands.

26 They shall perish, but thou shalt endure: yea, all of them shall wax old like a garment; as a vesture shalt thou change them, and they shall be changed:

27 But thou art the same, and thy years shall have no end.

28 The children of thy servants shall continue, and their seed shall be established before thee.

I like the way he refers to how long ago God created the earth – “of old hast thou laid the foundation of the earth.” We would have just said something simple like “a long time ago.” David lumps heaven and earth into one disposable product, something to be used up then changed out for something newer. He says that both the heavens and the earth will become (wax) old, like a garment, and like an article of clothing (vesture) God will change them for something else He wants in their place.

This is an interesting comparison. When we sit on a hillside at night and look up at the stars and planets in the heavens, we tend to think about how permanent they are and how temporary we are. In the sense that our mortal time is short indeed, we are correct. But David finishes this psalm by telling us that God’s servants and their children, and their seed or descendants after them will be “established before thee.” To be established means to become permanent. We are God’s children, and we, like our Father will last forever. His faithfulness and love will never end for us. The planets and the stars will come and go. God will change them like we change into clean clothes for a new day, yet He and His children will last forever. We will endure.

It is true that some may feel that this last verse only refers to the continuation of God’s covenant with His chosen people Israel. But we should remember that even if that is our view, even God’s covenants are eternal, and not temporary in nature. It is against the nature of God to be fleeting and transitory. Once He has made a covenant and promised that those who make a covenant with Him will be blessed, that blessing never ends. That is always the way it has been, and is the way it will always be. Our Father in Heaven’s business is to glorify His children, that they can share in His happiness. So God treats us as eternal beings in all things. If anyone understands the transitory and temporary nature of mortality, it is God.

I find it encouraging that even back in King David’s day this was understood and accepted as a reality of everyday living. Man is as eternal as God, and is the workmanship of His hands. We may pass from mortality after the blink of an eye in the eternal scheme of things, but the promises and blessings of God never end. God is faithful to His word and in the promises to His children, and we have been promised eternal glory for our obedience to Him.

I invite you to share other places in the scriptures where you have seen evidences of our ancestors’ understanding of their divine and eternal nature.